The United States Army 's enlisted rank insignia that was used during World War I differs from the current system. The color scheme used for the insignia's chevron was olive drab for field use uniforms or one of several colors (depending on the corps) on dress uniforms. The chevron system used by enlisted men during World War I came into being in 1895, and was changed to a different system in 1919. Specification 760, which was dated May 31, 1905 contained 45 different enlisted insignia that varied designs and titles by different corps of the army. General Order Number 169, which was enacted on August 14, 1907, created an even larger variety of enlisted rank insignia. Pay grades were not yet in use by the U.S. Army. The pay system identified the job assignment of the soldier. By the end of World War I, the system contained 128 different insignia designs. [1]

Other ranks and pay grades that held distinctive insignia not shown here included:

A chevron is a V-shaped mark, often inverted. The word is usually used in reference to a kind of fret in architecture, or to a badge or insignia used in military or police uniforms to indicate rank or length of service, or in heraldry and the designs of flags.

The chart below represents the current enlisted rank insignia of the United States Air Force.

Specialist is a military rank in some countries’ armed forces. In the United States Armed Forces, it is one of the four junior enlisted ranks in the U.S. Army, above private (PVT), private (PV2) and private first class and is equivalent in pay grade to corporal, in the U.S. Space Force it consists of the four junior enlisted ranks, prior to the rank of sergeant. 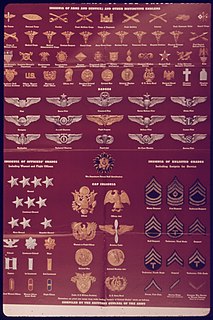 The U.S. Army enlisted rank insignia that was used during World War II differs from the current system. The color scheme used for the insignia's chevron design was defined as olive drab chevrons on a dark blue-black wool background for wear on "winter" uniform dress coats and dress shirts or khaki chevrons on a dark blue-black cotton background for wear on the various types of field jackets and "winter" uniform fatigue shirts. An unauthorized variant that nevertheless saw wide use was olive drab chevrons on a khaki cotton background for wear on the "summer" uniform dress coats and dress shirts. This scheme of rank insignia was established by War Department Circular No. 303 on 5 August 1920 and would see two significant changes in 1942. The usage of this style of insignia was ended by Department of the Army Circular No. 202, dated 7 July 1948, which provided for significant changes in both rank and insignia design.

Quartermaster sergeant (QMS) is a class of rank or appointment in some armed forces, especially those of the United Kingdom and the Commonwealth, and formerly also in the United States.