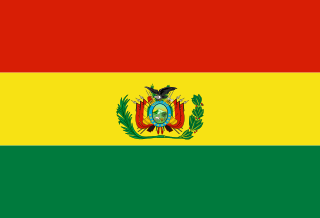 The Armed Forces of Bolivia are official organizations responsible for the defence, both of external aggression and internal Bolivia. They also ensure security, stability, and protect the Bolivian Constitution. 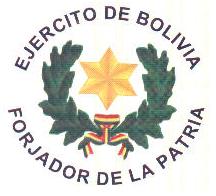 The Bolivian Army is the land forces component of the Armed Forces of Bolivia. On average, the army consists of 31,500 men.

The Bolivian Navy is a branch of the Bolivian Armed Forces. As of 2008, the Bolivian Naval Force had approximately 5,000 personnel. Although Bolivia has been landlocked since the War of the Pacific in 1904, Bolivia established a River and Lake Force in January 1963 under the Ministry of National Defense. It consisted of four boats supplied from the United States and 1,800 personnel recruited largely from the Bolivian Army. The Bolivian Navy was renamed the Bolivian Naval Force in January 1966, but it has since been called the Bolivian Navy as well. It became a separate branch of the armed forces in 1963. Bolivia has large rivers which are tributaries to the Amazon which are patrolled to prevent smuggling and drug trafficking. Bolivia also maintains a naval presence on Lake Titicaca, the highest navigable lake in the world, across which runs the Peruvian frontier.

The Army trains all its personnel in the following:

Despite being a landlocked country, Bolivia has a large quantity of rivers and lakes which the majority of their naval operations take place on, one example of this is Lake Titicaca, [2] which is shared between Bolivia and Peru.

A landlocked state or landlocked country is a sovereign state entirely enclosed by land, or whose only coastlines lie on closed seas. There are currently 49 such countries, including five partially recognised states. 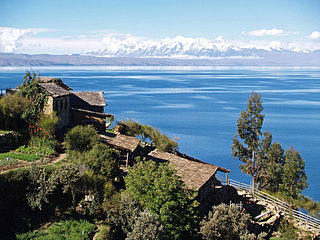 Lake Titicaca is a large, deep lake in the Andes on the border of Bolivia and Peru, often called the "highest navigable lake" in the world. By volume of water and by surface area, it is the largest lake in South America. Lake Maracaibo has a larger surface area, but it is a tidal bay, not a lake.

The Navy, unlike the other three branches, has different specialisations for the NCOs and SNCOs once they reach the rank of 'seaman'. Once a specialisation has been achieved, the sailors' insignia will be adjusted slightly, to make his/her profession more visible. Those corps are as follows:

Any rank between Seaman and Master Chief Petty Officer can have a specialisation as part of their regular rank insignia, the only corps where the insignia varies is within the Machinist Corps, where both NCO and SNCO have a different insignia, this also helps determine their qualifications and what they are responsible for.

The most Senior Non-Commissioned Officer, Fleet Master Chief Petty Officer, holds no specific specialisation but once would have as he/she would have had to work their way up through the NCO and SNCO ranks of the Navy itself. This sailor would also be the overseer of each of the Corps, ensuring that this branch's members are fully trained and equipped.

Sergeant is a rank in many uniformed organisations, principally military and policing forces. The alternate spelling, "serjeant", is used in The Rifles and other units that draw their heritage from the British Light Infantry. Its origin is the Latin "serviens", "one who serves", through the French term "sergent".

Sergeant major is a senior non-commissioned rank or appointment in many militaries around the world. In Commonwealth countries, the various degrees of sergeant major are appointments held by warrant officers. In the United States, there are also various grades of sergeant major, but they are all of the same pay grade of E-9. However, the Sergeant Major of the Army and the Sergeant Major of the Marine Corps, as their respective service's Senior Enlisted Advisor, receive a special rate of basic pay that is higher than all other sergeants major.

Petty officer first class is the sixth enlisted rank in the U.S. Navy, U.S. Coast Guard, and the United States Naval Sea Cadet Corps, ranking just above petty officer second class and directly below chief petty officer. It is designated as non-commissioned officer, as are all petty officer ratings. It is equivalent to the rank of staff sergeant in the Army and Marine Corps, and technical sergeant in the Air Force. They are all ranked E-6, which refers to the enlisted numbering system associated with pay grades.

Mess dress uniform is the military term for the evening dress worn by commissioned officers and non-commissioned officers in their respective messes or on other more formal occasions. It is also known as mess uniform and, more informally, as mess kit. It frequently consists of a mess jacket and trousers worn with a white formal dress shirt and other formal accessories, though the exact form varies depending on the uniform regulations for each service.