Tomotherapy is a radiation therapy modality, [1] [2] [3] in which the patient is scanned across a modulated strip-beam, so that only one “slice” (Greek prefix “tomo-”) of the target is exposed at any one time by the linear accelerator (linac) beam. The three components distinctive to this modality are: (1) a collimator pair that defines the length of the strip, (2) a binary multileaf collimator whose leaves open and close during treatment to modulate the strip’s intensity, and (3) a couch that scans the patient across the beam at a fixed speed the during treatment delivery.

There are few head to head comparisons of tomotherapy and other IMRT techniques, however there is some evidence that VMAT can provide faster treatment while tomotherapy is better able to spare surrounding healthy tissue while delivering a uniform dose. [5] [6] [7]

In helical tomotherapy, the linac rotates on its gantry at a constant speed while the beam is delivered; so that from the patient’s perspective, the shape traced out by the linac is helical.

While helical tomotherapy can treat very long volumes without a need to abut fields in the longitudinal direction, it does display a distinct artifact due to "thread effect" [8] when treating non-central tumors. Thread effect can be suppressed during planning through good pitch selection.

Fixed-angle tomotherapy uses multiple tomotherapy beams, each delivered from a separate fixed gantry angle, in which only the couch moves during beam delivery. This is branded as TomoDirect, but has also been called topotherapy. [9]

The technology enables fixed beam treatments by moving the patient through the machine bore while maintaining specified beam angles.

In general, radiation therapy (or radiotherapy) has developed with a strong reliance on homogeneity of dose throughout the tumor. Tomotherapy embodies the sequential delivery of radiation to different parts of the tumor which raises two important issues. First, this method is known as "field matching" and brings with it the possibility of a less-than-perfect match between two adjacent fields with a resultant hot and/or cold spot within the tumor. The second issue is that if the patient or tumor moves during this sequential delivery, then again, a hot or cold spot will result. The first problem is reduced by use of a helical motion, as in spiral computed tomography. [13]

This risk is accentuated in younger patients with early-stage breast cancer, where cure rates are high and life expectancy is substantial. [17]

The tomotherapy technique was developed in the early 1990s at the University of Wisconsin–Madison by Professor Thomas Rockwell Mackie and Paul Reckwerdt. [21] A small megavoltage x-ray source was mounted in a similar fashion to a CT x-ray source, and the geometry provided the opportunity to provide CT images of the body in the treatment setup position. Although original plans were to include kilovoltage CT imaging, current models use megavoltage energies. With this combination, the unit was one of the first devices capable of providing modern image-guided radiation therapy (IGRT). [13]

The first implementation of tomotherapy was the Corvus system developed by Nomos Corporation, with the first patient treated in April, 1994. [22] [10] This was the first commercial system for planning and delivering intensity modulated radiation therapy (IMRT). The original system, designed solely for use in the brain, incorporated a rigid skull-based fixation system to prevent patient motion between the delivery of each slice of radiation. But some users [23] eschewed the fixation system and applied the technique to tumors in many different parts of the body.

At this time, the systems manufactured by Accuray (previously TomoTherapy Inc.) are the primary tomotherapy devices in use. 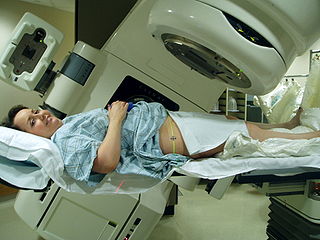 Radiation therapy or radiotherapy, often abbreviated RT, RTx, or XRT, is a therapy using ionizing radiation, generally as part of cancer treatment to control or kill malignant cells and normally delivered by a linear accelerator. Radiation therapy may be curative in a number of types of cancer if they are localized to one area of the body. It may also be used as part of adjuvant therapy, to prevent tumor recurrence after surgery to remove a primary malignant tumor. Radiation therapy is synergistic with chemotherapy, and has been used before, during, and after chemotherapy in susceptible cancers. The subspecialty of oncology concerned with radiotherapy is called radiation oncologist.

External beam radiotherapy (EBRT) is the most common form of radiotherapy. The patient sits or lies on a couch and an external source of ionizing radiation is pointed at a particular part of the body. In contrast to brachytherapy and unsealed source radiotherapy, in which the radiation source is inside the body, external beam radiotherapy directs the radiation at the tumour from outside the body. Orthovoltage ("superficial") X-rays are used for treating skin cancer and superficial structures. Megavoltage X-rays are used to treat deep-seated tumours, whereas megavoltage electron beams are typically used to treat superficial lesions extending to a depth of approximately 5 cm. X-rays and electron beams are by far the most widely used sources for external beam radiotherapy. A small number of centers operate experimental and pilot programs employing beams of heavier particles, particularly protons, owing to the rapid dropoff in absorbed dose beneath the depth of the target. 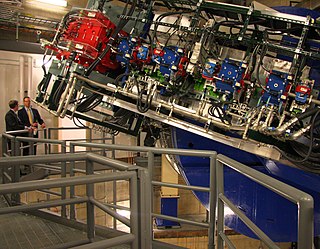 In the field of medical treatment, proton therapy, or proton radiotherapy, is a type of particle therapy that uses a beam of protons to irradiate diseased tissue, most often to treat cancer. The chief advantage of proton therapy over other types of external beam radiotherapy is that the dose of protons is deposited over a narrow range of depth, which results in minimal entry, exit, or scattered radiation dose to healthy nearby tissues. 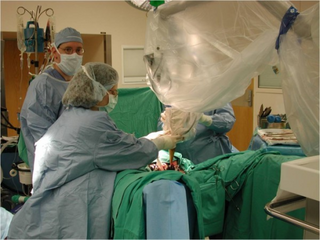 Radiosurgery is surgery using radiation, that is, the destruction of precisely selected areas of tissue using ionizing radiation rather than excision with a blade. Like other forms of radiation therapy, it is usually used to treat cancer. Radiosurgery was originally defined by the Swedish neurosurgeon Lars Leksell as "a single high dose fraction of radiation, stereotactically directed to an intracranial region of interest".

Stereotactic surgery is a minimally invasive form of surgical intervention that makes use of a three-dimensional coordinate system to locate small targets inside the body and to perform on them some action such as ablation, biopsy, lesion, injection, stimulation, implantation, radiosurgery (SRS), etc.

Fast neutron therapy utilizes high energy neutrons typically between 50 and 70 MeV to treat cancer. Most fast neutron therapy beams are produced by reactors, cyclotrons (d+Be) and linear accelerators. Neutron therapy is currently available in Germany, Russia, South Africa and the United States. In the United States, three treatment centers are operational in Seattle, Washington, Detroit, Michigan and Batavia, Illinois. The Detroit and Seattle centers use a cyclotron which produces a proton beam impinging upon a beryllium target; the Batavia center at Fermilab uses a proton linear accelerator. 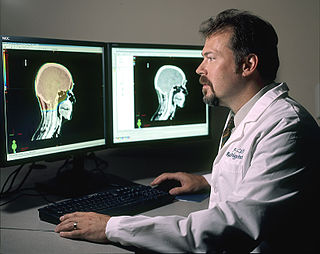 In radiotherapy, radiation treatment planning (RTP) is the process in which a team consisting of radiation oncologists, radiation therapist, medical physicists and medical dosimetrists plan the appropriate external beam radiotherapy or internal brachytherapy treatment technique for a patient with cancer.

Image-guided radiation therapy is the process of frequent two and three-dimensional imaging, during a course of radiation treatment, used to direct radiation therapy utilizing the imaging coordinates of the actual radiation treatment plan. The patient is localized in the treatment room in the same position as planned from the reference imaging dataset. An example of IGRT would include localization of a cone beam computed tomography (CBCT) dataset with the planning computed tomography (CT) dataset from planning. IGRT would also include matching planar kilovoltage (kV) radiographs or megavoltage (MV) images with digital reconstructed radiographs (DRRs) from the planning CT. These two methods comprise the bulk of IGRT strategies currently employed circa 2013.

The CyberKnife System is a radiation therapy device manufactured by Accuray Incorporated. The system is used to deliver radiosurgery for the treatment of benign tumors, malignant tumors and other medical conditions.

Intraoperative electron radiation therapy is the application of electron radiation directly to the residual tumor or tumor bed during cancer surgery. Electron beams are useful for intraoperative radiation treatment because, depending on the electron energy, the dose falls off rapidly behind the target site, therefore sparing underlying healthy tissue. IOERT has been called "precision radiotherapy," because the physician has direct visualization of the tumor and can exclude normal tissue from the field while protecting critical structures within the field and underlying the target volume. One advantage of IOERT is that it can be given at the time of surgery when microscopic residual tumor cells are most vulnerable to destruction. Also, IOERT is often used in combination with external beam radiotherapy (EBR) because it results in less integral doses and shorter treatment times.

Breast cancer management takes different approaches depending on physical and biological characteristics of the disease, as well as the age, over-all health and personal preferences of the patient. Treatment types can be classified into local therapy and systemic treatment. Local therapy is most efficacious in early stage breast cancer, while systemic therapy is generally justified in advanced and metastatic disease, or in diseases with specific phenotypes.

John Stoddard Cancer Center is a cancer care center located in Central Iowa. It was the first cancer center in that location.

Professor Minesh P Mehta, MD, FASTRO, is an American radiation oncologist and physician-scientist of Indian origin, Ugandan birth, Zambian Schooling and American Training, who contributed to the field of oncology for more than two and half decades.

Docrates Cancer Center is the first and currently the only private hospital in the Nordic countries that comprehensively specialises in cancer treatment. It operates in Helsinki, Finland. It characterises its operations as those complementing the public sector. Docrates Oy was established in 2006 and the hospital started its operations at the premises of Eira Hospital in autumn 2007. It moved to its own premises in Jätkäsaari, Helsinki, in 2009, where it has hospital rights. There is a ward and Health and Recovery Center located at Docrates Cancer Center. Among other things, diagnostics, pharmacotherapy, radiation therapy and isotopic treatments are carried out at the hospital. Cancer surgeries are performed in partner hospitals. Docrates also participates in clinical trials and the testing and development of new treatments.

Gel dosimeters are manufactured from radiation sensitive chemicals that, upon irradiation with ionising radiation, undergo a fundamental change in their properties as a function of the absorbed radiation dose. 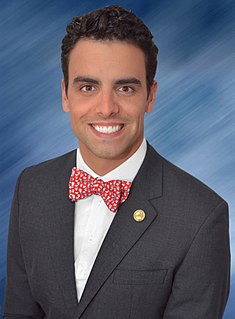