Last updated December 18, 2020
Method of mitigating the detrimental effects of a channel with limited dynamic range

In telecommunication and signal processing, companding (occasionally called compansion) is a method of mitigating the detrimental effects of a channel with limited dynamic range. The name is a portmanteau of the words compressing and expanding, which are the functions of a compander at the transmitting and receiving end respectively. The use of companding allows signals with a large dynamic range to be transmitted over facilities that have a smaller dynamic range capability. Companding is employed in telephony and other audio applications such as professional wireless microphones and analog recording.

The dynamic range of a signal is compressed before transmission and is expanded to the original value at the receiver. The electronic circuit that does this is called a compander and works by compressing or expanding the dynamic range of an analog electronic signal such as sound recorded by a microphone. One variety is a triplet of amplifiers: a logarithmic amplifier, followed by a variable-gain linear amplifier and an exponential amplifier. Such a triplet has the property that its output voltage is proportional to the input voltage raised to an adjustable power.

In practice, companders are designed to operate according to relatively simple dynamic range compressor functions that are designed to be suitable for implementation using simple analog electronic circuits. The two most popular compander functions used for telecommunications are the A-law and μ-law functions.

Companding is used in digital telephony systems, compressing before input to an analog-to-digital converter, and then expanding after a digital-to-analog converter. This is equivalent to using a non-linear ADC as in a T-carrier telephone system that implements A-law or μ-law companding. This method is also used in digital file formats for better signal-to-noise ratio (SNR) at lower bit depths. For example, a linearly encoded 16-bit PCM signal can be converted to an 8-bit WAV or AU file while maintaining a decent SNR by compressing before the transition to 8-bit and expanding after conversion back to 16-bit. This is effectively a form of lossy audio data compression.

Companders are used in concert audio systems and in some noise reduction schemes.

In 1942, Clark and his team completed the SIGSALY secure voice transmission system that included the first use of companding in a PCM (digital) system. [5]

In 1953, B. Smith showed that a nonlinear DAC could be complemented by the inverse nonlinearity in a successive-approximation ADC configuration, simplifying the design of digital companding systems. [6]

In 1970, H. Kaneko developed the uniform description of segment (piecewise linear) companding laws that had by then been adopted in digital telephony. [7]

In the 1980s (and '90s), many of the music equipment manufacturers (Roland, Yamaha, Korg) used companding when compressing the library waveform data in their digital synthesizers. Unfortunately exact algorithms are not known, neither if any of the manufacturers ever used the Companding scheme which is described in this article. The only known thing is that manufacturers did use data compression [8] in the mentioned time period and that some people refer to it as "companding" while in reality it might mean something else, for example data compression and expansion. [9] This dates back to the late '80s when memory chips were often one of the most costly components in the instrument. Manufacturers usually quoted the amount of memory in its compressed form: i.e. 24 MB of physical waveform ROM in a Korg Trinity is actually 48 MB when uncompressed. Similarly, Roland SR-JV expansion boards were usually advertised as 8 MB boards with '16 MB-equivalent content'. Careless copying of this technical information, omitting the "equivalence" reference, can often cause confusion.

Modulation is used by singers and other vocalists to modify characteristics of their voices, such as loudness or pitch.

An A-law algorithm is a standard companding algorithm, used in European 8-bit PCM digital communications systems to optimize, i.e. modify, the dynamic range of an analog signal for digitizing. It is one of two versions of the G.711 standard from ITU-T, the other version being the similar μ-law, used in North America and Japan.

A delta modulation is an analog-to-digital and digital-to-analog signal conversion technique used for transmission of voice information where quality is not of primary importance. DM is the simplest form of differential pulse-code modulation (DPCM) where the difference between successive samples are encoded into n-bit data streams. In delta modulation, the transmitted data are reduced to a 1-bit data stream. Its main features are: 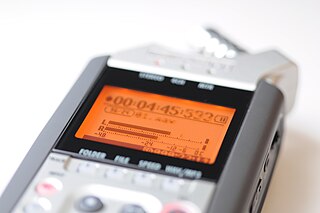 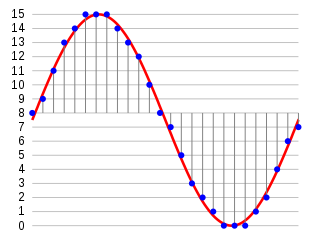 G.711 is a narrowband audio codec originally designed for use in telephony that provides toll-quality audio at 64 kbit/s. G.711 passes audio signals in the range of 300–3400 Hz and samples them at the rate of 8,000 samples per second, with the tolerance on that rate of 50 parts per million (ppm). Non-uniform (logarithmic) quantization with 8 bits is used to represent each sample, resulting in a 64 kbit/s bit rate. There are two slightly different versions: μ-law, which is used primarily in North America and Japan, and A-law, which is in use in most other countries outside North America.

Sound quality is typically an assessment of the accuracy, fidelity, or intelligibility of audio output from an electronic device. Quality can be measured objectively, such as when tools are used to gauge the accuracy with which the device reproduces an original sound; or it can be measured subjectively, such as when human listeners respond to the sound or gauge its perceived similarity to another sound.

dbx is a family of noise reduction systems developed by the company of the same name. The most common implementations are dbx Type I and dbx Type II for analog tape recording and, less commonly, vinyl LPs. A separate implementation, known as dbx-TV, is part of the MTS system used to provide stereo sound to North American and certain other TV systems. The company, dbx, Inc., was also involved with Dynamic Noise Reduction (DNR) systems. 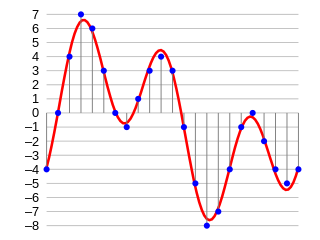