Development of the administrative divisions of Ukraine

During the existence of the Ukrainian People's Republic and the Soviet Ukraine its administration division went through three changes.

In 1919, the northern Mhlyn, Novozybkiv, Starodub, and Surazh counties of Chernihiv Governorate, with their mixed Ukrainian–Belarusian–Russian population, were transferred from Ukraine to the newly established Gomel Governorate of the Russian republic. [1] In February 1924, Tahanrih and Shakhtinsky counties (okruhas) were transferred from the Donetsk guberniya of the Ukrainian SSR to the North Caucasus krai of the Russian SFSR. [2] [3]

Just before World War II, Hungary with the help from Poland occupied Carpatho-Ukraine that was to secede from the falling apart Czechoslovakia after the Munich agreement plus some additional territories of Slovakia. Poland in turn also occupied some territories of Silesia.

In the fall of 1938, the southwestern territories of Subcarpathian Rus including the cities of Uzhhorod, Berehove, and Mukacheve were yielded to the Kingdom of Hungary.

In 1939, Carpatho-Ukraine was overrun by the Kingdom of Hungary.

Some of the newly acquired territories in 1939 were annexed and incorporated as Kárpátalja. Kárpátalja unlike most of the country, however, had a special administrative system with the intention of it being governed by the Ruthenian minority population. In practice, it was not the case. Kárpátalja was divided into three administrative delegations (közigazgatási kirendeltség) which were each divided into four districts (járás). The previously annexed territories of 1938 were divided into Bereg County and Ung County.

In 1939 and 1940, the Soviet Union launched an offensive into eastern Poland and eastern Romania. During these operations, the territories of Volhynia, Halychyna, Bukovina, and Budjak were added to the Ukrainian SSR. In the territories of Volhynia and Halychyna, six oblasts were created in 1939: Lviv Oblast, Drohobych Oblast, Stanislav Oblast, Ternopil Oblast, Volyn Oblast, and Rivne Oblast. In 1940, Bukovina was organized as Chernivtsi Oblast and Budjak as Izmail Oblast.

After the German invasion of 1941, Ukraine was split between three countries, Germany, Romania, and Hungary. Within Germany Ukraine also was divided between the General Government (Krakau), Reichskommisariat (centered in Rivne), and Wehrmacht administration closer to the Eastern Front.

Western Ukraine around Lviv was part of the General Government as Distrikt Galizien which was added to four other existing districts with the invasion of the Soviet Union. Distrikt Galizien consisted of 13 land-kreis and one stadtkreis (Lemberg). Some other territories that had been incorporated into the Ukrainian SSR in 1939 were passed to other Distrikts, mostly Krakau.

Each Generalbezirke consisted of several Kreisgebiete which in turn were divided into selsoviets. Krim, however, did not in reality encompass territory of the Crimean peninsula which was under a special jurisdiction of Wehrmacht. Territories of Ukraine (Donets basin and Sloboda Ukraine) also stayed under the Wehrmacht jurisdiction due to a close proximity to front-lines. It was planned to extend the territory of such Ukraine all the way to Volga river adding some other General-bezirke.

Romania liberated the south-western part of Ukrainian Soviet Socialist Republic from the foreign rule, more specifically the area which today constitutes Odessa Oblast eastward of the Dniester and southern Vinnytsia Oblast, land inhabited mostly by Romanians a few centuries ago. Those territories were organized into the province of Transnistria. Romania also recovered Budjak (Izmail Oblast) and Northern Bukovina (Chernivtsi Oblast), territories with Romanian ethnic majority, which Romania lost in the beginning of World War II.

Between 1944 and 1951 the border between Ukrainian SSR and Polish People's Republic changed a lot. There were at least five territorial transfers.

A new Kherson Oblast was created during the war on March 30, 1944, out of the territories of Mykolaiv Oblast and Zaporizhia Oblast.

Beside a Ukrainian-Polish border exchange on January 22, 1946, the Zakarpattia Oblast was also created out of newly acquired Czechoslovakia territories, where Carpatho-Ukraine had been proclaimed just before World War II.

Big changes in the administrative division in Ukraine took place in winter of 1954.

The new Cherkasy Oblast was created on January 7, mostly out of the southern raions of Kyiv Oblast, and some raions of Poltava and Kirovohrad Oblasts.

On February 15 Izmail Oblast was merged into Odessa Oblast. Several raions of the previous Odessa Oblast were transferred to the neighboring Kirovohrad and Mykolaiv Oblasts.

The Crimean Oblast was transferred from Russia to Ukraine on February 19.

Before the fall of Soviet Union in 1992 the Ukrainian SSR consisted of 25 oblasts and two cities of republican subordination, Kyiv and Sevastopol.

May 21, 1959, Drohobych Oblast was merged into Lviv Oblast

1965 Talalaiv Raion was transferred from Sumy Oblast to Chernihiv Oblast

1986 Chornobyl Raion and the city municipality of Prypiat were liquidated and merged with the Ivankiv Raion, Kyiv Oblast.

In 1988 the new city of Slavutych was established for victims of the Chornobyl catastrophe, in Chernihiv Oblast. The city was subordinated to the Kyiv Oblast.

On February 12, 1991, the Crimean oblast was restored to its pre-WWII status of autonomous Soviet socialist republic following a referendum. After its declaration of independence in August 1991, and the dissolution of the Soviet Union in December, Ukraine grandfathered the whole Soviet system of administrative divisions. Cities of republic significance were transformed into cities with special status.

After the start of the war in Donbas in the oblasts of Donetsk and Luhansk in April 2014, Ukrainian government forces fought to hold territory against separatist militias with a significant level of Russian manpower and military support. After a period of intense warfare involving Russian regular forces in 2014 and 2015, a ceasefire was declared and a relatively stable line of contact was established, although the semi-frozen conflict has continued to cost thousands of lives along the so-called grey zone that surrounds the line of contact. About a third of the area of the two Donbas oblasts remain under the de facto control of Russian-supported self-proclaimed Donetsk and Luhansk people's republics. In these cities and raions where the respective local governments cannot exercise their constitutional powers, Ukraine created civil–military administrations in February 2015. [4]

In 2015 a new type of administrative unit was created, the amalgamated hromada. This means that settlement councils, rural councils, and cities of district significance can create new administrative units. [5] The amalgamated hromada was created to help the financial and administrate power and independence of rural Ukraine. [5] According to draft constitutional changes submitted to the Verkhovna Rada (Ukraine's parliament) by President Volodymyr Zelensky in December 2019, the hromadas should replace the raions of Ukraine. [6] 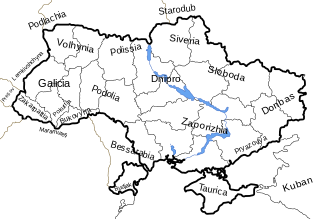 Budjak or Budzhak, historically known as Bessarabia until 1812, is a historical region in Ukraine and Moldova. Lying along the Black Sea between the Danube and Dniester rivers, this sparsely populated multi-ethnic 600,000-people region of 13,188 km2 is located in the southern part of historical Bessarabia. Nowadays, the larger part of the region is included in Ukraine's Odessa Oblast, while the rest is included in the southern districts of Moldova. The region is bordered to the north by the rest of Moldova, to the west and south by Romania, and to the east by the Black Sea and the rest of Ukraine. 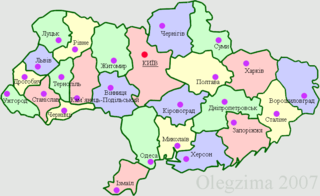 The Border Agreement between Poland and the USSR of 16 August 1945 established the borders between the Union of Soviet Socialist Republics (USSR) and the Republic of Poland. It was signed by the Provisional Government of National Unity formed by the Polish communists. According to the treaty, Poland officially accepted the ceding its pre-war Eastern territory to the USSR (Kresy) which was decided earlier in Yalta already. Some of the territory along the Curzon line, established by Stalin during the course of the war, was returned to Poland. The treaty also recognised the division of the former German East Prussia and ultimately approved the finalised delimitation line between the Soviet Union and Poland: from the Baltic sea, to the border tripoint with Czechoslovakia in the Carpathians. The agreement entered into force on 5 February 1946. 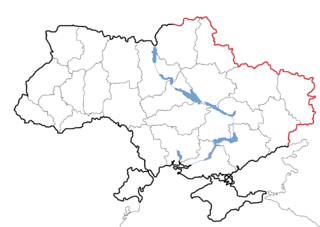 The 1991 season was the 61st season of competitive football in Ukraine which was part of the bigger Soviet Union.