The European green woodpecker spends much of its time feeding on ants on the ground and does not often 'drum' on trees like other woodpecker species. Though its vivid green and red plumage is particularly striking, it is a shy bird, and is more often heard than seen, drawing attention with its loud calls. A nest hole is excavated in a tree; four to six eggs are laid which hatch after 19–20 days.

The European green woodpecker was formally described by the Swedish naturalist Carl Linnaeus in 1758 in the tenth edition of his Systema Naturae under its current binomial name Picus viridis. [3] The type locality is Sweden. [4] The scientific name is derived from the Latin picus, meaning "woodpecker", and viridis meaning "green". [5] It is member of the order Piciformes and the woodpecker family Picidae. [6]

There are three subspecies, [6] with subtle and mostly clinal differences between them. [7]

The European green woodpecker measures 30–36 cm (12–14 in) in length with a 45–51 cm (18–20 in) wingspan. Both sexes are green above and pale yellowish green below, with yellow rump and red crown and nape; the moustachial stripe has a red centre in the male but is solid black in the female. The lores and around the white eye are black in both male and female, except in the Iberian race P. v. subsp. sharpei, in which it is dark grey and males have only a lower black border to the moustache. Juveniles are spotty and streaked all over; [10] the moustache is dark initially, though juvenile males can show some red feathers by early June or usually by July or August. [7]

Moult takes place between June and November with the first flight feathers being lost around the time the young fledge. Juveniles moult quickly after fledging and gain their adult plumage between August and November. [11]

Although the European green woodpecker is shy and wary, it is usually its loud calls, known as yaffling, which first draw attention. It 'drums' rarely (a soft, fast roll), but often gives a noisy kyü-kyü-kyück while flying. The song is a loud series of 10–18 'klü' sounds which gets slightly faster towards the end and falls slightly in pitch. [10] The female makes a thinner pü-pü-pü-pü-pü-pü-pü. [12] The flight is undulating, with 3–4 wingbeats followed by a short glide when the wings are held by the body. [13]

It can be distinguished from the similar, but smaller, grey-headed woodpecker by its yellowish, not grey, underparts, and the black lores and facial 'mask'. [7] In Europe, its green upperparts and yellow rump can lead to confusion with the grey-headed woodpecker or possibly the female golden oriole, though the latter is smaller and more slender with narrower wings and longer tail. The closely related, [13] very similar Levaillant's woodpecker occurs only in north-west Africa. [10]

More than 75% of the range of the European green woodpecker is in Europe, where it is absent from some northern and eastern parts and from Ireland, Greenland and the Macaronesian Islands, but otherwise distributed widely. Over half of the European population is thought to be in France and Germany, with substantial numbers also in United Kingdom, Sweden, Russia, Croatia, Romania and Bulgaria. [14] It also occurs in western Asia. [13]

The European green woodpecker has a large range and an Estimated Global Extent of Occurrence of between 1 million to 10 million square kilometres, and a population in the region of 920,000 to 2.9 million birds. Populations appear to be stable, so the species is considered of Least Concern. [15] The species is highly sedentary [12] and individuals rarely move more than around 500 m between breeding seasons. [13]

A combination of old deciduous trees for nesting, and nearby feeding grounds with plenty of ants, is essential. This is usually found in semi-open landscapes with small woodlands, hedges, scattered old trees, edges of forests and floodplain forests. Suitable habitats for foraging include grassland, heaths, plantations, orchards and lawns. [15]

The nesting hole is larger but similar to those of the other woodpeckers. It may be a few feet above the ground or at the top of a tall tree; oaks, beeches, willows and fruit trees are the preferred nest trees in western and central Europe, and aspens in the north. [14] The hole may be excavated in sound or rotten wood, with an entrance hole of 60 mm × 75 mm (2.4 in × 3.0 in). The cavity inside may be 150 mm wide and up to 40 cm (16 in) deep [16] and the work is performed mostly by the male over 15–30 days. Some tree holes are used for breeding for more than 10 years, but not necessarily by the same pair. [13]

The main food of the European green woodpecker is ants of the genera Lasius and Formica [15] for which it spends much of its time foraging on the ground, [10] though other insects and small reptiles are also taken occasionally. [13] The bird's distinctive, elongated, cylindrical droppings often consist entirely of ant remains. [16] At ant nests, it probes into the ground and licks up adult ants and their larvae. [13] They have tongues that wrap to the back of their head. [18] Green woodpeckers will often forage in short grazed or mown permanent grasslands where the availability of ant nests is high. [19]

The beak is relatively weak and used for pecking in soft wood only. [13] In common with other woodpecker species, [20] the green woodpecker's tongue is long (10 cm) and has to be curled around its skull. [17] It lacks the barbs of the Dendrocopos woodpeckers and black woodpecker (Dryocopus martius), [13] but is made sticky by secretions from the enlarged salivary glands. [13] Heavy, prolonged snow cover makes feeding difficult for the green woodpecker and can result in high mortality, from which it may take 10 years for the population to recover. [15] Ant nests can be located under the snow; one bird was observed to dig 85 cm to reach a nest. [13]

'Professor Yaffle', the wooden bookend character in the 1974 children's animation series Bagpuss , [21] was based loosely upon the green woodpecker. [22] 'Yaffle' was among many English folk names for the European green woodpecker relating to its laughing call; others include laughing Betsey, yaffingale, yappingale and Jack Eikle. Other names, including rain-bird, weather cock and wet bird, suggest its supposed ability to bring on rain. [23] [24] The species has been the subject of postage stamps from several countries. [25] The European green woodpecker is associated with Woodpecker Cider, an image of the bird is used on the merchandise. [26] The woodpecker was the totem of the Italic tribe of the Picentes, [27] and features of the coat of arms and flag of the Italian region of the Marches. [28]

The great spotted woodpecker is a medium-sized woodpecker with pied black and white plumage and a red patch on the lower belly. Males and young birds also have red markings on the neck or head. This species is found across the Palearctic including parts of North Africa. Across most of its range it is resident, but in the north some will migrate if the conifer cone crop fails. Some individuals have a tendency to wander, leading to the recent recolonisation of Ireland and to vagrancy to North America. Great spotted woodpeckers chisel into trees to find food or excavate nest holes, and also drum for contact and territorial advertisement; like other woodpeckers, they have anatomical adaptations to manage the physical stresses from the hammering action. This species is similar to the Syrian woodpecker.

The lesser spotted woodpecker is a member of the woodpecker family Picidae. It was formerly assigned to the genus Dendrocopos. Some taxonomic authorities continue to list the species there.

Woodpeckers are part of the bird family Picidae, which also includes the piculets, wrynecks, and sapsuckers. Members of this family are found worldwide, except for Australia, New Guinea, New Zealand, Madagascar, and the extreme polar regions. Most species live in forests or woodland habitats, although a few species are known that live in treeless areas, such as rocky hillsides and deserts, and the Gila woodpecker specialises in exploiting cacti. 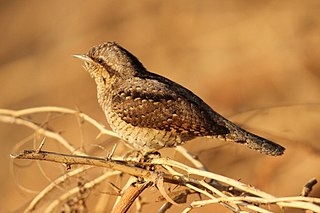 The Eurasian wryneck or northern wryneck is a species of wryneck in the woodpecker family. This species mainly breeds in temperate regions of Europe and Asia. Most populations are migratory, wintering in tropical Africa and in southern Asia from Iran to the Indian subcontinent, but some are resident in northwestern Africa. It is a bird of open countryside, woodland and orchards. 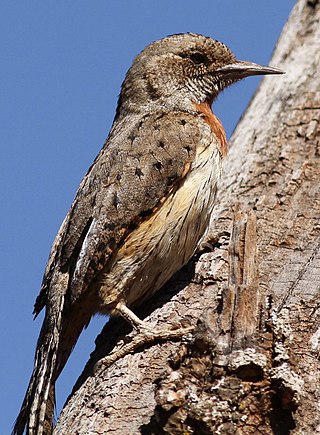 The red-throated wryneck, also known as the rufous-necked wryneck or red-breasted wryneck, is a species of wryneck in the woodpecker family closely related to the Eurasian wryneck. Its three subspecies are resident in much of sub-Saharan Africa in open habitats with some trees.

The pileated woodpecker is a large, mostly black woodpecker native to North America. An insectivore, it inhabits deciduous forests in eastern North America, the Great Lakes, the boreal forests of Canada, and parts of the Pacific Coast. It is the largest confirmed extant woodpecker species in North America, with the possible exception of the ivory-billed woodpecker, which the U.S. Fish and Wildlife Service has proposed be reclassified as extinct. It is also the third largest species of woodpecker in the world, after the great slaty woodpecker and the black woodpecker. "Pileated" refers to the bird's prominent red crest, from the Latin pileatus meaning "capped". 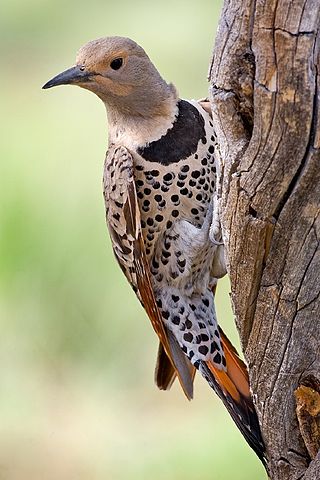 The northern flicker or common flicker is a medium-sized bird of the woodpecker family. It is native to most of North America, parts of Central America, Cuba, and the Cayman Islands, and is one of the few woodpecker species that migrate. Over 100 common names for the northern flicker are known, including yellowhammer, clape, gaffer woodpecker, harry-wicket, heigh-ho, wake-up, walk-up, wick-up, yarrup, and gawker bird. Many of these names derive from attempts to imitate some of its calls. It is the state bird of Alabama

The hairy woodpecker is a medium-sized woodpecker that is found over a large area of North America. It is approximately 250 mm (9.8 in) in length with a 380 mm (15 in) wingspan. With an estimated population in 2020 of almost nine million individuals, the hairy woodpecker is listed by the IUCN as a species of least concern. Some nomenclature authorities, such as the eBird/Clements checklist, place this species in the genus Dryobates.

The middle spotted woodpecker is a European woodpecker belonging to the genus Dendrocoptes. 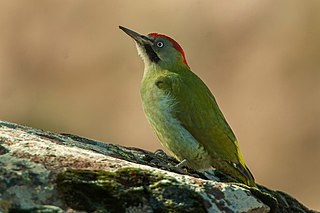 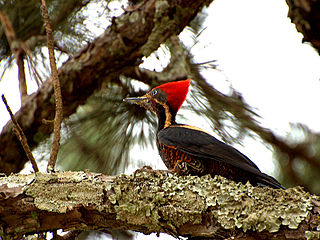 The lineated woodpecker is a very large woodpecker which is a resident breeding bird from southern Mexico to northern Argentina and on Trinidad in the Caribbean.

Picus is a genus of birds in the woodpecker family. It has representatives in Europe, Asia and North Africa. The genus name is Latin for "woodpecker". The genus Picus was erected by the Swedish naturalist Carl Linnaeus in 1758 in the tenth edition of his Systema Naturae.

The great slaty woodpecker is a species of bird in the family Picidae. It is found across the Indian Subcontinent and Southeast Asia. A unique and basically unmistakable bird, it is the largest species of woodpecker that is certain to exist today. It is a fairly gregarious species.

The black-headed woodpecker is a species of bird in the family Picidae. It typically inhabits deciduous and coniferous forests and is found in Cambodia, Laos, Myanmar, Thailand, and Vietnam.

Celeus is a genus of bird in the woodpecker family, Picidae, found in tropical and subtropical forests and woodlands of Central and South America. The genus contains 13 extant species. One, Kaempfer's woodpecker, was believed to be extinct until a specimen was caught in 2006.

There are four species of bird named green woodpecker: