Yamaguchi was born on July 12, 1971, [4] in Hayward, California, [5] to Jim Yamaguchi, a dentist, and Carole (née Doi), a medical secretary. Yamaguchi is Sansei (a third-generation descendant of Japanese emigrants). [6] Her paternal grandparents and maternal great-grandparents emigrated to the United States from Japan, originating from Wakayama Prefecture and Saga Prefecture. [7] [8] Yamaguchi's grandparents were sent to an internment camp during World War II, where her mother was born. Her maternal grandfather, George A. Doi, was in the U.S. Army and fought in Germany and France during World War II during the time his family was interned at the Heart Mountain and Amache camps. [9] Research done in 2010 by Harvard Professor Henry Louis Gates, Jr. for the PBS series Faces of America showed that Yamaguchi's heritage can be traced back to Wakayama and Saga prefectures in Japan and that her paternal grandfather, Tatsuichi Yamaguchi, emigrated to Hawaii in 1899. [10]

Yamaguchi and her siblings, Brett and Lori, grew up in Fremont, California. In order to accommodate her training schedule, Yamaguchi was home-schooled for her first two years of high school, but attended Mission San Jose High School for her junior and senior years, where she graduated. [11]

Yamaguchi began skating and taking ballet lessons, as a child, as physical therapy for her club feet. [12]

As a pairs team, Yamaguchi and Galindo were unusual in that they were both accomplished singles skaters, which allowed them to consistently perform difficult elements like side by side triple flip jumps, which are still more difficult than side by side jumps performed by current top international pairs teams. They also jumped and spun in opposite directions, Yamaguchi counter-clockwise, and Galindo clockwise, which gave them an unusual look on the ice. In 1990, Yamaguchi decided to focus solely on singles. Galindo went on to have a successful singles career as well, winning the 1996 U.S. championships and the 1996 World bronze medal.

In 1991, Yamaguchi moved to Edmonton, Alberta, to train with coach Christy Ness. There, she took psychology courses at the University of Alberta. [13] The same year Yamaguchi placed second to Tonya Harding at the U.S. championships, her third consecutive silver medal at Nationals. The following month in Munich, Germany, Yamaguchi won the 1991 World Championships. That year, the American ladies team, consisting of Yamaguchi, Harding and Nancy Kerrigan, became the only national ladies team to have its members sweep the Worlds podium. In 1992, Yamaguchi won her first U.S. title and gained a spot to the 1992 Winter Olympics in Albertville, France. Joining her on the U.S. team were again Kerrigan and Harding. While competitors Harding and Japan’s Midori Ito were consistently landing the difficult triple axel jump in competition, Yamaguchi instead focused on her artistry and her triple-triple combinations in hopes of becoming a more well-rounded skater. Both Harding and Ito fell on their triple axels at the Olympics (though Ito successfully landed the jump later on in her long program after missing the first time), allowing Yamaguchi to win the gold, despite errors in her free program, including putting a hand to the ice on a triple loop and a double salchow instead of a planned triple. She later explained her mindset during the long program: “You just do your best and forget the rest." Yamaguchi went on to successfully defend her World title that same year.

Yamaguchi turned professional after the 1991–92 competitive season. [14] She toured for many years with Stars on Ice and also participated in the pro competition circuit.[ citation needed ]

In 1996, Yamaguchi established the Always Dream Foundation for children. The goal of the foundation is to provide funding for after school programs, computers, back-to-school clothes for underprivileged children, and summer camps for kids with disabilities. Commenting in 2009, she explained her inspiration for the project: "I was inspired by the Make-A-Wish foundation to make a positive difference in children’s lives. We’ve been helping out various children’s organizations, which is rewarding. Our latest project is a playground designed so that kids of all abilities can play side by side. That’s our focus now." [15]

Currently her Always Dream Foundation is focused on early childhood literacy with a statement of "Empowering Children to reach their dreams through education and inspiration." ADF has partnered with "Raising a Reader" to launch a reading program in schools throughout California and eventually nationwide. The foundation is also providing a language arts program "Footsteps to Brilliance" to kindergarten and first grade. Both programs integrate innovative technology into the classrooms. [16]

Yamaguchi is the author of Always Dream, Pure Gold, and Figure Skating for Dummies . In 2011, she published an award-winning children's book, Dream Big, Little Pig, [17] which was #2 on the New York Times bestseller list, and received the Gelett Burgess Children's Book Award; a portion of the proceeds went to the Always Dream Foundation to support early childhood literacy programs. [18] A sequel, It's a Big World Little Pig, [19] was scheduled to be published March 6, 2012. [20]

Yamaguchi made a fitness video with the California Raisins in 1993 called "Hip to be Fit: The California Raisins and Kristi Yamaguchi". She has appeared as herself on Everybody Loves Raymond and in D2: The Mighty Ducks , Frosted Pink, and the Disney Channel original movie Go Figure . Yamaguchi has also performed in numerous television skating specials, including the Disney special Aladdin on Ice, in which she played Princess Jasmine.

In 2006 Yamaguchi was the host of WE tv series Skating's Next Star , created and produced by Major League Figure Skating. Yamaguchi was a local commentator on figure skating for San Jose TV station KNTV (NBC 11) during the 2006 Winter Olympics. [21]

On May 20, 2008, Yamaguchi became the champion [22] of the sixth season of ABC's reality program Dancing with the Stars , in which she was paired with Mark Ballas, defeating finalist couple Jason Taylor and Edyta Śliwińska. Yamaguchi made a special appearance in the finale of the sixteenth season where she danced alongside Dorothy Hamill.

Yamaguchi received the Inspiration Award at the 2008 Asian Excellence Awards. Two days after her Dancing with the Stars champion crowning, she received the 2008 Sonja Henie Award from the Professional Skaters Association. Among her other awards are the Thurman Munson Award, Women's Sports Foundation Flo Hyman Award,the Heisman Humanitarian Award, [23] and the Great Sports Legends Award. She is also a member of the U.S. Olympic Committee Olympic Hall of Fame, World Skating Hall of Fame, and the US Figure Skating Hall of Fame. [24] [25]

In 2010, Yamaguchi worked as a daily NBC Olympics skating broadcast analyst on NBC's Universal Sports Network. During the 2010 Winter Olympics, Kristi was also a special correspondent for the Today Show. [16]

In early 2012, Yamaguchi created a woman's active wear line focused on function, comfort, and style to empower women to look good and feel good. The lifestyle brand is called Tsu.ya by Kristi Yamaguchi. Tsu.ya donates a portion of its proceeds to support early childhood literacy through Yamaguchi's Always Dream Foundation. [26]

In November 2017, Yamaguchi returned to Dancing With the Stars' 25th season in Week eight, [27] to participate in a trio Jazz with Lindsey Stirling and her professional partner Mark Ballas. [28]

On July 8, 2000, she married Bret Hedican, a professional hockey player she met at the 1992 Winter Olympics when he played for Team USA. After their wedding, Yamaguchi and Hedican resided in Raleigh, North Carolina where Hedican played for the Carolina Hurricanes NHL team and won his only Stanley Cup in 2006. He played for one year with the Anaheim Ducks and they now live in Alamo, California [29] in Northern California with their two daughters, Keara Kiyomi (born 2003) and Emma Yoshiko (born 2005). [30] In 2011, she authored a children's book, Dream Big, Little Pig!, with illustrator Tim Bowers. [31]

Sarah Elizabeth Hughes is a former American competitive figure skater. She is the 2002 Olympic Champion and the 2001 World bronze medalist in ladies' singles. 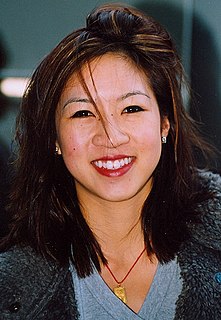 Michelle Wingshan Kwan is a retired American figure skater. She is a two-time Olympic medalist, a five-time World champion and a nine-time U.S. champion. She is tied with Maribel Vinson for the all-time National Championship record.

Tara Kristen Lipinski is an American former competitive figure skater, actor, and sports commentator. A former competitor in ladies' singles, she is the 1998 Olympic champion, the 1997 World champion, a two-time Champions Series Final champion (1997–1998), and the 1997 U.S. national champion. She was until 2019, the youngest skater to win a U.S. Nationals. She was also the youngest skater to win a World Figure Skating title and the youngest to win an Olympic gold medal. She is the first woman to complete a triple loop-triple loop combination, her signature jump, in competition.

Midori Ito or Midori Itō is a Japanese former figure skater. She is the 1989 World champion and the 1992 Olympic silver medalist. She is the first woman to land a triple-triple jump combination and a triple Axel in competition. At the 1988 Calgary Olympics, she became the first woman to land seven triple jumps in an Olympic free skating competition. 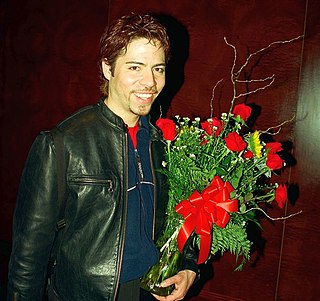 Val Joe "Rudy" Galindo is an American figure skater who competed in both single skating and pair skating. As a single skater, he is the 1996 U.S. national champion, 1987 World Junior Champion, and 1996 World Bronze medalist. As a pairs skater, he competed with Kristi Yamaguchi and was the 1988 World Junior Champion and the 1989 and 1990 U.S. National Champion. He is the first openly gay skating champion in the United States, though US, World and Olympic champion Brian Boitano came out long after his career was over. 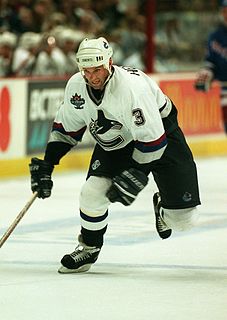 Bret Michael Hedican is an American former professional ice hockey player, a Stanley Cup champion, and a two-time US Olympian.

Tonia Kwiatkowski is an American figure skater and coach. She is a two-time Winter Universiade champion, a winner of two silver medals on the Champions Series, and the 1996 U.S. national silver medalist. She finished in the top ten at two World Championships and competed in 13 U.S. Championships. Carol Heiss Jenkins and Glyn Watts were her longtime coaches. Kwiatkowski retired from amateur skating in 1998 and continues to be involved in the sport as a skater and coach.

Jill Ann Trenary is an American figure skater. She is the 1990 World champion and a three-time U.S. national champion. She was inducted to the United States Figure Skating Hall of Fame in 2002.

Mirai Aileen Nagasu is an American figure skater. She is a three-time Four Continents medalist, the 2007 JGP Final champion, a two-time World Junior medalist, and a seven-time U.S. national medalist.

Alexandria "Zsa Zsa" Riordan-Niechcielska is an American figure skater. She most recently competed internationally on the Junior National level for Poland and won first place to get the Gold Medal. She is of Polish and Irish descent.

Chen Lu is a Chinese figure skater. She is the 1994 and 1998 Olympic bronze medalist and the 1995 World Champion. Chen won the first ever Olympic medal in figure skating for China.

Karen Chen is an American figure skater. She is a two-time CS U.S. Classic bronze medalist, the 2015 CS Golden Spin of Zagreb bronze medalist, and the 2017 U.S. national champion. Earlier in her career, she won four medals on the ISU Junior Grand Prix series, including gold at the 2013 JGP Slovakia.