This is a list of video game franchises by Sega or a subsidiary of the company. All series spanning multiple games are listed here. Games that were developed and published by third parties but released on Sega consoles are not listed here. Almost all of these titles and series have been published by Sega with the exception of a couple of franchises in which Sega was the developer. In the case of a franchise in which there are multiple games but no series article exists, the first game in the series is the main article and is linked to this list.

Among the franchises listed here are franchises now owned by 2K Sports, as those franchises were originally published by Sega until Sega sold the rights to the franchises in 2005. [1] In the case of these games, the latest release date given for the franchise shall be that of the last game in which Sega was involved in its publishing.

Also included in the franchise list is Total War . While this series did not begin with Sega as either a developer or a publisher, Sega did publish later games in the series. In 2016, Sega acquired the intellectual properties of Technosoft. 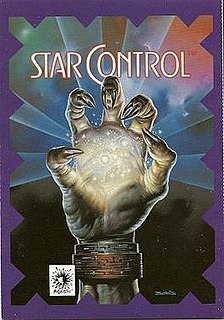 Star Control: Famous Battles of the Ur-Quan Conflict, Volume IV or just simply Star Control is a science fiction video game developed by Toys for Bob and published by Accolade in 1990. It was originally released for Amiga and MS-DOS in 1990, followed by ports for the Sega Mega Drive/Genesis, Amstrad CPC, Commodore 64 and ZX Spectrum in 1991. A sequel, Star Control II was released in 1992.

In the history of computer and video games, the third generation began on July 15, 1983, with the Japanese release of two systems: the Nintendo Family Computer and the Sega SG-1000. When the Famicom was released outside of Japan it was remodelled and marketed as the Nintendo Entertainment System (NES). This generation marked the end of the North American video game crash, and a shift in the dominance of home video game manufacturers from the United States to Japan. Handheld consoles were not a major part of this generation, although the Game & Watch line from Nintendo had started in 1980 and the Milton Bradley Microvision came out in 1979 though both are considered second generation hardware.

Rebellion Developments Limited is a British video game developer based in Oxford, England. Founded by Jason and Chris Kingsley in December 1992, the company is best known for its Sniper Elite series and multiple games in the Alien vs. Predator series. Rebellion has published comic books since 2000, when it purchased 2000 AD, the publisher of characters such as Judge Dredd and Rogue Trooper.

The Creative Assembly Limited is a British video game developer based in Horsham, founded in November 1987 by Tim Ansell. In its early years, the company worked on porting games to MS-DOS from Amiga and ZX Spectrum platforms, later working with Electronic Arts to produce a variety of games under the EA Sports brand. In 1999, the company had sufficient resources to attempt a new and original project, proceeding to develop the strategy computer game Shogun: Total War which was a critical and commercial hit, and is regarded as a benchmark strategy game. Subsequent titles in the Total War series built on the success of Shogun: Total War, increasing the company's critical and commercial success.

ToeJam & Earl is an action game developed by Johnson Voorsanger Productions and published by Sega for the Sega Megadrive (Genesis) console. Released in 1991, it centers on ToeJam and Earl—alien rappers who have crash-landed on Earth. As they attempt to escape the planet, players assume the role of either character and collect pieces of their wrecked spacecraft. ToeJam & Earl's design was heavily influenced by the role-playing video game Rogue, and took from it such features as the random generation of levels and items. It references and parodies 1980s and early 90s urban culture and is set to a funk soundtrack.

Entertainment Software Publishing, Inc. (ESP) was a Japanese video game publisher headquartered in Shibuya, Tokyo. It was founded in 1997 as the publishing arm of the Game Developers Network (GD-NET). GD-NET, which included companies such as Treasure and Game Arts, was established due to concerns over smaller developers not having the same financial backing like larger game companies did, as production of console games was beginning to rise. ESP was best known for publishing shoot 'em ups and role-playing games. While primarily a publisher, ESP also developed a handful of games internally.

The 2000s was the fourth decade in the industry's history. It was a decade that was primarily dominated by Sony, Nintendo, newcomer Microsoft, and their respective systems. Sega, being Nintendo's main rival in the 1980s and 1990s, left the console market in 2002 in favor of returning to third-party development, as they once were. Overall the decade saw the last of the low resolution three-dimensional polygons of the 1990s with the emergence of high definition games, and often focused on developing immersive and interactive environments, implementing realistic physics, and improving artificial intelligence.

As the Sonic the Hedgehog series of platform games has grown in popularity, its publisher Sega has expanded the franchise into multiple different genres. Among these are several educational video games designed to appeal to young children. The first attempt to create an educational Sonic game was Tiertex Design Studios' Sonic's Edusoft for the Master System in late 1991, which was canceled despite having been nearly finished. When Sega launched the Sega Pico in 1994, it released Sonic the Hedgehog's Gameworld and Tails and the Music Maker for it. Orion Interactive also developed the 1996 Sega PC game Sonic's Schoolhouse, which used a 3D game engine and had an exceptionally large marketing budget. In the mid-2000s, LeapFrog Enterprises released educational Sonic games for its Leapster and LeapFrog Didj.