Lorisidae (or sometimes Loridae) is a family of strepsirrhine primates. The lorisids are all slim arboreal animals and comprise the lorises, pottos and angwantibos. Lorisids live in tropical, central Africa as well as in south and southeast Asia.

Lorisids have a close, woolly fur, which is usually grey or brown, darker on the top side. The eyes are large and face forward. The ears are small and often partially hidden in the fur. The thumbs are opposable and the index finger is short. The second toe of the hind legs has a fine claw for grooming, typical for strepsirrhines. Their tails are short or are missing completely. They grow to a length of 17 to 40 cm and a weight of between 0.3 and 2 kg, depending on the species. Their dental formula is similar to that of lemurs: 2.1.3.32.1.3.3

Lorisids are nocturnal and arboreal. Unlike the closely related galagos, lorisids never jump. Some have slow deliberate movements, whilst others can move with some speed across branches. It was previously thought that all lorisids moved slowly, but investigations using red light proved this to be wrong. Nonetheless, even the faster species freeze or move slowly if they hear or see any potential predator. This habit of remaining motionless whilst in danger is successful only because of the leafy environment of their jungle home, which helps to conceal their true position. [3] With their strong hands they clasp at the branches and cannot be removed without significant force. Most lorisids are solitary or live in small family groups.

Lorisids have a gestation period of four to six months and give birth to two young. These often clasp themselves to the belly of the mother or wait in nests, while the mother goes to search for food. After three to nine months - depending on the species - they are weaned and are fully mature within 10 to 18 months. The life expectancy of lorises can be to up to 20 years.

There are five genera and eleven species of lorisid. [1]

Loris is the common name for the strepsirrhine primates of the subfamily Lorinae in the family Lorisidae. Loris is one genus in this subfamily and includes the slender lorises, while Nycticebus is the genus containing the slow lorises.

Perodicticinae is a subfamily of the family Lorisidae. It includes four species of African primates as shown under taxonomy below.

Angwantibos are two species of strepsirrhine primates classified in the genus Arctocebus of the family Lorisidae. They are also known as golden pottos because of their yellow or golden coloration. 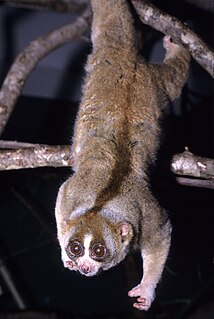 Slow lorises are a group of several species of nocturnal strepsirrhine primates that make up the genus Nycticebus. Found in Southeast Asia and bordering areas, they range from Bangladesh and Northeast India in the west to the Sulu Archipelago in the Philippines in the east, and from Yunnan province in China in the north to the island of Java in the south.

Venomous mammals are animals of the class Mammalia that produce venom, which they use to kill or disable prey, to defend themselves from predators or conspecifics or in agonistic encounters. Venomous mammals are now rare. Mammalian venoms form a heterogeneous group with different compositions and modes of action, from three orders of mammals, Eulipotyphla, Monotremata, and Chiroptera. It has been proposed that some members of a fourth order, Primates, are venomous. To explain the rarity of venom delivery in Mammalia, Mark Dufton of the University of Strathclyde has suggested that modern mammalian predators do not need venom because they are able to kill quickly with their teeth or claws, whereas venom, no matter how sophisticated, requires time to disable prey.

The Sunda slow loris or greater slow loris is a strepsirrhine primate and a species of slow loris native to Indonesia, West Malaysia, southern Thailand and Singapore. It measures 27 to 38 cm from head to tail and weighs between 599 and 685 g. Like other slow lorises, it has a wet nose (rhinarium), a round head, small ears hidden in thick fur, a flat face, large eyes and a vestigial tail.

The Calabar angwantibo, also known as the Calabar potto, is a strepsirrhine primate of the family Lorisidae. It shares the genus Arctocebus with the golden angwantibo. It is closely related to the potto and to the various lorises.

The false potto is a lorisoid primate of uncertain taxonomic status found in Africa. Anthropologist Jeffrey H. Schwartz named it in 1996 as the only species of the genus Pseudopotto on the basis of two specimens that had previously been identified as pottos. The precise provenances of the two specimens are uncertain, but at least one may have come from Cameroon. Schwartz thought the false potto could even represent a separate family, but other researchers have argued that the supposed distinguishing features of the animal do not actually distinguish it from the potto; specifically, the false potto shares several features with West African pottos.

The pygmy slow loris is a species of slow loris found east of the Mekong River in Vietnam, Laos, eastern Cambodia, and China. It occurs in a variety of forest habitats, including tropical dry forests, semi-evergreen, and evergreen forests. The animal is nocturnal and arboreal, crawling along branches using slow movements in search of prey. Unlike other primates, it does not leap. It lives together in small groups usually with one or two offspring. An adult can grow to around 19 to 23 cm long and has a very short tail. It weighs about 450 g (1.0 lb). Its diet consists of fruits, insects, small fauna, tree sap, and floral nectar. The animal has a toxic bite, which it gets by licking a toxic secretion from glands on the inside of its elbows. The teeth in its lower jaw form a comb-like structure called a toothcomb that is used for scraping resin from tree bark.

The Bengal slow loris or northern slow loris is a strepsirrhine primate and a species of slow loris native to the Indian subcontinent and Indochina. Its geographic range is larger than that of any other slow loris species. Considered a subspecies of the Sunda slow loris (N. coucang) until 2001, phylogenetic analysis suggests that the Bengal slow loris is most closely related to the Sunda slow loris. However, some individuals in both species have mitochondrial DNA sequences that resemble those of the other species, due to introgressive hybridization. It is the largest species of slow loris, measuring 26 to 38 cm from head to tail and weighing between 1 and 2.1 kg. Like other slow lorises, it has a wet nose (rhinarium), a round head, flat face, large eyes, small ears, a vestigial tail, and dense, woolly fur. The toxin it secretes from its brachial gland differs chemically from that of other slow loris species and may be used to communicate information about sex, age, health, and social status. 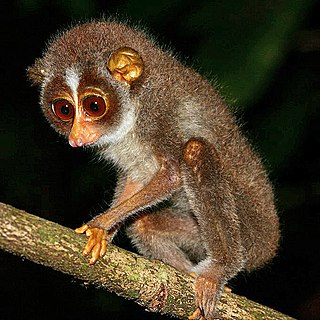 The slender lorises (Loris) are a genus of loris native to India and Sri Lanka. Slender lorises spend most of their life in trees, traveling along the tops of branches with slow and precise movements. They are found in tropical rainforests, scrub forests, semi-deciduous forests, and swamps. The primates have lifespans of 15 years and are nocturnal. Slender lorises generally feed on insects, reptiles, plant shoots, and fruit.

The Javan slow loris is a strepsirrhine primate and a species of slow loris native to the western and central portions of the island of Java, in Indonesia. Although originally described as a separate species, it was considered a subspecies of the Sunda slow loris (N. coucang) for many years, until reassessments of its morphology and genetics in the 2000s resulted in its promotion to full species status. It is most closely related to the Sunda slow loris and the Bengal slow loris (N. bengalensis). The species has two forms, based on hair length and, to a lesser extent, coloration. 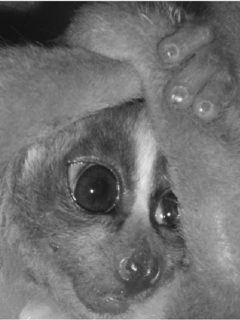 ? Nycticebus linglom is a fossil strepsirrhine primate from the Miocene of Thailand. Known only from a single tooth, an upper third molar, it is thought to be related to the living slow lorises, but the material is not sufficient to assign the species to Nycticebus with certainty, and the species name therefore uses open nomenclature. With a width of 1.82 mm, this tooth is very small for a primate. It is triangular in shape, supported by a single root, and shows three main cusps, in addition to various crests. The absence of a fourth cusp, the hypocone, distinguishes it from various other prosimian primates. 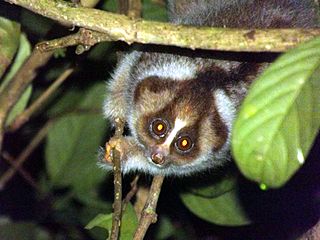 The Kayan River slow loris is a strepsirrhine primate and a species of slow loris that is native to the northern and central highland region of the island of Borneo. The species was originally thought to be a part of the Bornean slow loris (N. menagensis) population until 2013, when a study of museum specimens and photographs identified distinct facial markings, which helped to differentiate it. It is distinguished by the high contrast of its black and white facial features, as well as the shape and width of the stripes of its facial markings.

The Bangka slow loris is a strepsirrhine primate and a species of slow loris that is native to southwestern Borneo and the island of Bangka. Originally considered a subspecies or synonym of the Bornean slow loris (N. menagensis), it was promoted to full species status in 2013 when a study of museum specimens and photographs identified distinct facial markings, which helped to differentiate it as a separate species. It is distinguished by the crimson red fur on its back, light-colored facial features, as well as the shape and width of the stripes of its facial markings.

Nycticebus borneanus, the Bornean slow loris, is a strepsirrhine primate and a species of slow loris that is native to central south Borneo in Indonesia. Formerly considered a subspecies or synonym of N. menagensis, it was promoted to full species status in 2013 when a study of museum specimens and photographs identified distinct facial markings, which helped to differentiate it as a separate species. It is distinguished by its dark, contrasting facial features, as well as the shape and width of the stripes of its facial markings.