Mark Knowles (born 4 September 1971) is a Bahamian professional tennis coach and former professional tennis player, becoming the former number 1 in world as a specialist in doubles tennis. He won three of the four Grand Slam tournaments in men's doubles, partnering with Daniel Nestor, as well as Wimbledon in mixed doubles. At various times between 2002 and 2005 he was ranked World No. 1 in doubles. He is a five-time Olympian.

After being awarded a scholarship to the Nick Bollettieri's famed academy at 10 years old, Knowles played three seasons at UCLA, where he earned All-American honours in both singles and doubles. His highest ATP singles ranking was world no. 96. He was very successful in doubles, partnering Daniel Nestor, Mahesh Bhupathi. With Nestor, Knowles won the 2002 Australian Open, the 2004 US Open and the 2007 French Open. He also won the 2009 Wimbledon Mixed doubles title with Anna-Lena Grönefeld of Germany.

On 5 July 2006, Knowles and Nestor participated in one of the longest matches in Wimbledon history. Their quarterfinal match against Sweden's Simon Aspelin and Australian Todd Perry lasted 6 hours and 9 minutes, with Knowles and Nestor eventually winning 5–7, 6–3, 6–7(5–7), 6–2, 23–21. [1]

His 13-year partnership with Daniel Nestor ended after the 2007 US Open. After reaching the Basel final with James Blake, Knowles reunited with Nestor once again to win the 2007 Tennis Masters Cup. They defeated Simon Aspelin and Julian Knowle, 6–3, 6–2, to take their first Tennis Masters Cup title. [2]

Knowles then played with fellow Grand Slam doubles champion Mahesh Bhupathi, for two seasons in 2008 and 2009, and the two were one of the most successful teams on tour, qualifying for the season-ending championships in both years. After losing in their season debut in Sydney, Knowles and Bhupathi knocked out defending champions Bob Bryan and Mike Bryan in the quarterfinals of the Australian Open, taking the gripping match in a final set tiebreak. The two lost to eventual champions Jonathan Erlich and Andy Ram. Other season highlights included three titles, at Memphis, Dubai and Basel. The victory in Basel gave Knowles his 50th career title.

At the 2009 Australian Open, Knowles and Bhupathi went one step further than the year before, reaching the final before losing to the Bryans in three sets, after winning the first set 6–2. They went on to reach the US Open final later that year, despite the fact that Knowles was hampered by a hand injury that required eight stitches on his dominant hand (right). They also claimed their first ATP World Tour Masters 1000 crown together, winning the Rogers Cup in Montreal. They closed out their partnership at the Barclays ATP World Tour Finals, winning their round-robin group before going down in the semifinals to the Bryans. Knowles also repeated as champion in Memphis with Mardy Fish.

In 2010, Knowles joined forces with Fish, and after both struggled with injuries the first half of the season, the two captured the Legg Mason Tennis Classic in Washington, defeating Tomáš Berdych and Radek Štěpánek in the final. The two advanced to the quarterfinals of the Western & Southern Open in Cincinnati and the third round of the US Open. Knowles finished the season on a high note with a runner-up finish at the ATP World Tour Masters 1000 event in Paris with Andy Ram. The two upset top-ranked Bob Bryan and Mike Bryan in the quarterfinals.

2011 was a tough year for the Bahamian, as his season partner, Michal Mertiňák, went down with a back injury at the French Open. Prior to that, the two made semifinal appearances in San Jose and Memphis and the quarterfinals of the BNP Paribas Open at Indian Wells. After falling in the first round of Wimbledon with Łukasz Kubot, Knowles played his 10th season of World TeamTennis with the Sacramento Capitals, and then partnered Xavier Malisse to the Farmers Classic title at his former college campus, UCLA. The two edged Somdev Devvarman and Treat Conrad Huey to give the Bahamian his 54th doubles title. Knowles and Malisse also reached the quarterfinals in Washington and the third round at the US Open.

In October, Knowles was invited to participate in the 19th annual World TeamTennis Smash Hits charity event in Cleveland, co-hosted by Sir Elton John and Billie Jean King. Knowles was selected by John as a member of his team, which went on to win the exhibition 19–18. The event raised over $500,000 for various AIDS charities.

At the 2012 SAP Open, Knowles rejoined Malisse to win the ATP World Tour 250 event in San Jose, becoming the first men's player over 40 to win a tour-level doubles title since John McEnroe.

Knowles was a standout at UCLA for three years, earning All-American honors in singles and doubles before turning pro in 1991.

Representing the Bahamas, Knowles competed in five consecutive Olympic Games (1992-2008) and is his country's all-time leader in Davis Cup wins, playing in 29 ties. He received the prestigious Davis Cup Commitment Award from ITF president Francesco Ricci Bitti at the All England Club in 2014.

In World TeamTennis, Knowles was the captain of the Sacramento Capitals for 10 years, picking up three Male MVP Awards. His team won championships in 2002 and 2007.

Knowles announced his retirement from professional tennis in September 2012, [3] but took part in men's and mixed doubles at Wimbledon 2013, where he and British player Jamie Delgado shared the all-time male record for playing in consecutive Wimbledon tournaments, with 22 appearances in the Open era. However the following year 2014, Jamie Delgado played doubles in the main draw to take the record of 23 appearances, while Knowles returned for an exhibition doubles only. [4]

During his final full season on tour, Knowles was hired by his former doubles partner Mardy Fish to coach him. They began working together in Miami in 2012.

Knowles was elected by his peers as Vice-President of the ATP and was selected to be on the ATP Drug Force Council. 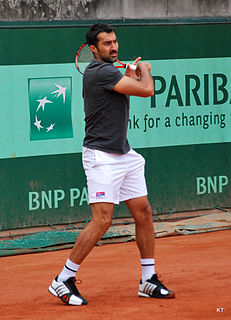 Mahesh Shrinivas Bhupathi is a retired Indian professional tennis player. In 1997, he became the first Indian to win a Grand Slam tournament. With his win at the Australian Open mixed doubles in 2006, he joined the elite group of eight tennis players who have achieved a career Grand Slam in mixed doubles. He is also the founder of International Premier Tennis League. In December 2016, Bhupathi was appointed as India's next non-playing Davis Cup captain and took over the reins from Anand Amritraj in February 2017.

Daniel Mark Nestor is a Yugoslavian-born Canadian retired professional tennis player. He is one of the foremost doubles players in tennis history due to his longevity and continued success at the top of the men's game. As of March 2018, he is 10th for most men's ATP titles in Open Era history. In January 2016, Nestor became the first doubles player in ATP history to win 1000 matches. He was continuously ranked in the top 100 in doubles from April 1994 to April 2018, a total of 1134 consecutive weeks. 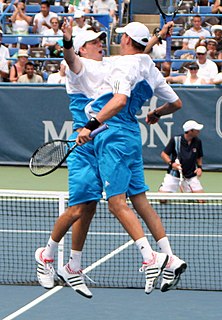 The Bryan Brothers, identical twin brothers Bob Bryan and Mike Bryan, are retired American professional doubles tennis players and the most successful duo of all time. They were born on April 29, 1978, with Mike being the elder by two minutes. The Bryans have won multiple Olympic medals, including the gold in 2012 and have won more professional games, matches, tournaments and Grand Slams than any other men's pairing. They held the World No. 1 doubles ranking jointly for 438 weeks, which is longer than anyone else in doubles history, and have also enjoyed that World No. 1 ranking together for a record 139 consecutive weeks. They have finished as the ATP year-end number 1 doubles team a record 10 times. Between 2005 and 2006, they set an Open Era record by competing in seven consecutive men's doubles Grand Slam finals.

Pavel Vízner is a retired professional male tennis player from the Czech Republic. Vízner has reached the French Open final twice, having had turned professional in 1990 and achieved a career high doubles ranking of World No. 5 in November 2007.

Stephen Huss and Wesley Moodie were the defending champions but lost in the third round to Simon Aspelin and Todd Perry. 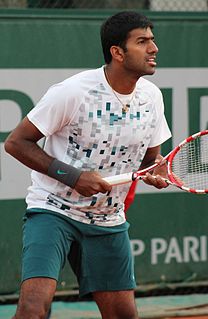 Rohan Bopanna is an Indian professional tennis player. His singles career-high ranking was world No. 213 in 2007 and his career-high ranking in doubles was world No. 3 on 22 July 2013. Recently, most of his appearances in professional tournaments have been in doubles matches. He has been a member of the Indian Davis Cup team since 2002. In 2010, he finished as a runner-up in doubles at the US Open, partnering with Aisam-ul-Haq Qureshi. He won the 2017 French Open mixed-doubles title with Gabriela Dabrowski becoming the fourth Indian player to win a Grand Slam title.

Simon Aspelin is a former professional tennis doubles player from Sweden who turned professional in 1998. His success mainly came in doubles, winning 12 titles and reaching World No. 7 in March 2008. In men's doubles, Aspelin won the 2007 US Open and the Silver medal at the 2008 Summer Olympics.

Arnaud Clément and Michaël Llodra defeated the defending champions Bob and Mike Bryan in the final, 6–7(5–7), 6–3, 6–4, 6–4, to win the Gentlemen's Doubles title at the 2007 Wimbledon Championships The French duo won their first Grand Slam as a team, however this was Llodra's third, having won the Australian Open twice previously with Fabrice Santoro in 2003 and 2004.

Xavier Malisse and Olivier Rochus were the defending champions, but lost in the third round against third seeds and eventual finalists Bob & Mike Bryan.

Jonas Björkman and Todd Woodbridge successfully defended their title for a third year, defeating Julian Knowle and Nenad Zimonjić in the final, 6–1, 6–4, 4–6, 6–4, to win the Gentlemen's Doubles title at the 2004 Wimbledon Championships With the title Woodbridge broke Laurence and Reginald Doherty's record of eight Wimbledon men's doubles titles.

The 2008 Tennis Masters Cup was a men's tennis tournament played on indoor hard courts. It was the 39th edition of the year-end singles championships, the 34th edition of the year-end doubles championships, and part of the 2008 ATP Tour. It took place at the Qizhong Forest Sports City Arena in Shanghai, China, from November 9 through November 16, 2008.

Arnaud Clément and Michaël Llodra were the defending champions, but were forced to withdraw due to a left arm injury for Llodra.

This page covers all the important events in the sport of tennis in 2009. Primarily, it provides the results of notable tournaments throughout the year on both the ATP and WTA Tours, the Davis Cup, and the Fed Cup. 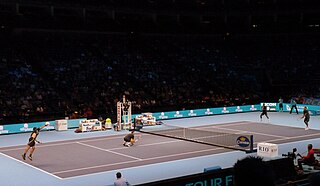 The 2011 ATP World Tour Finals (also known as the 2011 Barclays ATP World Tour Finals for sponsorship reasons) was a tennis tournament that was played at the O2 Arena in London, United Kingdom between 20 and 27 November 2011. The defending champion in singles was Roger Federer, while the defending champions in doubles were Daniel Nestor and Nenad Zimonjić. However, they did not defend their title together because they separated after the 2010 event. Zimonjic partnered with Michaël Llodra for the season, and Nestor partnered with Max Mirnyi. Federer successfully defended his crown, winning a record-breaking sixth title, while Nestor and Mirnyi captured the doubles title. 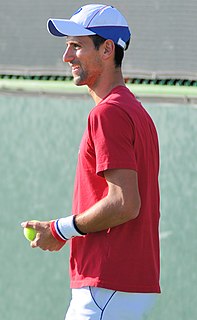