John David Newcombe, AO, OBE (born 23 May 1944) is a former tennis player from Australia who is one of the few men to have attained a world No. 1 ranking in both singles and doubles. At the majors, he won seven singles titles and a former record 17 men's doubles titles. He also contributed to five Davis Cup titles for Australia during an age when Davis Cup was deemed as significant as the majors. [2] Tennis magazine rated him the 10th best male player of the period 1965–2005.

Newcombe played several sports as a boy before devoting himself to tennis. He was the Australian junior champion from 1961 to 1963 and was a member of Australia's Davis Cup winning team in 1964. He won his first Grand Slam title in 1965 by taking the Australian Championships doubles title with fellow Australian Tony Roche. That same year, the duo won the Wimbledon doubles title. They teamed to win the Australian doubles championship three more times, Wimbledon another four times and the US Championships in 1967, the French Championships in 1967, and the French Open in 1969. They won 12 Grand Slam titles, which remained the all-time record for a men's doubles team until 2013, when it was surpassed by Bob and Mike Bryan.

Newcombe's powerful serve and volley was the backbone of his attacking game. He frequently came up with a second-serve ace. He was the top ranked amateur in the world in 1967 according to Lance Tingay, although Rex Bellamy ranked him second behind Roy Emerson. As a professional, Newcombe was the joint world No. 1 player in 1970 and 1971. In singles play, he was a two-time winner of the Australian Open, a three-time winner of Wimbledon, and a two-time winner of the US Open.

In January 1968, he signed a three-year professional contract with Lamar Hunt's World Championship Tennis (WCT) and became part of the "Handsome Eight", the original eight WCT players. [3] As a member of the WCT professional tour group and the Players' Union, Newcombe was banned by the International Tennis Federation from competing in the 1972 Wimbledon Championships and he joined the ATP boycott of the event in 1973.

Newcombe was the last of the Australians who dominated tennis in the 1950s, 60s and 70s.

In his 1979 autobiography, Jack Kramer, the long-time tennis promoter and great player himself, included Newcombe in his list of the 21 greatest players of all time. [4]

Newcombe was captain of the Australian Davis Cup team from 1995 until 2000.

He was inducted into the Sport Australia Hall of Fame in 1985 and in 1986 his achievements were recognized with his induction into the International Tennis Hall of Fame. [5]

James Scott Connors is a retired American world No. 1 tennis player, often considered among the greatest in the history of the sport. He held the top ATP ranking for a then-record 160 consecutive weeks from 1974 to 1977 and a career total of 268 weeks. 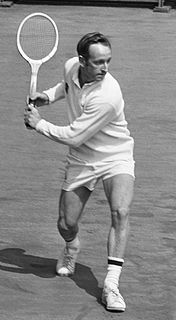 Rodney George Laver, better known as Rod Laver, is an Australian former tennis player. He was the No. 1 ranked professional from 1964 to 1970, spanning four years before and three years after the start of the Open Era in 1968. He also was the No. 1 ranked amateur in 1961–62. 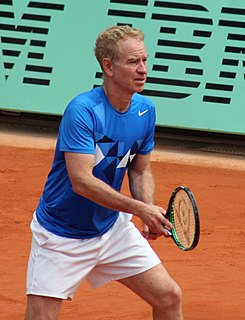 John Patrick McEnroe Jr. is an American retired tennis player. He was known for his shot-making artistry and volleying skills, and for confrontational on-court behavior that frequently landed him in trouble with umpires and tennis authorities. 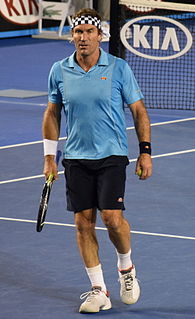 Patrick Hart Cash is a retired Australian professional tennis player. He reached a career-high ATP singles ranking of world No. 4 in May 1988 and a career-high ATP doubles ranking of world No. 6 in August 1988. He has been described as one of the greatest net players of all time by Sport Australia Hall of Fame. After winning the men's singles championship at Wimbledon in 1987, he climbed into the stands to celebrate, starting a tradition which has been followed by many winners in subsequent years.

Kenneth Robert Rosewall is a former world top-ranking amateur and professional tennis player from Australia. He won a record 23 tennis Majors, including 8 Grand Slam singles titles and, before the Open Era, a record 15 Pro Slam titles; overall, he reached a record 35 Major finals. He won the Pro Grand Slam in 1963. Rosewall won 9 slams in doubles with a career doubles grand slam. He is considered to be one of the greatest tennis players of all time. He had a renowned backhand and enjoyed a long career at the highest levels from the early 1950s to the early 1970s. Rosewall was one of the two best male players for about nine years and was the World No. 1 player for a number of years in the early 1960s. He was ranked among the top 20 players, amateur or professional, every year from 1952 through 1977. Rosewall is the only player to have simultaneously held Pro Grand Slam titles on three different surfaces (1962–1963). At the 1971 Australian Open he became the first male player during the open era to win a Grand Slam tournament without dropping a set. Rosewall won pro world championship tours in 1963, 1964, and the WCT titles in 1971 and 1972. 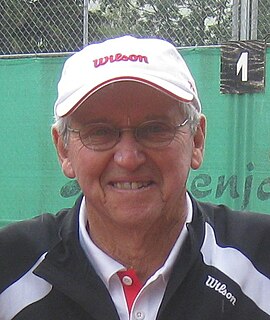 Roy Stanley Emerson is an Australian former World Number One tennis player who won 12 Grand Slam singles titles, 16 Grand Slam men's doubles titles, and 2 Grand Slam mixed doubles titles. He has 28 Grand Slam titles. He is the only male player to have completed a Career Grand Slam in both singles and doubles. His 28 major titles are the all-time record for a male player. Emerson is the first male player to win each of the four major titles at least twice in his career. He is one of only eight men to win all four majors in his career. The others are Fred Perry, Don Budge, Rod Laver, Andre Agassi, Roger Federer, Rafael Nadal and Novak Djokovic. 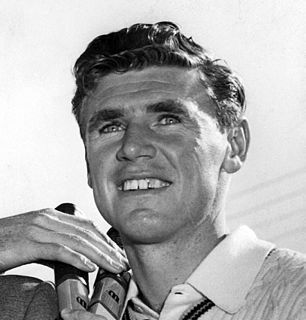 Francis "Frank" Arthur Sedgman, is a retired World No. 1 amateur tennis champion. In his 1979 autobiography Jack Kramer, the long-time tennis promoter and player, included Sedgman in his list of the 21 greatest players of all time. Sedgman is one of only five tennis players all-time to win a multiple slam set in two disciplines, matching Margaret Court, Roy Emerson, Martina Navratilova and Serena Williams. In 1951 he and Ken McGregor won the men's doubles Grand Slam. Sedgman turned professional in 1953. 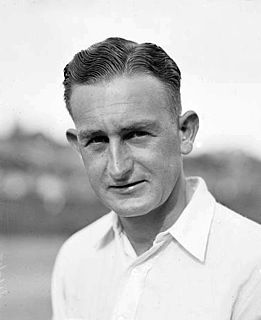 John Herbert Crawford, was an Australian tennis player during the 1930s. He was the World No. 1 player for 1933, during which year he won the Australian Open, the French Open, and Wimbledon, and was runner-up at the U.S. Open in five sets, thus missing the Grand Slam by one set that year. He also won the Australian Open in 1931, 1932, and 1935. He was inducted into the International Tennis Hall of Fame in 1979.

Marion Anthony Trabert is a former American World No. 1 tennis champion and long-time tennis author, TV commentator, instructor, and motivational speaker. In his 1979 autobiography Jack Kramer, the long-time tennis promoter and great player himself, included Trabert in his list of the 21 greatest players of all time. 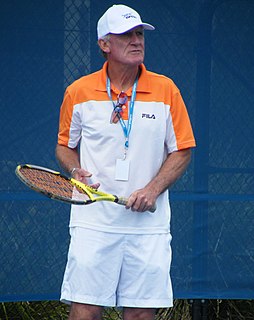 Anthony Dalton Roche, AO, MBE is an Australian former professional tennis player, a native of Tarcutta. He played junior tennis in the New South Wales regional city of Wagga Wagga. He won one Grand Slam singles title and thirteen Grand Slam doubles titles, and was ranked as high as World No. 2 by Lance Tingay of The Daily Telegraph in 1969. He also coached multi-Grand Slam winning World No. 1s Ivan Lendl, Patrick Rafter, Roger Federer and Lleyton Hewitt, and former World No. 4 Jelena Dokic. 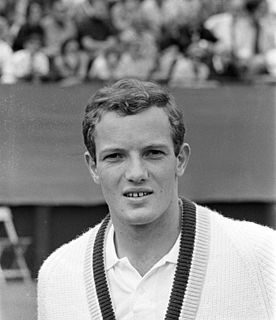 Thomas Samuel Okker is a Dutch former tennis player who was active from the mid-1960s until 1980. He was ranked among the world's top-ten singles players for seven consecutive years, 1968–74, reaching a career high of world No. 3 in 1974. He also was ranked world No. 1 in doubles in 1969. 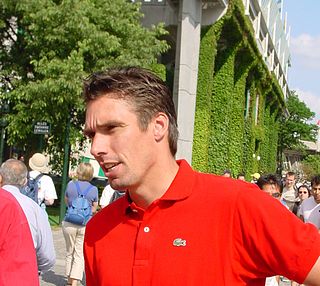 Michael Detlef Stich is a former professional tennis player from Germany. He won the men's singles title at Wimbledon in 1991, the men's doubles titles at both Wimbledon and the Olympic Games in 1992, and was a singles runner-up at the 1994 US Open and the 1996 French Open. Stich won 18 singles titles and ten doubles titles. His career-high singles ranking was world No. 2 in 1993.

Mark Raymond Woodforde, OAM is a former professional tennis player from Australia. He is best known as one half of "The Woodies", a doubles partnership with Todd Woodbridge.

Anders Per Järryd is a former professional tennis player from Sweden. During his career he won eight Grand Slam doubles titles, reached the world No. 1 doubles ranking, and achieved a career-high singles ranking of world No. 5.

Jim Pugh is a former professional tennis player from the United States. He grew up in Palos Verdes, California and at age 10 began taking tennis lessons from John Hillebrand. He played tennis at UCLA. He became a doubles specialist on the ATP Tour and won three Grand Slam men's doubles titles and five Grand Slam mixed doubles titles. Pugh reached the World No. 1 doubles ranking in 1989.

Frew Donald McMillan is a former professional male tennis player from South Africa who won five major doubles championships including three Wimbledons with Bob Hewitt. Altogether, he won 63 doubles titles, surpassed only by the Bryan brothers, Todd Woodbridge, John McEnroe and Tom Okker. He was also ranked No.1 in Doubles on the ATP Computer for a significant period from 1977 to 1979 when he was aged 37. 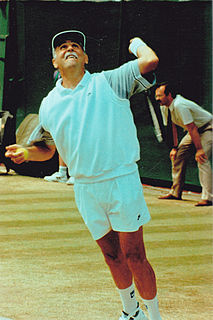 Paul Gerken is a former professional tennis player from the United States.