Mirroring developments in the UK, a group called the National Front evolved from the New Zealand branch of the League of Empire Loyalists in 1967. [1] It was led by Brian Thompson; another notable member was Roger Clare who would later become an activist with the League of St George. [2] It published a magazine called Counter-attack. This group dissolved by the beginning of the 1970s. Thompson remained an overseas supporter of the UK National Front.

Recreation of the late 1970s

The party's first chairman was David Crawford, aided by Brian Thompson. Kerry Bolton joined in 1978. It distributed "large numbers of Holocaust denial pamphlets and books". [4] Thompson represented the party at the march in Lewisham in 1977. [5] The party encouraged its activists to infiltrate mainstream parties such as the National Party. [6] From June 1978 the party jointly published a magazine called Frontline with the National Front of Australia. After the end of the Australian group in 1984, the magazine continued until March 1987 in support of a more general non-party "nationalist cause".

The organisation became close to ending during the early 1980s; many of its members left to form the 'New Force' which Bolton formed in 1981.

In 1989 Anton Foljambe sought to revive the Frontline title for his "Conservative Front" grouping. This led to the reformation of the NZNF with Foljambe as leader. It published a magazine, edited by Foljambe, called Viewpoint. Foljambe resigned as leader in 1997 and established the rival National Democrats Party in 1999. Kyle Chapman, who has said he was interested in right-wing politics since the age of 12, [7] then led the party until resigning as leader in 2005. Bolton rejoined the party in 2004. From 2008, Colin Ansell led the group. Ansell stated that the group was to be a "broad spectrum nationalist movement" with a "strong view on immigration". [8]

On 23 October 2004, the National Front held a protest in Wellington to support retaining the current New Zealand flag, which was attended by an estimated 45 people. [9] An 800-strong counter-demonstration was organised by the MultiCultural Aotearoa coalition and anarchists to expose the sympathies of the National Front. [10] According to The New Zealand Herald , Chapman complained the following day of "insufficient police protection". [11] This "Flag Day Rally" has now become an annual event, with NF members and protesters squaring off outside parliament.

In October 2017, a handful of National Front members protested outside Parliament. They were met by "a sea" of counter-protesters. Fights came close to breaking out and police attended the event. [12]

After the Christchurch mosque shootings of 2019, the National Front like other far-right groups "publicly shut up shop" [13] and largely went underground. [14] An RNZ documentary of April 2019 described them as "the old guard of the far-right" in comparison to new movements with more sophisticated networks and use of technology. [15]

As a political party

The National Front has described itself to be a political party, such as in 2010. [16] Leader Kyle Chapman contested the 2004 Christchurch mayoral election, receiving 1,665 votes (1.9%) and coming fifth out of ten candidates. In a blog post, then-former-leader Kyle Chapman declared the National Front would be joining with the National Democrats and another international organisation, the 'New Right' to contest the 2008 election under the name "Nationalist Alliance". [17] [ dead link ] This did not occur; no candidates contested the 2008 election under that name. [18]

According to Te Ara: The Encyclopedia of New Zealand , the discernible policies of the National Front are "homophobia, racism and patriotic nationalism." [16]

MultiCultural Aotearoa (MCA) is an anti-fascist group that was formed in 2004 in response to racist attacks in the New Zealand capital, Wellington.

Fascism in New Zealand has never gained much support, but the organised advocacy of fascist, neo-Nazi, Far-right, white supremacist, and anti-Semitic views has often been present in New Zealand to a limited extent.

The National Policy Institute (NPI) is a white supremacist think tank and lobby group based in Alexandria, Virginia. It lobbies for white supremacists and the alt-right. Its president is Richard B. Spencer.

The National Socialist Party of New Zealand, sometimes called the New Zealand Nazi Party, was a far-right political party in New Zealand. It promulgated the same basic views as Adolf Hitler's Nazi Party in Germany, and had a particular focus on Arabs, Jews and the banking sector.

Colin King-Ansell is a prominent figure in far-right politics in New Zealand. He has been described as "New Zealand’s most notorious Nazi cheerleader and Holocaust denier".

The National Democrats Party (NDP) was a small right-wing political party in New Zealand, formed in 1999 by Anton Foljambe.

The Right Wing Resistance, a right wing group described as neo-nazi, was founded by Kyle Chapman in Christchurch with a group of white nationalists. Its introduction to the New Zealand public was its Christchurch Street Patrols in October 2009, which appeared to target Polynesian youths. 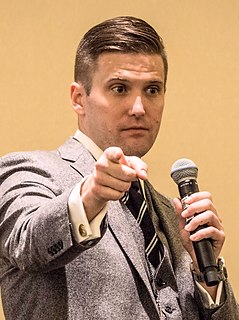 Richard Bertrand Spencer is an American neo-Nazi, anti-semitic conspiracy theorist, and white supremacist who is known for his activism on behalf of the alt-right movement in 2016 and 2017. Spencer calls for the reconstitution of the European Union into a white racial empire, which he believes will replace the diverse European ethnic identities with one homogeneous "white identity". The majority of European nations have banned Spencer and denounced his call for white racial empire. Poland in particular has repeatedly sought to ban Spencer from Europe, citing Spencer's Nazi rhetoric and the Nazis' genocide of Slavic people during World War II. 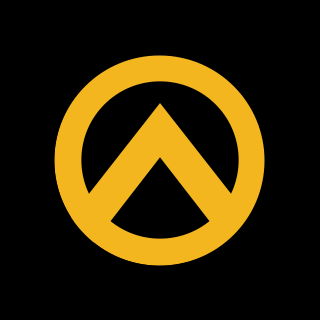 The Identitarian movement or Identitarianism is a post-WWII European far-right political ideology asserting the right of peoples of European descent to culture and territory which are claimed to belong exclusively to people defined as European. Originating in France and building on ontological ideas of modern German philosophy, its ideology was formulated from the 1960s onward by essayists such as Alain de Benoist, Dominique Venner, Guillaume Faye and Renaud Camus, considered the movement's intellectual leaders.

The United Patriots Front (UPF) was a far-right extremist group whose membership was composed of neo-Nazis and fundamentalist Christians. Based in the state of Victoria, UPF was a nationalist anti-Islam organisation that stood in opposition to immigration, opposition to multiculturalism and Islam by demonstrations. It was a splinter group from the anti-Islamic Reclaim Australia group, formed after a dispute between Shermon Burgess and Reclaim Australia organisers. The group has been described by a number of media outlets and journalists as a hate group, and has claimed solidarity with Golden Dawn. The group says it was disbanded in 2017, though no indication of the fact is available, and reports still refer to Cottrell as the leader of UPF. Former Members of the UPF went on to form a new White nationalist group, the Lads Society in late 2017. 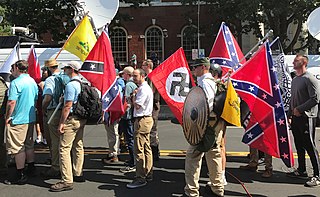 The alt-right, an abbreviation of alternative right, is a loosely connected far-right, white nationalist movement based in the United States. A largely online phenomenon, the alt-right originated in the U.S. during the 2010s, although it has since established a presence in various other countries. The term is ill-defined, having been used in different ways by various self-described "alt-rightists", media commentators, and academics. Groups which have been identified as alt-right also espouse white supremacism, white separatism, severe immigration restrictions, and antisemitism.

Lauren Cherie Southern is a Canadian former right-wing political activist and YouTuber. She has been accused of being white nationalist by opponents, although she identifies as libertarian. In 2015, Southern ran as a Libertarian Party candidate in the Canadian federal election. She worked for The Rebel Media until March 2017, doing independent work before subsequently retiring from political activism in June 2019. 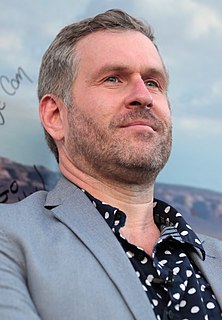 The alt-lite, also known as the alt-light and the new right, is a loosely-defined right-wing political movement whose members regard themselves as separate from both mainstream conservatism and the far-right, white nationalist perspective characteristic of the alt-right. The concept is primarily associated with the United States, where it emerged in 2017.

James Orien Allsup is an American far-right political commentator, podcaster, and former YouTube personality. Allsup has been described as a white supremacist. He has stated that he prefers the term "American nationalist." He is a member of the American Identity Movement, a white nationalist and neo-Nazi organization. Allsup currently podcasts for the neo-Nazi network The Right Stuff.