Sosipater (Greek : Σωσίπατρος) is a person mentioned in the New Testament, in Romans 16:21. He is probably the same person as Sopater mentioned in Acts 20:4.

Sopater was the son of Pyrhus, a man from the city of Berea, mentioned in Acts 20:4. Sopater and others accompanied Paul out of Macedonia after a group of Jews began to plot against Paul, and then sailed from Philippi to Alexandria Troas where they met Paul who had gone by land.

In church tradition, he is known as Sosipater of Iconium, and is numbered among the Seventy Apostles. St. Sosipater's feast days are on April 28 (Slavic tradition), or 29 (Greek tradition) with St. Jason; November 10 with saints Erastus, Olympas, Herodian, Quartus and Tertius; and January 4 with the Seventy. According to Latin tradition, the disciple of St Paul the Apostle died on the 25th of June in Beroea. 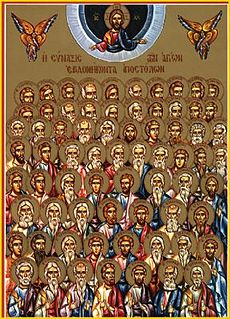 Jason of Thessalonica was a Jewish convert and early Christian believer mentioned in the New Testament in Acts 17:5-9 and Romans 16:21. According to tradition, Jason is numbered among the Seventy Disciples.

Paul the Apostle, commonly known as Saint Paul and also known by his Jewish name Saul of Tarsus, was an apostle who taught the gospel of Christ to the first-century world. Paul is generally considered one of the most important figures of the Apostolic Age and in the mid-30s to the mid-50s AD he founded several churches in Asia Minor and Europe. He took advantage of his status as both a Jew and a Roman citizen to minister to both Jewish and Roman audiences.

Sosipater was born in Achaea. According to legend, he was Bishop in Iconium [1] (prior to the Apostle Tertius) by his relative the Apostle Paul. With the Apostle Jason he traveled to the island of Corfu where they built a church in honor of the Apostle Stephen the Protomartyr and converted many pagans to the Christian faith. Seeing this, the governor of Corfu threw them into prison where they converted seven other prisoners to the Christian faith: Saturninus, Jakischolus, Faustianus, Januarius, Marsalius, Euphrasius and Mammius, known as the Seven Robbers. The governor had those seven put to death by boiling pitch for their faith. 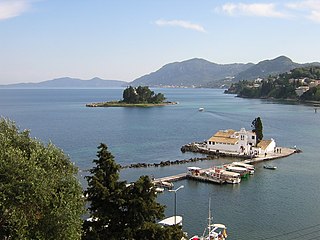 Corfu or Kerkyra is a Greek island in the Ionian Sea. It is the second largest of the Ionian Islands, and, including its small satellite islands, forms the northwesternmost part of Greece. The island is part of the Corfu regional unit, and is administered as a single municipality, which also includes the smaller islands of Ereikoussa, Mathraki and Othonoi. The municipality has an area of 610,9 km2, the island proper 592,8 km2. The principal city of the island and seat of the municipality is also named Corfu. Corfu is home to the Ionian University.

The governor's daughter, the virgin Cercyra  (uk ), having watched these holy apostles being tortured and turned to the Christian faith, distributed all her jewels to the poor. The governor became angry and put her in prison, yet she would not deny Christ. So he had the prison burned, but she remained unharmed. Many people were baptized upon seeing this miracle. He then had her killed with arrows while tied to a tree.

Baptism is a Christian rite of admission and adoption, almost invariably with the use of water, into Christianity. The synoptic gospels recount that John the Baptist baptised Jesus. Baptism is considered a sacrament in most churches, and as an ordinance in others. Baptism is also called christening, although some reserve the word "christening" for the baptism of infants. It has also given its name to the Baptist churches and denominations. 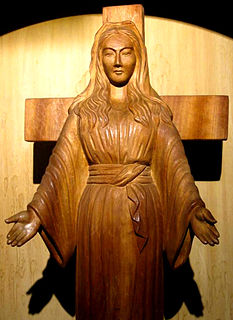 A miracle is an event not explicable by natural or scientific laws. Such an event may be attributed to a supernatural being, magic, a miracle worker, a saint, or a religious leader.

Many believers fled to a nearby island to get away from the enraged governor, but as he chased them his boat sank. The new governor embraced the Christian faith and in baptism received the name Sebastian. From then on Sts. Sosipater and Jason freely preached the Gospel and built up the Church in Corfu until a very old age, when they gave up their souls to God.

Gospel originally meant the Christian message itself, but in the 2nd century it came to be used for the books in which the message was set out. The four canonical gospels — Matthew, Mark, Luke and John — were written between AD 70 and 100, building on older sources and traditions, and each gospel has its own distinctive understanding of Jesus and his divine role. All four are anonymous, and it is almost certain that none were written by an eyewitness. They are the main source of information on the life of Jesus as searched for in the quest for the historical Jesus. Modern scholars are cautious of relying on them unquestioningly, but critical study attempts to distinguish the original ideas of Jesus from those of the later authors. Many non-canonical gospels were also written, all later than the four, and all, like them, advocating the particular theological views of their authors.

Illumined by divine light, O holy apostles,
you wisely destroyed the works of idolatry.
When you caught all the pagans you brought them to the Master
and taught them to glorify the Trinity.

O holy Apostles Jason and Sosipater,
Pray to the merciful God,
That He may grant to our souls
Remission of our transgressions.

O Jason, source of healing,
And Sosipater, glory of the martyrs of Christ:
You were enlightened by the preaching of Paul,
Both becoming a great consolation to the world through your miracles.
Thrice-holy and God-bearing Apostles and defenders of those who suffer,
Intercede with Christ God that He may save our souls.

The Apolytikion or Dismissal Hymn is a troparion (hymn) said or sung at Orthodox Christian worship services. The apolytikion summarizes the feast being celebrated that day. It is chanted at Vespers, Matins and the Divine Liturgy; and it is read at each of the Little Hours. The name derives from the fact that it is chanted for the first time before the dismissal of Vespers. In the Orthodox Church, the liturgical day begins at sunset, so Vespers is the first service of the day. The term apolytikion is used in Greek tradition. In Slavic tradition the term troparion is specifically used to stand for Apolytikion, whilst troparion is of more generic usage in Greek tradition. 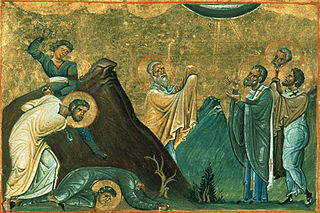 Quartus was an early Christian who is mentioned in the Bible.

Ampliatus, was a Roman Christian mentioned by Paul in one of his letters, where he says, "Greet Ampliatus, whom I love in the Lord." He is considered one of the Seventy Disciples by the Eastern Orthodox Church. He may have served as bishop of Odessos (Varna), in Bulgaria. He is commemorated in the Roman Martyrology on Oct. 31.

Olympas was a Roman Christian whom Paul of Tarsus saluted in around 65 AD.

Erastus, also known as Erastus of Paneas, is a person in the New Testament. According to the Epistle to the Romans, Erastus was a steward in Corinth, a political office of high civic status. The word is defined as "the manager of household or of household affairs" or, in this context, "treasurer"; The King James Version uses the translation "chamberlain", while the New International Version uses "director of public works". A person named Erastus is also mentioned in the 2 Timothy and Acts, and these mentions are usually taken to refer to the same person.

Urban of Macedonia is numbered among the Seventy Apostles. Along with the Apostles Ampliatus, Stachys, Narcissus of Athens, Apelles of Heraklion and Aristobulus of Britannia he assisted Saint Andrew. St. Andrew ordained Urban bishop in Macedonia. He died a martyr, and his feast day is October 31.

Herodion of Patras was a relative of Saint Paul whom Paul greets in Romans 16:11. According to tradition, he was numbered among the Seventy Disciples and became bishop of Patras, where he suffered greatly. After beating, stoning, and stabbing him, they left him for dead, but St. Herodion arose and continued to serve the Apostles.

Rufus of Thebes is numbered among the Seventy Disciples. He was bishop of Thebes in Greece, and is referenced in Romans 16:13. His feast day is April 8. 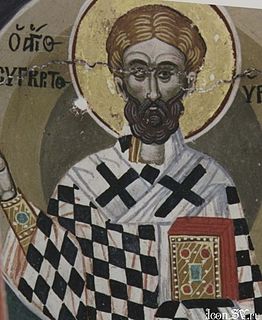 Asyncritus of Hyrcania, also Asynkritos, was numbered among the Seventy Disciples. He was bishop of Hyrcania in Asia. Saint Paul mentions him in his letter to the Romans. The Church remembers St. Asyncritus on April 8.

Phlegon of Marathon is numbered among the Seventy Disciples. He was bishop of Marathon in Thrace. He is referenced in Romans 16:14, and his feast day is on April 8.

Hermes of Dalmatia is numbered among the Seventy Disciples. He was bishop in Dalmatia. He is referenced in Romans 16:14, and his feast days are celebrated on April 8 with his fellow martyrs, and on January 4 among the Seventy. 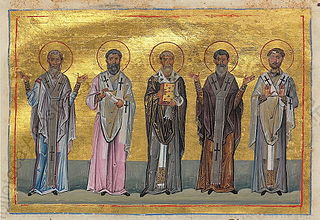 Philologus of Sinope is numbered among the Seventy Disciples, and is commemorated with them on January 4. He is also commemorated on November 5 together with Ss. Patrobas, Hermas, Linus, and Gaius.

According to the New Testament book of Romans, Tertius of Iconium acted as an amanuensis for Paul the Apostle, writing down his Epistle. He is numbered among the Seventy Disciples in a list pseudonymously attributed Hippolytus of Rome, which is found in the margin of several ancient manuscripts.

Carpus of Beroea of the Seventy Disciples is commemorated by the Church on May 26 with Alphaeus, and on January 4 with the Seventy.

Fortunatus was one of the Seventy Disciples, commemorated by the Church on June 15 with Achaicus and Stephen and on January 4 with all of the Seventy. St Fortunatus is mentioned by St Paul in I Corinthians 16:17: I was glad when Stephanas, Fortunatus, and Achaicus arrived, because they have supplied what was lacking from you. 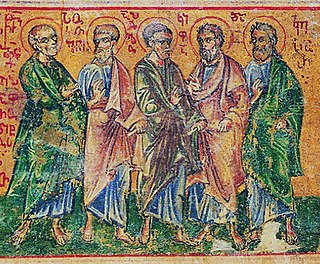 Cephas of Iconium is numbered among the Seventy Disciples, and was bishop of Iconium or Colophon, Pamphylia. The name "Cephas" is Aramaic for "Peter."

This article is derived in whole or in part from Sosipater at OrthodoxWiki, which is dually licensed under CC-By-SA and GFDL. All relevant terms must be followed.