Last updated November 14, 2021
President of the Senate of Puerto Rico
In this Spanish name, the first or paternal surname is Riveraand the second or maternal family name is Schatz.

Thomas Rivera Schatz (born June 10,1966) is a Puerto Rican politician,legal advisor,attorney,and former prosecutor,who was the fourteenth and sixteenth President of the Senate of Puerto Rico. He is affiliated with New Progressive Party of Puerto Rico (abbr. PNP in Spanish) and the mainland Republican Party. On July 22,2019,Rivera Schatz announced that he will take over as acting chair of the PNP following the resignation of Ricardo Rosselló due to the Telegramgate scandal.

Rivera Schatz was born on June 10,1966,in the Bronx Borough of New York City. He is the son of JoséA. "Nía" Rivera,a past mayor of Trujillo Alto,and Christina Schatz,a German woman. [1] While in college,he worked full-time at the City of San Juan Public Works Department. He attended the Interamerican University of Puerto Rico School of Law,where he graduated in 1992. A year later,he passed the bar exam required to practice law in Puerto Rico. [2]

Rivera Schatz started his legal career as a legal advisor in the Senate and House of Representatives of Puerto Rico. In 1996,Governor Pedro Rosselló appointed him as a prosecutor at the Puerto Rico Department of Justice. After finishing his service as a prosecutor,he returned to private practice,handling both criminal and civil cases.

Two years later,party president Pedro Rosselló named Rivera Schatz as secretary general of the PNP in addition to his current position as electoral commissioner. He served both positions simultaneously until August 1,2007,when he decided to run for senator.

Rivera Schatz ran for senator at the PNP primaries where he won a slot in the ballot,receiving the second-most votes. In the 2008 general elections,Rivera Schatz was elected senator. His fellow senators then elected him to be the 14th president of Puerto Rico's Senate. As such,he selected the following persons for his team:

Rivera Schatz was sworn into his post on January 12,2009.

Thomas Rivera Schatz was reelected in 2012 and elected for the third time as a member of the Senate majority in the 2016 election with 10.33% of the "at large" votes,placing him in second place after independent senatorial candidate Dr. JoséVargas Vidot and followed by Juan Dalmau of the Puerto Rico Independence Party (PIP). [3] Rivera Schatz was elected to a second term as President of the Senate of Puerto Rico starting January 2017. [4] He holds two records,first as the only reelected Senate President during the past 28 years and the only Senate President ever elected as such to non-consecutive terms.

On July 22,2019,Rivera Schatz announced he would succeed Puerto Rican Governor Ricardo Rossellóas head of the New Progressive Party of Puerto Rico (PNP). [5] Rossellóannounced his intention to resign due to the ongoing controversy surrounding Telegramgate. [6]

Rivera Schatz and his father are avid collectors of antique cars. [7] [8] 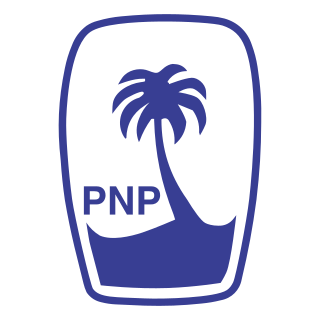 Kenneth Davison McClintock-Hernández is a politician who served as the twenty-second Secretary of State of Puerto Rico,one of the four longest serving in that post. McClintock served as co-chair of Hillary Clinton’s National Hispanic Leadership Council in 2008,he co-chaired her successful Puerto Rico primary campaign that year and served as the Thirteenth President of the Senate of Puerto Rico until December 31,2008. He chaired Luis Fortuño’s Incoming Committee on Government Transition in 2008 and the Outgoing Committee on Government Transition in 2012,the only Puerto Rican to serve in both capacities. He was sworn into office as secretary of state on January 2,2009,by Chief Justice Federico Hernández Denton,fulfilling the role of lieutenant governor in the island.

Jorge Adolfo de Castro-Font is a former Puerto Rican senator and former member of the House of Representatives. Originally,he was a member of the Popular Democratic Party (PPD) but became an independent representative in 2001 after inner disputes with his party. In 2002,he became a member of the New Progressive Party (PNP) and was elected Senator in 2004 and 2008,despite inner struggles within the party and legal issues.

Norma E. Burgos Andújar is a Puerto Rican politician. She has been a member of the Senate of Puerto Rico since 2000. She also served as Lieutenant Governor and the 16th Secretary of State under Governor Pedro Rosselló(1995–1999). 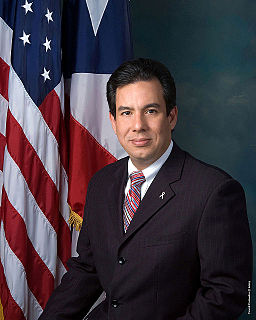 Manuel A. Torres-Nieves,Puerto Rico's longest-serving Secretary of the Senate of Puerto Rico in modern times,first served during the tumultuous years of 2005-2008 in which the Senate was controlled by the pro-statehood New Progressive Party (NPP) while the governorship had been controlled by the pro-status quo Popular Democratic Party,served a second consecutive term as Senate Secretary after having served as Acting President of the Senate from January 1–12,2009,between the Senate presidencies of Kenneth McClintock and Thomas Rivera Schatz. He then served as Puerto Rico's first Electoral Comptroller before his third election as Secretary of the Senate during Rivera Schatz' historic second non-consecutive term as Senate President,which ended January 11,2021. On March 11,2021,Governor Pedro Pierluisi nominated him as Comptroller of Puerto Rico,a constitutional role which requires the advice and consent of both the Senate and the House of Representatives.

Carlos Alberto Díaz Sánchez is a Puerto Rican politician,and former member of the Puerto Rico House of Representatives and Senate. 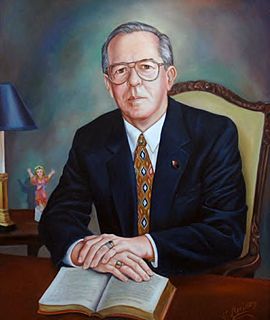 Roberto Rexach Benítez also known as his stage name Bobby,was a Puerto Rican politician,and former Senator and Representative. Rexach Benítez served as the tenth President of the Senate of Puerto Rico from 1993 to 1996. He also served as a member of the Puerto Rico House of Representatives from 1973 to 1976,under the Popular Democratic Party (PPD) and as a member of the Senate (1985–1998) under the pro-statehood New Progressive Party (PNP).

The 2008 Puerto Rico gubernatorial election,took place on November 4,2008 as part of the Puerto Rican general elections. It coincided with the 2008 United States general elections. Then-incumbent governor Aníbal Acevedo Vilá,Democratic,PPD was eligible for reelection,and ran for a second four-year term. His opponent,Luis Fortuño,Republican and PNP Resident Commissioner of Puerto Rico,defeated him. As of 2021,this is the last time a governor was elected in Puerto Rico by a majority instead of a plurality.

The Popular Democratic Party is a political party in Puerto Rico that advocates to continue as a Commonwealth of the United States with self-government. The party was founded in 1938 by dissidents from the Puerto Rican Liberal Party and the Unionist Party and originally promoted policies on the center-left. In recent years,however,its leaders have described the party as centrist.

Nicolás Nogueras Cartagena was a Puerto Rican politician,commentator and Senator. He was a member of the Senate of Puerto Rico for two separate periods of time. First from 1973 to 1985,and then from 1992 to 1996. 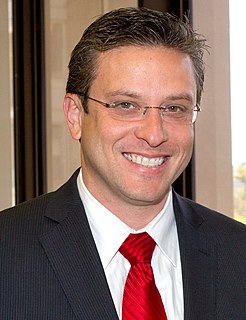 The 2012 Puerto Rican general elections were held on Tuesday,November 6,2012 to elect the officials of the Puerto Rican government that would serve for the next four years,most notably the Governor of Puerto Rico. A status referendum was held on the same date.

The Senate of Puerto Rico majority and minority leaders are Puerto Rican Senators who are elected by the party conferences that hold the majority and the minorities respectively. These leaders serve as the chief Senate spokespeople for their parties and manage and schedule the legislative and executive business of the Senate. By rule,the Presiding Officer gives the Majority Leader priority in obtaining recognition to speak on the floor of the Senate. The Majority Leader customarily serves as the chief representative of his or her party in Senate.

A constitutional referendum was held in Puerto Rico on 19 August 2012. Voters were asked whether they approve of two amendments to the constitution;one to eliminate the absolute right to bail and the other to decrease the number of members of the Legislative Assembly. Despite support from the party in government and part of the main opposition party,both amendments were rejected by voters.

ZoéLaboy Alvarado is a Puerto Rican attorney and public servant. Laboy served as Secretary of the Department of Corrections and Rehabilitation from 1997 to 2000. in 2016 she was elected to become a senator with the New Progressive Party (PNP) where she was the leader of the liberal wing of the party. On August 21,2019,she was appointed as Governor Wanda Vázquez Garced's Chief of Staff. In December 2019,she endorsed former Vice president and presumptive Democratic nominee Joe Biden and has served as co-chair on his 2020 presidential campaign "Puerto Rico for Biden Leadership Committee".

The 2016 Puerto Rican general elections were held in Puerto Rico on Tuesday,November 8,2016 to elect the officials of the Puerto Rican government that will serve from January 2017 to January 2021,most notably the Governor of Puerto Rico. Rossello was elected Governor of Puerto Rico with the second lowest percentage of votes. The election also resulted in a historic 23% drop in turnout. 2016's participation was the lowest voter turnout in Puerto Rican history. Rossello would go on to serve a 2 year term,having to resign after historic protests as a result of Telegramgate scandal. Wanda Vázquez Garced succeeded Rossello.

Andrés Waldemar Volmar Méndez is a Puerto Rican politician and public servant for the New Progressive Party (PNP). He served as the Secretary of Sports and Recreation of Puerto Rico from 2017 to 2018,under Governor Ricardo Rosselló. Volmar is currently running for mayor of his hometown of Dorado,Puerto Rico on the 2020 Puerto Rican general election. He had previously run for the position in 2016,but was defeated by the incumbent Carlos López Rivera.

A special election to elect shadow senators and shadow representatives from Puerto Rico was held on May 16,2021. Voters chose two special delegates to the United States Senate and four special delegates to the United States House of Representatives. Their work is to demand that the US Congress respect and enforce the results of the 2020 status referendum,and admit Puerto Rico as the 51st state of the Union.