The Thomas T and Wesley B Frasier Houses in Brookside, Ohio were built in the 19th century along Route 40. The houses were added to the National Register on 1982-11-17.

The house located at 920 National Road is currently used as Wilson Funeral Home, owned and operated by U.S. Congressman Charlie Wilson, [2] while the house at 898 National Road is used as the private residence of Ohio State Senator Jason Wilson. [3] 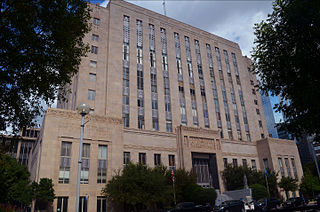 Oklahoma County is a county located in the central part of the U.S. state of Oklahoma. As of the 2010 census, the population was 718,633, making it the most populous county in Oklahoma. The county seat is Oklahoma City, the state capital and largest city.

Ballston Spa is a village and the county seat of Saratoga County, New York, United States, located southwest of Saratoga Springs. The population of the village, named after Rev. Eliphalet Ball, a Congregationalist clergyman and an early settler, was 5,409 at the 2010 census. Ballston Spa lies on the border of two towns, situated partly in the Town of Ballston and partly in the Town of Milton. The Ballston Spa School District encompassing most of the combined towns of Milton, Malta, and Ballston is often referred to locally as ‘Ballston Spa’ with the village proper being referred to as ‘The Village’ or 'Town'. 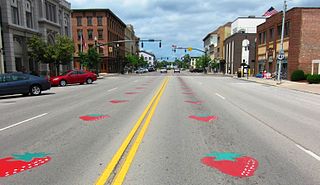 The Cranbrook Educational Community is an education, research, and public museum complex in Bloomfield Hills, Michigan. This National Historic Landmark was founded in the early 20th century by newspaper mogul George Gough Booth. It consists of Cranbrook Schools, Cranbrook Academy of Art, Cranbrook Art Museum, Cranbrook Institute of Science, and Cranbrook House and Gardens. The founders also built Christ Church Cranbrook as a focal point in order to serve the educational complex. However, the church is a separate entity under the Episcopal Diocese of Michigan. The sprawling 319-acre (1,290,000 m2) campus began as a 174-acre (700,000 m2) farm, purchased in 1904. The organization takes its name from Cranbrook, England, the birthplace of the founder's father. 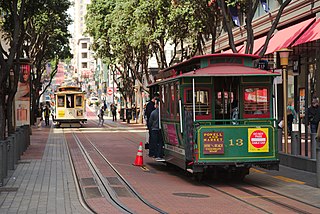 The San Francisco cable car system is the world's last manually operated cable car system. An icon of San Francisco, the cable car system forms part of the intermodal urban transport network operated by the San Francisco Municipal Railway. Of the 23 lines established between 1873 and 1890, only three remain : two routes from downtown near Union Square to Fisherman's Wharf, and a third route along California Street. While the cable cars are used to a certain extent by commuters, the vast majority of their seven million annual passengers are tourists, and as a result, the wait to get on can often reach two hours or more. They are among the most significant tourist attractions in the city, along with Alcatraz Island, the Golden Gate Bridge, and Fisherman's Wharf. The cable cars are listed on the National Register of Historic Places.

Bristow is an unincorporated community of Prince William County in Northern Virginia about 30 miles (48 km) from Washington, D.C. In 2014, Bristow's postal area population was 29,346, a 287% increase since 2000; however, the Bristow community is formally included in the Linton Hall, Virginia census-designated place (CDP).

Idlewild is an unincorporated community in Yates Township, located just east of Baldwin in southeast Lake County, a rural part of northwestern lower Michigan. During the first half of the 20th century, it was one of the few resorts in the country where African-Americans were allowed to vacation and purchase property, before discrimination was outlawed in 1964 through the Civil Rights Act of 1964. The surrounding area is within Manistee National Forest. The community encompasses Lake Idlewild, and the headwaters of the Pere Marquette River extends throughout the region.

The Worthington City School District includes the city of Worthington, Village of Riverlea, and neighboring portions of Perry Township, Sharon Township, and the City of Columbus, Ohio. There are approximately 60,000 people residing in the area with 13,837 in Worthington proper as of 2013. Since July 1, 2015, Trent Bowers is the Superintendent of Worthington Schools. 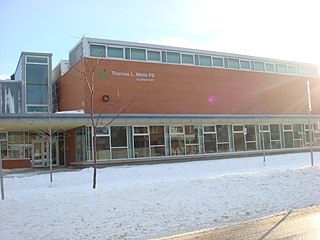 Morningside Heights is a residential neighbourhood in the district of Scarborough in Toronto, Ontario, Canada. It is located in the northeast corner of the city, just north of the Malvern and west of Rouge Park and the Rouge. The subdivision, comprising approximately 750 acres (3.0 km2), was one of the last large tracts of undeveloped land within the City of Toronto, located between Finch Avenue East and Steeles Avenue East, from Tapscott Road to the Rouge River.

Government Hill is a neighborhood in the northwest part of Anchorage, Alaska, sitting in between Anchorage's downtown area and the western reaches of Joint Base Elmendorf-Richardson, specifically the portion formerly known as Elmendorf Air Force Base. The neighborhood is named for the "hill" it sits on of about 115 feet (35 m) bearing the same name, which is actually a bluff which rises alongside the northern banks of Ship Creek. The origins of the name date to 1915, when a federal land reserve was created in the area for the Alaska Engineering Commission, then heavily involved in constructing the Alaska Railroad nearby.

Cedric G. Boulter and Patricia Neils House is a Frank Lloyd Wright-designed registered historic home in the Clifton neighborhood of Cincinnati, Ohio, USA. It was commissioned in 1953, with construction beginning in 1954, and completed in 1956. Additions to the design were completed in 1958.

Brookside is a historic unincorporated community within Mendham Township in Morris County, New Jersey, United States. It is located approximately 6 mi (9.7 km) west of Morristown. It is close to the Washington Valley Historic District in neighboring Morris Township. 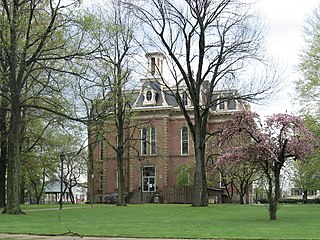 The Coshocton County Courthouse, designed in Second Empire style, is a historic courthouse building located at 349 Main Street in Coshocton, Ohio. It was added to the National Register of Historic Places on 1973-05-22.

Designed by Frank Lloyd Wright in 1953 and completed in 1954, the John and Syd Dobkins House is one of three Wright-designed Usonian houses in Canton, Ohio. Located farther east than the Nathan Rubin Residence and the Ellis A. Feiman House, it is set back from the road. It's a modest sized home with two bedrooms, and one and a half baths. Its distinctive geometric design module is based upon an equilateral triangle. The mortar in the deep red bricks was deeply raked to emphasize the horizontal.

Lafayette's Quarters, also known as the Brookside Inn, is a historic home located on Wilson Road south-southeast of the intersection of Yellow Springs Road and Wilson Road in Tredyffrin Township, Chester County, Pennsylvania. This house is not opened to the public. The house was built in three sections, with the oldest dated to 1763. The center structure is dated to about 1837–1839, and the western section was added between 1882 and 1900. The oldest section is a 2 1/2-story, two bay by three bay, stuccoed stone structure with a gambrel roof. The center section is of stuccoed stone, three bays long and two bays wide. The western section is a frame structure. It was renovated in 1948. During the American Revolution the house served as headquarters for Major General Gilbert du Motier, marquis de Lafayette in late-1777 and early-1778, during the encampment at Valley Forge. 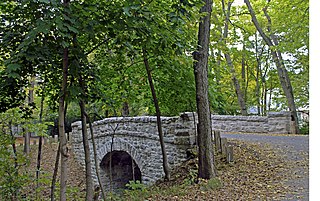 The Old Beechwold Historic District is a neighborhood and historic district in Clintonville, Columbus, Ohio. The site was listed on the Columbus Register of Historic Properties in 1985 and the National Register of Historic Places in 1987. The district is significant for its architecture, landscape architecture, and community planning. The houses are of the early 20th century, using stone, brick, and stucco.