The Imperial Glass Company is located in Bellaire, Ohio with a factory located on 29th Street and the offices located on Belmont Street. The factory was razed in 1995 to make room for commercial development and the Belmont Street location was transformed into a museum known as the National Imperial Glass Museum. [2] The building was placed on the National Register on 1983-09-08.

The Imperial Glass Company was founded in 1901 by Edward Muhleman, with production beginning in 1904. The handmade glasswares were sold worldwide and were usually made of pressed glass patterns. The factory located at 29th Street was labeled as one of the largest glass factories under one roof. [3] The company's most famous product is their "Candlewick" series, which even has a street named for it in Bellaire.

The company hit rough times in the early 1970s and was close to bankruptcy. Imperial was saved by Lenox and turned to general manufacture, but low demand eventually led to its closure in 1984. The building on Belmont Street was eventually turned into a museum housing many pieces from the company's long run, as well as a history of the company. [4]

Collinsville is a village and census-designated place (CDP) in the town of Canton, Hartford County, Connecticut, United States. The population was 3,746 at the 2010 census. The central portion of the village is a historic district listed on the National Register of Historic Places. 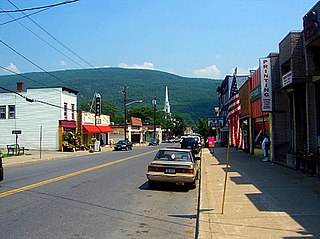 Ellenville is a village in Ulster County, New York, United States. The population was 4,135 at the 2010 census.

Bellaire is a village in Belmont County, Ohio, United States. It is part of the Wheeling, West Virginia Metropolitan Statistical Area, and Wheeling is across the Ohio to the east. The population was 4,278 at the 2010 census, having had its peak in 1920. The city is located along the Ohio River. 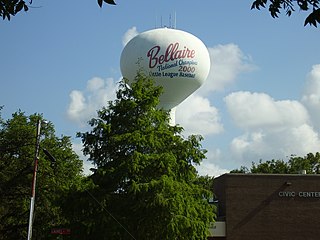 Bellaire is a city in southwest Harris County, Texas, United States, within the Houston–Sugar Land–Baytown metropolitan area. As of the 2010 U.S. census, the city population was 16,855. In 2019, its population increased to 18,971. It is surrounded by the cities of Houston and West University Place. Bellaire is known as the "City of Homes," owing to its mostly residential character; however, there are offices along the 610 Loop within the city limits. 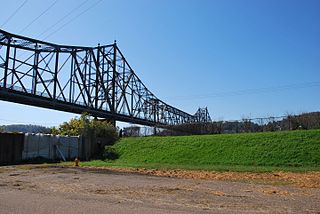 Cambridge Glass was a manufacturer of glassware formed in 1873 in Cambridge, Ohio. The company produced a range of coloured glassware in the 1920s, initially with opaque shades, but moving on to transparent shades by the end of the decade. Unable to compete with mass-produced glassware, the company closed briefly in 1954, but was reopened in 1955. However, financial difficulties persisted, and, after several ownership changes, the factory closed for good in 1958. Imperial Glass Company purchased the Cambridge Glass molds two years later, and would use them for another three decades until that company went bankrupt in 1984.

The A.H. Heisey Company was formed in Newark, Ohio, in 1895 by A.H. Heisey. The factory provided fine quality glass tableware and decorative glass figurines. Both pressed and blown glassware were made in a wide variety of patterns and colors. The company also made glass automobile headlights and Holophane Glassware lighting fixtures. The company was operated by Heisey and his sons until 1957, when the factory closed.

The Fostoria Glass Company was a manufacturer of pressed, blown and hand-molded glassware and tableware. It began operations in Fostoria, Ohio, on December 15, 1887, on land donated by the townspeople. The new company was formed by men from West Virginia who were experienced in the glassmaking business. They started their company in northwest Ohio to take advantage of newly discovered natural gas that was an ideal fuel for glassmaking. Numerous other businesses were also started in the area, and collectively they depleted the natural gas supply. Fuel shortages caused the company to move to Moundsville, West Virginia in 1891.

Belmont Glass Company, also known as the Belmont Glass Works, was one of Ohio's early glassmaking companies. It was named after Belmont County, Ohio, where the plant was located. The firm began operations in 1866 in a riverfront village along the east side of the county, which is known as Bellaire. At that time, the community had resource advantages that made it an attractive site for glassmaking. Bellaire's location at the intersection of the Ohio River, the National Road, and two railroads meant it had an excellent transportation infrastructure. Fuel necessary for the glassmaking process was also readily available, since Belmont County was part of the eastern Ohio coal region. Bellaire also had a workforce with glassmaking expertise located less than five miles away, since glass had been produced in Wheeling, West Virginia, since the 1820s.

Henry Crimmel was an American glassmaker who became well known in Ohio and Indiana. A German that came with his family to America at the age of eight years, the American Civil War veteran started at the lowest level in glass making, and learned every aspect of the business. A skilled glassblower known for his glassmaking expertise and the recipient of two patents, he also worked in management in at least three glass factories – and was one of the co-founders of the Novelty Glass Company and the reorganized version of Sneath Glass Company. He retired with over 50 years in the industry. 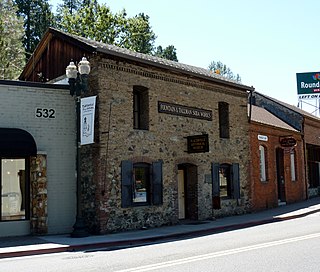 The Fountain-Tallman Soda Works is a historic building in Placerville, El Dorado County, California. It currently houses the Fountain & Tallman Museum, which is owned and operated by the El Dorado County Historical Society. The rustic vernacular Victorian stone and brick building, of the Gold Country, was placed on the National Register of Historic Places on September 13, 1984. 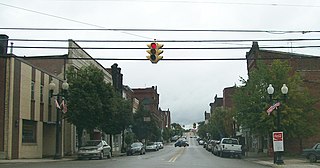 The Barnesville Historic District consists of the oldest part of Barnesville, Ohio, originally platted in 1808 and contains roughly 40 acres and 180 buildings. The district was added to the National Register on July 19, 1984.

Rock Hill Presbyterian Church is located at 52644 High Ridge Road in Bellaire, Ohio. The building was placed on the National Register on 2009-02-18.

The Zweig Building is a historic commercial building in downtown Bellaire, Ohio, United States. Constructed in 1912, it is an early example of the Chicago school. Constructed of brick, the building sits on a stone foundation and is covered with an asphalt roof. Four stories tall, the facade is four bays wide and the side eight bays wide, with two windows in each bay on each floor. Prominent pilasters separating the bays, in which are placed glass display windows on the first floor, both front and side. To the rear, part of the basement is exposed, due to sloping ground. The Windsor Hotel, established to serve travellers on the Pennsylvania Railroad, was formerly located behind the Zweig. During the early twentieth century, the building was used by small businesses, such as dentists and jewellers.

The Bona Allen Company is a tannery and leather goods factory that opened in 1873 in Buford, Georgia. It became the nation's largest producer of hand-tooled saddles, bridles, horse collars, postal bags, cowboy boots, and shoes and had a contract to supply the sporting equipment giant, Spalding, with raw material for the manufacture of baseballs and baseball mitts. Starting in the early 20th century Bona Allen saddles were offered in the Sears Mail Order catalog under a variety of names. The Bona Allen Company was owned by Bonaparte Allen Sr. Also known as the Bona Allen Shoe and Horse Collar Factory, the factory closed in 1981 after a fire, and the main tannery building was added to the National Register of Historic Places on January 3, 2005. It is located at 554 West Main Street. After another fire on February 10, 2015, firefighters allowed the building to burn itself down. 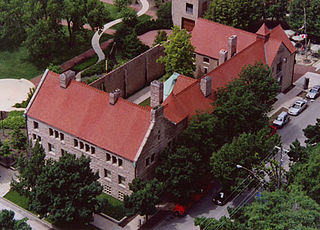 Duncan & Miller Glass Company was a well-known glass manufacturing company in Washington, Pennsylvania. Items that were produced by the company are known as "Duncan glass" or "Duncan Miller glass." The company was founded in 1865 by George Duncan with his two sons and son-in-law in the South Side neighborhood of Pittsburgh, Pennsylvania. By 1890, the company joined other glass companies to form the United States Glass Company, a powerful glass trust. In 1892, the factory was destroyed in a fire, and the company was relieved of its trust relationship with the US Glass Company. After the fire, the second generation of the Duncan family moved operations to Washington, Pennsylvania. In 1900, John Ernest Miller, the company's long-time designer, became a full shareholder along with members of the Duncan family. By 1955, economic pressures from machine-produced glass forced the company to sell off its assets to the US Glass Company, who continued to produce Duncan-style glass until 1980.

Novelty Glass Company of Fostoria was one of over 70 glass manufacturing companies that operated in northwest Ohio during the region's brief Gas Boom in the late 19th century. The company made drinking glasses, bar goods, and novelties. Organization of the firm began late in 1890, with banker Rawson Crocker as president and veteran glass man Henry Crimmel as plant manager. Production started in February 1891. The plant was built on the site of the former Buttler Art Glass Company, which had been destroyed by fire in 1889.

J. H. Hobbs, Brockunier and Company was one of the largest and best known manufacturers of glass in the United States in the 19th century. Its products were distributed world-wide. The company is responsible for one of the greatest innovations in American glassmaking—an improved formula for lime glass that enabled American glass makers to produce high-quality glass at a lower cost. The firm also developed many of the talented glassmakers that started glass factories in Ohio and Indiana.