The tavern's construction date varies widely in different sources. A history of Belmont County published in 1903 proposed that it had been built in 1812; [2] the U.S. Department of Transportation believes that it was constructed in 1828; [3] a restoration firm, Centennial Preservation Group, states that it was erected in 1825; [4] and the National Park Service gives its construction year as 1831. [1] Built of brick on a foundation of sandstone, the tavern is covered with a tin roof and features elements of sandstone and slate. [5] The two-and-a-half-story building features a gabled roof, while the overall design includes a rear ell faced by porches on both sides. [3]

Numerous taverns were constructed along the National Road in its earliest years, as the road saw its golden years between 1825 and 1845. However, the coming of railroads later in the century relegated the road to a farm track by 1900, and its businesses and towns were reduced to serving only local needs. Although it survived the neglect of long-distance travelers, the Brick Tavern House gradually fell into dilapidation; by 2012, its windows were boarded up, and the entire structure was tending toward collapse, [6] even though it was part of the campus of Ohio University East. [7] To save the building, the university applied for historic preservation grants from the federal government, and in September 2006 the U.S. Department of Transportation announced that they had been awarded $128,000 for restoration. [3] Restoration was forced to wait; early 2012 saw the tavern still deteriorating amid a protracted bidding process. [6] Ultimately, the Belmont County Commissioners agreed to permit bidding for renovation, including roof repairs, in April 2012, [8] and construction had been finished by June of the following year. Work was performed by Centennial Preservation Group, [4] with assistance by Hays Landscape Architecture. [9]

In 1995, amid its deterioration, the Brick Tavern House was listed on the National Register of Historic Places, qualifying because of its place in local history; a secondary building was included with the tavern in the designation. [1] Part of its historical importance derives from its location next door to the Great Western Schoolhouse, another National Register-listed building; local school districts use the schoolhouse for field trips, and the restoration grant was awarded in hopes that the renovated tavern might become a museum in connection with the schoolhouse. [3]

The Josiah Kirby House is a historic residence in the city of Wyoming, Ohio, United States. Erected in the late nineteenth century, it was originally the home of a prominent Cincinnati-area businessman and politician, and it has been designated a historic site. 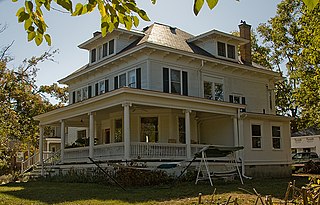 The Charles H. Moore House is a historic residence in the city of Wyoming, Ohio, United States. Built in 1910 and home for a short time to a leading oilman, it has been designated a historic site. 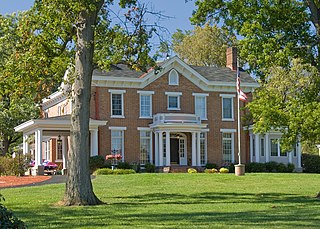 The Riddle–Friend House is a historic residence in Wyoming, Ohio. Constructed in the early nineteenth century, it has been home to some of the area's earliest residents, and it has been named a historic site as a rare survivor of the city's earliest years. 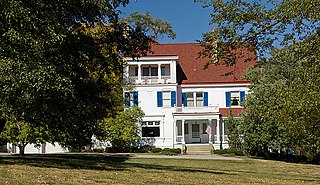 The William Stearns House is a historic residence in the city of Wyoming, Ohio, United States, near Cincinnati. Built at the turn of the twentieth century, it was the home of a business baron, and it has been designated a historic site.

The John Tangeman House is a historic house in the city of Wyoming, Ohio, United States. The city's best house of its style, the residence was once home to a prosperous factory owner, and it has been named a historic site.

Twin Oaks, also known as the "Robert Reily House", is a historically significant residence in the city of Wyoming, located near Cincinnati in the southwestern corner of the U.S. state of Ohio. Constructed in the middle of the nineteenth century, it was the home of Robert Reily, one of the leading citizens of early Wyoming. Its heavy stone architecture features a mix of two important architectural styles of the period, and it has been named a historic site.

The James D. Conrey House is a historic house located on an old intercity road in southeastern Butler County, Ohio, United States. Although the identification is unclear, it may have once been a tavern on the road, which connects Cincinnati and Columbus. A well-preserved piece of the road's built environment, it has been designated a historic site.

Anderson Schoolhouse is a registered historic building near Ashland, Ohio, listed in the National Register of Historic Places on 1977-03-25. It is located at 1202 US 42 South, in Milton Township, Ashland County, Ohio. It was known as the No. 5 district out of seven in the township.

The Masonic Temple in Kent, Ohio is a historic building which is listed on the National Register of Historic Places. Built between 1880 and 1882 in the Italianate style, it was originally the home of Kent namesake Marvin Kent and his family. Construction was performed partially by locals and partly by master craftsmen from afar: the architect was Isaac Tuttle of neighboring Ravenna, but interior woodworking was performed by woodworkers brought from New York City. Members of Kent's family lived at the house for slightly more than forty years before selling it to a Masonic lodge in 1923. Due to Marvin Kent's national prominence in the Republican Party, many political leaders visited his house, including Presidents Benjamin Harrison, William McKinley, William Howard Taft, and Warren G. Harding; the guest room in which every president slept has been named the "President's Room" and preserved in its late nineteenth-century condition.

The Skinner-Tinkham House, commonly known as the Barre Center Tavern, is located at Maple Street and Oak Orchard Road in Barre Center, New York, United States. It is a brick house in the Federal style built around 1830. It was renovated after the Civil War, which brought some Italianate touches to it.

The Zweig Building is a historic commercial building in downtown Bellaire, Ohio, United States. Constructed in 1912, it is an early example of the Chicago school. Constructed of brick, the building sits on a stone foundation and is covered with an asphalt roof. Four stories tall, the facade is four bays wide and the side eight bays wide, with two windows in each bay on each floor. Prominent pilasters separating the bays, in which are placed glass display windows on the first floor, both front and side. To the rear, part of the basement is exposed, due to sloping ground. The Windsor Hotel, established to serve travellers on the Pennsylvania Railroad, was formerly located behind the Zweig. During the early twentieth century, the building was used by small businesses, such as dentists and jewellers.

The Joseph Kirkwood House is a historic house in the village of Bridgeport, Ohio, United States. Originally home to one of the area's oldest families, it was built in the middle of the nineteenth century in a mix of architectural styles. Named a historic site in the 1980s, it has been converted into a health care facility.

The Berea Union Depot is a train station in Berea, Ohio, United States, which was built in 1876. As the railroad facilities through town grew, there was a demand in the early 1870s by developers and townspeople for a new passenger and freight station. When it was dedicated on May 3, 1876, The Plain Dealer called it "the finest facility outside the big cities." As a union station, it served the Lake Shore and Michigan Southern Railway and the Cleveland, Cincinnati, Chicago and St. Louis Railway, both of which became part of New York Central Railroad. It ceased to serve as a railway depot in 1954. In 1980, the building was restored as a restaurant and gathering place. 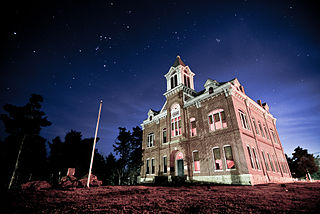 Powhatan Historic State Park is a 9.1-acre (3.7 ha) Arkansas state park in Lawrence County, Arkansas in the United States. The park contains the 1888 Powhatan courthouse which served as the home of county government from 1869-1968. Today the structure displays items of cultural and historical significance and hosts the park's Visitor Center. The park includes four additional historical buildings and the Arkansas History Commission's Northeast Arkansas Regional Archives. A tour of the historic structures is available. Powhatan served as an important stop for traffic on the Black River until the installation of the Kansas City-Memphis Railwayline two miles north in 1883 significantly decreased the need for river transportation. 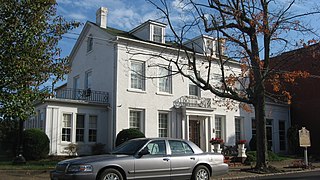 The John Downing Jr. House is a historic house in downtown Middleport, a village located on the banks of the Ohio River in the southeastern part of the U.S. state of Ohio. Built in 1859, it was the home of prominent Middleport resident John B. Downing. Known to his intimates as "Major" Downing, he worked for much of his life as a pilot for riverboats on the Mississippi River. Notably, his work with the young Samuel Clemens led to a literary appearance years later: writing under the name of "Mark Twain", Clemens portrayed him in the book Life on the Mississippi. One of his two sons, John B. Jr., was the house's namesake

The Ohio House, or Ohio State Building, is a historic building located in west Fairmount Park, Philadelphia. The house was built from various Ohio sandstones and functioned as the Ohio state exhibit for the Centennial Exposition of 1876. The only other extant exposition structures are Memorial Hall and two small comfort stations; the building is the only extant state exhibit remaining from the exposition. The house was restored for the Bicentennial Celebration in 1976, and leased to Ohio House Partners by the Fairmount Park Historic Preservation Trust in 2006. After extensive restoration, the building was opened to the public in November 2007 and has since functioned as a cafe, event venue and offices.