The Belmont Historic District is located in Belmont, Ohio and contains several streets. The buildings located in the district are primarily from the 19th century, but are punctuated by more recent buildings. The district is split by SR 147 and SR 149. The historic district was placed on the National Register in 1987. [1]

Belmont County is a county in the U.S. state of Ohio. As of the 2010 United States Census, the population was 70,400. Its county seat is St. Clairsville. The county was created on September 7, 1801 and organized on November 7, 1801. It takes its name from the French for "beautiful mountain".

Belmont is a ghost town in Nye County, Nevada, United States along former State Route 82. The town is a historic district listed in the National Register of Historic Places. It is Nevada Historical Marker number 138. 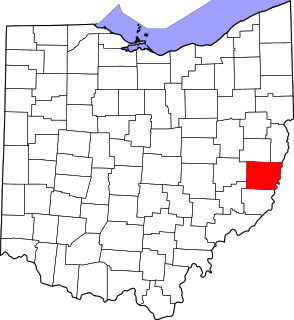 The Perry Belmont House, sometimes referred to as the International Temple of the Order of the Eastern Star, though there are no ritual or ceremonial spaces in the building, is the world headquarters of the General Grand Chapter of the Order of the Eastern Star, one of several organizations affiliated with Freemasonry. The building is located at 1618 New Hampshire Avenue, Northwest in the Dupont Circle neighborhood of Washington, D.C. The International Temple was added to the National Register of Historic Places on May 8, 1973.

The St. Clairsville Historic District is located in downtown St. Clairsville, Ohio, United States. The historic district contains buildings built during the Victorian era. The Belmont County Courthouse, St. Clairsville Municipal Building, and the Clarendon Hotel are some of the most notable buildings in the district. The district was placed on the National Register of Historic Places on 1994-03-17.

The Miami County Courthouse is an historic building in Troy, Ohio, United States. Built in 1885, it was designed by noted Ohio architect Joseph W. Yost, who also designed the similar Belmont County Courthouse built at the same time in St. Clairsville. It has high arched windows and Corinthian columns supporting the outthrust corners and main entrance. A flight of stairs runs to the main entrance. The central pediment rests on an arch supported by Corinthian columns. The corners of the building thrust out and support a pediment, on top of each rests a tower crowned with an urn-shaped finial. A central tower rises from the middle of the building supporting the clock tower and dome, a statue of justice stand at the very top.

Joseph Warren Yost (1847–1923) was a prominent architect from Ohio whose works included many courthouses and other public buildings. Some of his most productive years were spent as a member of the Yost and Packard partnership with Frank Packard. Later in his career he joined Albert D'Oench at the New York City based firm D'Oench & Yost. A number of his works are listed for their architecture in the U.S. National Register of Historic Places (NRHP).

The Barnesville Historic District consists of the oldest part of Barnesville, Ohio, originally platted in 1808 and contains roughly 40 acres and 180 buildings. The district was added to the National Register on July 19, 1984.

The James Kinney Farmstead, also known as Country Mile Farm, is located 4 miles (6.4 km) southeast of Belmont, Ohio on SR 147. The 57-acre (23 ha) property was placed on the National Register on 1999-04-29 and is only one of four farmsteads placed on the Register.

The Joseph Kirkwood House is a historic house in the village of Bridgeport, Ohio, United States. Originally home to one of the area's oldest families, it was built in the middle of the nineteenth century in a mix of architectural styles. Named a historic site in the 1980s, it has been converted into a health care facility.

The Grant Birthplace in Point Pleasant, Monroe Township, Ohio was the birthplace of U.S. President Ulysses S. Grant, who was born there in 1822. The home was built in 1817, and in 1821 Jesse Root Grant wed Hannah Simpson Grant and they moved into the home where they paid $2 a month rent. The future president lived in Point Pleasant for less than a year, as his family moved to Georgetown one month before his first birthday.

The Concord Hicksite Friends Meeting House is a historic Friends meeting house located near the community of Colerain, Ohio, United States. Constructed in 1815 for a group formed in 1801, it has been named a historic site.

Belmont Charter School is a historic school building located in the Belmont neighborhood of Philadelphia, Pennsylvania. The building was designed by Irwin T. Catharine and built in 1927. It is a three-story, brick building on a raised basement in the Late Gothic Revival-style. It features a two-story, projecting stone bay window over the main entrance.

The Belmont City Hall, also known as the Former United States Post Office, is a historic post office building located in Belmont, Gaston County, North Carolina. It was designed by the Treasury Department's Office of the Supervising Architect under the direction of Louis A. Simon, and built in 1939. It is a one-story, five bay Colonial Revival style brick building. At the rear is a stepped-back rectangular secondary block and loading dock. It housed the Belmont post office until 1970, then was converted for use as the Belmont City Hall in 1973. 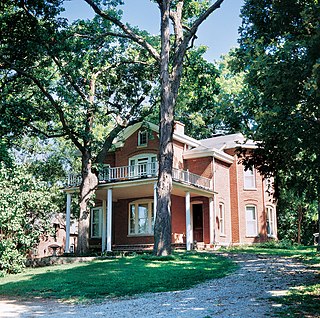 The Philip A. Wolff House and Carriage House, also known as Belmont Hill, is a historic building located in Cedar Rapids, Iowa, United States. An Ohio native, Wolff lived in several states and the West Indies before settling in Maquoketa, Iowa. He moved to Cedar Rapids where he established a brickworks with his son. Wolff had this two-story vernacular Italianate house and accompanying carriage house built in 1883 with bricks made at his business, which was on the same grounds. At the time it was built, the house was located in a suburban area of Cedar Rapids. This was during a period of economic growth for the city. The house features paired brackets under the eaves, the windows have brick arches above and limestone sills, a three-sided, two-story bay, and a projecting center pavilion. The carriage house is architecturally similar to the main house. They were listed together on the National Register of Historic Places in 1982.