Rock Hill Presbyterian Church is located at 52644 High Ridge Road in Bellaire, Ohio. The building was placed on the National Register on 2009-02-18.

The Presbyterian's first built a church on the site in the 1800s to house their congregation. It was a simple structure compared to the current one. The first church was destroyed by fire in 1895. The congregation began planning a larger, more elaborate church soon after but nothing was constructed until 1903. [2] The current building, which is still used today, was built in 1903 and was designed by Belmont County native George D. Giffin, whose father, Hugh Giffin, worshipped with the Rock Hill Presbyterian Church. The building cost $13,000 to produce.

The church is constructed of red brick with white wooden trim around the doors and windows. The church is designed in the shape of a cross with various entrances jutting from the basic form. The large hipped roof is supported by an entablature with dentil molding. Two large chimneys jut from the roofs along the northern and southern wings. The entrance is located in the large bell tower at the front of the building. The tower contains four pairs of arched openings supporting a large spire. A large bell hangs from a mounting in the tower.

The interior is illuminated by large stained glass windows, which are protected by a second plain window. The interior floor plan was designed in an auditorium style layout. The original oak pews are arranged in concentric arches to let people better hear and see the preacher.

Basilica of Our Lady of the Immaculate Conception is a Roman Catholic minor basilica and parish church in Guelph, Ontario, Canada. A Gothic Revival style building constructed between 1876 and 1888 by architect Joseph Connolly, it is considered Connolly's best work. The monumental church contains decorative carving and stained glass executed by skilled craftsmen. The church of Our Lady is one of the 122 parishes in the Diocese of Hamilton and currently has 2,600 families in the congregation.

Walnut Hills United Presbyterian Church is a historic church tower in the Walnut Hills neighborhood of Cincinnati, Ohio, United States. The last remnant of a landmark church building, it was designed by a leading Cincinnati architect and built in the 1880s. Although named a historic site a century after its construction, the building was mostly destroyed after extensive neglect caused restoration to become prohibitively expensive.

The former First Baptist Church is a historic Baptist church building located at 8601 Woodward Avenue in Detroit, Michigan. Built in 1909, it was designed by architect Guy J. Vinton in the Late Gothic Revival style. It is now the Peoples Community Church. The building was added to the National Register of Historic Places on August 3, 1982. 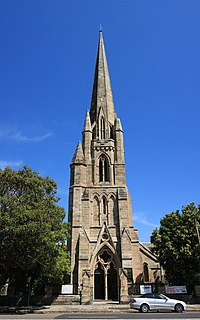 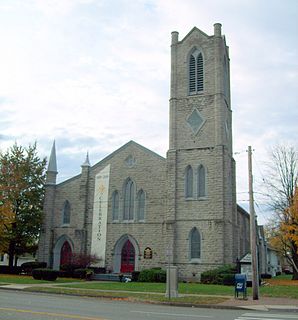 The First Presbyterian Church in Batavia, New York, United States, is located at East Main and Liberty streets. It is a joined complex of several buildings. The main one, the church's sanctuary, is a limestone Gothic Revival structure built in the mid-19th century. Its congregation was the first church to be organized in Batavia, albeit as a Congregationalist group at that time.

The Gray Memorial United Methodist Church and Parsonage is a historic church complex at 8 Prospect Street in Caribou, Maine. The Gothic Revival wood-frame church, built in 1912-14 for a Methodist congregation founded in 1860, is the most architecturally sophisticated church in Caribou. It was built on the lot of the Colonial Revival parsonage house, which was moved to make way for the church. The complex was listed on the National Register of Historic Places in 1995. The current pastor is Rev. Timothy Wilcox. 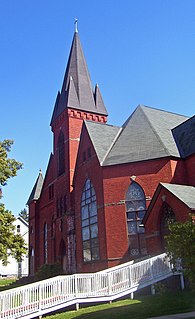 The Historic Walden United Methodist Church is located on West Main Street in Walden, New York, United States. It was desanctified in 2013 and sold by the congregation on November 24, 2014. The current location is at 1206 New York State Route 52, Walden, New York, United States. Ground was broken on a new House of Worship in September 2019 and is scheduled for completion in the spring of 2020.

St Andrews Uniting Church is a heritage-listed church at 131 Creek Street, Brisbane CBD, City of Brisbane, Queensland, Australia. It was designed by George David Payne and built in 1905 by Alexander Lind & Son. Initially St Andrews Presbyterian Church, it became part of the Uniting Church following the merger of the Presbyterian, Methodist and Congregational Churches in 1977. It was added to the Queensland Heritage Register on 21 October 1992.

St James Cathedral is a heritage-listed cathedral of the Anglican Diocese of North Queensland at 36 Cleveland Terrace, Townsville, City of Townsville, Queensland, Australia. It was designed by Arthur Blacket and was built in 1887 by MacMahon & Cliffe. It was added to the Queensland Heritage Register on 21 October 1992. 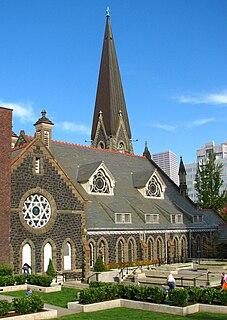 The First Presbyterian Church is a church building located in downtown Portland, Oregon, that is listed on the National Register of Historic Places. Construction began in 1886 and was completed in 1890. The building has been called "one of the finest examples" of High Victorian Gothic architecture in the state of Oregon. It includes stained-glass windows made by Portland's Povey Brothers Art Glass Works and a church bell cast with bronze from captured Civil War cannons.

Lake Shore Chapel is a historic chapel on Shorewood Road at the junction with Campbell Road in Douglas, Michigan. It was built in 1904 and added to the National Register in 1997.

The First Presbyterian Church is a historic church at 6505 Church Street in Cass City, Michigan. It was built in 1907 and added to the National Register in 2006. 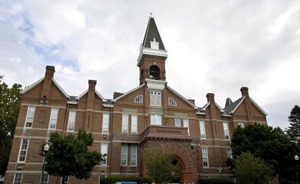 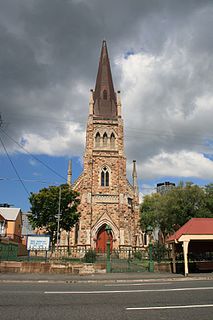 St Paul's Presbyterian Church is a heritage-listed church at 43 St Pauls Terrace, Spring Hill, City of Brisbane, Queensland, Australia. It was designed by Francis Drummond Greville Stanley and built from 1887 to 1889 by Thomas Rees. It was added to the Queensland Heritage Register on 21 October 1992. 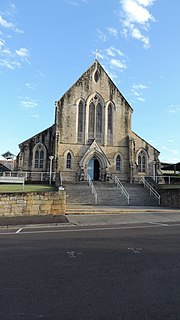 St Patrick's Roman Catholic Church is a heritage-listed church at Church Street, Gympie, Gympie Region, Queensland, Australia. It was designed by Francis Drummond Greville Stanley and built from 1883 to 1935. It was added to the Queensland Heritage Register on 20 February 1995. 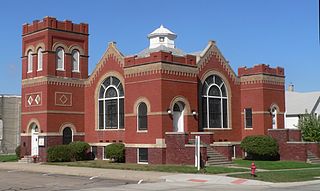 The Historic Presbyterian Community Center, formerly the First Presbyterian Church, is a former church building in the city of Madison, in the northeastern part of the state of Nebraska, in the Midwestern United States.

St Andrew's Presbyterian Church is a heritage-listed church at 280 Bolsover Street, Rockhampton, Rockhampton Region, Queensland, Australia. It was designed by Voller & Graham built from 1893 to 1926. It was added to the Queensland Heritage Register on 21 October 1992.