A thread gauge, [1] also known as a screw gauge [2] or pitch gauge, [3] is used to measure the pitch or lead of a screw thread.

Thread pitch gauges are used as a reference tool in determining the pitch of a thread that is on a screw or in a tapped hole. This tool is not used as a precision measuring instrument, rather it allows the user to determine the profile of the given thread and quickly categorize the thread by shape and pitch. This device also saves time, in that it removes the need for the user to measure and calculate the pitch of the threaded item.

To use a thread gauge, the user must first match the type of thread to the gauge. For example, attempting to measure metric threads with an imperial gauge will not return accurate results. To determine the correct gauge, sex of trial and error may be needed if the screw is of unknown origin.

Standardization or standardisation is the process of implementing and developing technical standards based on the consensus of different parties that include firms, users, interest groups, standards organizations and governments. Standardization can help maximize compatibility, interoperability, safety, repeatability, or quality. It can also facilitate commoditization of formerly custom processes. In social sciences, including economics, the idea of standardization is close to the solution for a coordination problem, a situation in which all parties can realize mutual gains, but only by making mutually consistent decisions. This view includes the case of "spontaneous standardization processes", to produce de facto standards. 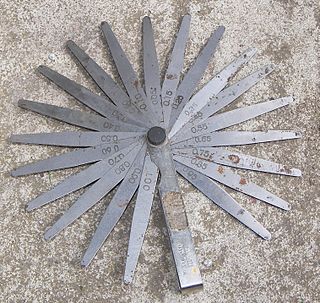 A feeler gauge is a tool used to measure gap widths. Feeler gauges are mostly used in engineering to measure the clearance between two parts. 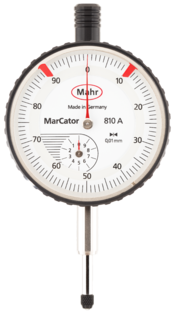 A bore gauge is a collective term for the tools that are unique to the process of accurately measuring holes.

Gauge blocks are a system for producing precision lengths. The individual gauge block is a metal or ceramic block that has been precision ground and lapped to a specific thickness. Gauge blocks come in sets of blocks with a range of standard lengths. In use, the blocks are stacked to make up a desired length.

A drawbar force gauge is a gauge designed to measure forces on a machine tool's drawbar. These types of machines are found in metalworking, woodworking, stone cutting, and carbon fiber fabricating shops. Many modern machines generate well in excess of 50,000 N (12,000 lbf). Measuring and maintaining this force is an important and necessary part of a machine shop preventative maintenance plan.

A bolt is a form of threaded fastener with an external male thread. Bolts are very closely related to screws.