Tianjin FAW (officially Tianjin FAW Xiali Automobile Co., Ltd.) is an automobile company based in Tianjin, China and a subsidiary of FAW Group. Its principal activity is the design, development, manufacture and distribution of automobiles sold under the Xiali and Vita marques. It is listed on the Shenzhen Stock Exchange.

Tianjin FAW was founded in 1965 and was originally considered one of the "three smalls" of the Chinese automotive industry, together with Guangzhou Honda and Beijing. [2] Tianjin FAW moved into third place in the Chinese market in 1997. [3] By 2000 they were in second place, in spite of the low quality of their products. [4] Production volumes were high due to the fact that many towns used Xiali cars as taxicabs. Many of the smaller towns in rural China had Xiali cars as taxicabs well into the second decade of the twenty-first century. Xiali parts were cheap and it was one of the cheapest cars to run in China. Due to their low running costs, Xiali cars in many towns survived as unofficial "black" taxies till well after they were replaced by other cars as legal taxies. Tianjin FAW has since lost market share to several new Chinese automobile manufacturers.

Tianjin FAW's first product, debuting in 1965, was a copy of the famous Beijing Jeep called the Tianjin TJ210. Between 1973 and 1979 the Toyota look-alike Tianjin TJ740 was also built, although only 63 were finished.

In the 1980s, Tianjin's directors decided to look abroad for a joint venture to enable them to build modern small cars. In 1983, Daihatsu had been chosen as a partner, and in November 1984 the first vehicle rolled out from the works. At first, local parts content was a mere 8%, but this had jumped to 85% by the end of 1987. The first product was a locally built Daihatsu Hijet in 1984, followed by the Charade which began local assembly in 1986. [2]

Before the Toyota joint venture, Tianjin FAW produced the Tianjin Xiali TJ730 (based on the 1983 Daihatsu Charade) and then the TJ7100-TJ7131 hatchback and TJ7100U-TJ7131U sedan under the Xiali brand that was formed in August 1997. Xiali (夏利) is Chinese for "Charade". The TJ7100-series cars, based on the 1987 Charade. They were very popular in China as taxicabs throughout the 1980s and in the 1990s, the Chinese Volkswagen Jetta joined the taxi market followed by the Hyundai Sonata and Elantra in the 2000s. The Xiali taxi was retired from the taxi market in February 2006 in an effort to cut down pollution.

Production of the Daihatsu-based Xiali N3 ran from 2004 to 2012. Production at the Tianjin Xiali plant had shifted to more modern Toyota vehicles, for example the Xiali 2000 that was based on the Toyota Platz/Vitz but the production of the much cheaper Xiali outlived the Xiali 2000. Toyota also builds and sells vehicles in China under its own brand.

The Xiali brand was discontinued in 2015 and was replaced by the new brand called Junpai.

FAW Tianjin also produces the Miles ZX40, an electric version of the Daihatsu Move which became the first Chinese-built vehicle sold in the United States when it was offered in mid-2006 by Miles Automotive Group.

The Toyota Vitz is a subcompact car produced by the Japanese automobile manufacturer Toyota from 1999 to 2019 in a three- or five-door hatchback body styles. The "Vitz" nameplate was used consistently in Japan, while most international markets received the same vehicle as the Toyota Yaris, or as the Toyota Echo in some markets for the first generation. The Vitz was available in Japan from Toyota's Netz Store dealerships. Toyota began production in Japan and later assembled the vehicle in other Asian countries and in France. 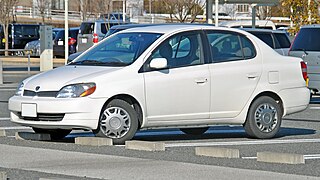 The Toyota Platz is a subcompact car that was manufactured in Japan by Toyota from 1999 until 2005, when it was replaced by the Belta. Designated by Toyota as the XP10 series, the Platz was also sold in export markets as either the Toyota Yaris or Toyota Echo. The "Yaris" and "Echo" names were also given to the export version of the related Japanese market Vitz hatchback, from which the Platz derives. In Japan, it was only available at the Toyopet Store dealerships. 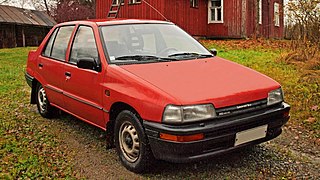 The Daihatsu Charade is a supermini car produced by the Japanese manufacturer Daihatsu from 1977 to 2000. It is considered by Daihatsu as a "large compact" or "supermini" car, to differentiate it from the smaller kei car compacts in its line-up, such as the Daihatsu Mira. In Japan, it offers buyers more interior space and a larger engine that allows for the car to also be used outside of urban areas. It replaced the Daihatsu Consorte, although the Charmant took over from the bigger-engined Consortes, and didn't share a platform with a Toyota product.

The Daihatsu Consorte is a small sedan sold by the Japanese automaker Daihatsu from 1969 to 1977. It was based on the Toyota Publica, and its name, meaning "consort" in Italian, reflected Daihatsu's newly established affiliation with Toyota. It replaced the Compagno as Daihatsu's passenger vehicle. The Consorte was derived from Toyota's Publica and was sold at a newly established Japanese dealership network intended to exclusively sell the Publica. This was called Toyota Publica Store until 1966 when it was renamed Toyota Corolla Store to sell the all-new Toyota Corolla. This arrangement allowed Toyota to sell the Publica at recently acquired Daihatsu dealerships, giving Daihatsu a car larger than kei class cars. The Consorte used a Daihatsu developed engine, while the Publica used a two-cylinder, air-cooled, flat-2 U engine.

The Toyota Tercel is a subcompact car manufactured by Toyota from 1978 until 1999 across five generations, in five body configurations sized between the Corolla and the Starlet. Manufactured at the Takaoka plant in Toyota City, Japan, and sharing its platform with the Cynos and the Starlet, the Tercel was marketed variously as the Toyota Corolla II — sold at Toyota Japanese dealerships called Toyota Corolla Stores — and was replaced by the Platz in 1999. It was also known as the Toyota Corsa and sold at Toyopet Store locations. Starting with the second generation, the Tercel dealership network was changed to Vista Store, as its badge engineered sibling, the Corolla II, was exclusive to Corolla Store locations.

China FAW Group Corp., Ltd. is a Chinese state-owned automobile manufacturer headquartered in Changchun, Jilin. Founded in 1953, it is currently the second largest of the "Big Four" state-owned car manufacturers of China, together with SAIC Motor, Dongfeng Motor Corporation and Changan Automobile. 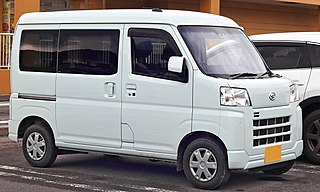 The Daihatsu Hijet is a cab over microvan and kei truck produced and sold by the Japanese automaker Daihatsu since 1960. Despite the similarities between the Hijet name and Toyota's naming scheme for its trucks and vans, the name "Hijet" has been in use for Daihatsu's kei trucks and microvans since 1960, over two decades before Toyota took control. "Hijet", when transliterated into Japanese, is very similar to "Midget", one of Daihatsu's other mini-trucks. According to Daihatsu, the name "Hijet" was created to imply that the vehicle offers higher performance than the Midget. The Hijet competes in Japan with the Honda Acty, Mitsubishi Minicab, Nissan Clipper, Subaru Sambar and Suzuki Carry. 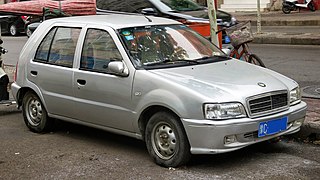 The Geely HQ is a subcompact hatchback from Chinese manufacturer, Geely Automobile. 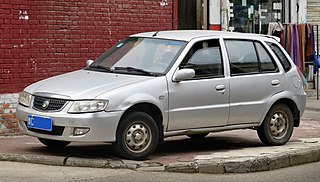 The Geely Merrie is a subcompact car produced by Chinese automaker Geely Automobile from 2003 to 2006. The MR is produced in five-door hatchback and four-door sedan body styles. 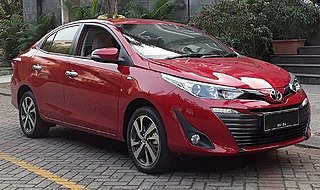 The Toyota Vios is a nameplate used for subcompact cars produced by the Japanese manufacturer Toyota, primarily for markets in Southeast Asia, China and Taiwan since 2002. Slotted below the compact Corolla, the Vios serves as the replacement to the Tercel, which filled the subcompact or B-segment sedan class in the region. It is also successor to the entry-level variants of the E110 series Corolla in some markets such as the Philippines and Vietnam. 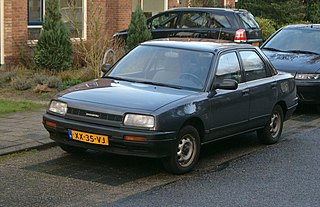 The Daihatsu Applause is a compact car manufactured by the Japanese automaker Daihatsu from 1989 to 2000. It is most notable for its unusual body style, which, despite appearing to be a 4-door notchback sedan, is in fact a 5-door liftback with a notchback-shaped 412-litre trunk and a tailgate.

FAW Haima Automobile Co., Ltd., trading as Haima, is a Chinese automotive manufacturing company based in Haikou, Hainan and a subsidiary of FAW Group. Its principal activity is production of passenger cars for other companies.

The Chery A13, also known as Fulwin 2, is a subcompact car manufactured by the Chinese automaker Chery. It is the successor of the A15 (Cowin) in the Chery lineup. The car was presented for the first time at the 2008 Beijing Auto Show. A facelifted version was introduced at the 2012 Guangzhou Motor Show.

The BYD G3 is a compact car by BYD. It is essentially an enlarged version of the BYD's compact car BYD F3, first introduced in October 2009.

The XP150 series Toyota Yaris is a subcompact car produced and sold by Toyota under the Yaris nameplate since 2013. Marketed exclusively for emerging markets, it is the hatchback counterpart of the XP150 series Vios subcompact sedan, which in some markets also shared the same Yaris nameplate. It is larger and longer than the unrelated XP130 series Yaris hatchback which was marketed in Japan, North America, Europe and Australasia, and the succeeding TNGA-based XP210 series Yaris.

The Toyota Corolla (E210) is the twelfth generation of the Corolla, a compact car (C-segment) manufactured by Toyota. Introduced in 2018, this generation has also grown to include hatchback and estate configurations in addition to the saloon (sedan). 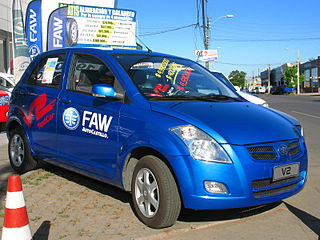 The FAW Weizhi V2 (天津一汽-威志V2) or FAW Vizi V2 is a subcompact hatchback produced by FAW Group under the FAW Tianjin brand. A sedan version was also planned, but was never produced before the brand was discontinued. 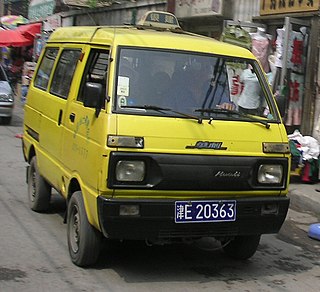 The Huali Dafa is a three-cylinder microvan under the Huali product series produced by FAW Tianjin, a member of First Automobile Works Group in the People's Republic of China since being introduced in 1984. Dafa translates to Daihatsu in Chinese which means that it is a rebadged Daihatsu model.

The FAW Vita (天津一汽-威志) or FAW Weizhi is a subcompact sedan and hatchback produced by FAW Group under the FAW Tianjin brand from July 2006 to 2011.

The Xiali N5 is a subcompact sedan produced by the Chinese automotive manufacturer FAW Group under the Xiali brand.