Since 10 March 2008, Sinotruk (Hong Kong) became a constituent of Hang Seng China-Affiliated Corporations Index, [4] a stock market index for red chip companies. The stock was removed from the index on 4 June 2012 and re-instated on 7 September 2020. [5]

Sinotruk manufactures cargo trucks and semi-tractor trucks that are used in a range of industries including construction, container transportation, mining and steel production (Howo and Sitrak).

Fuel-efficient trucks currently account for about 80 per cent of the company's production.

From 2010 to 2014, Sinotruk exported civilian trucks to North Korea which were converted to military use. Sinotruk denied any wrongdoing in the transaction. [6] 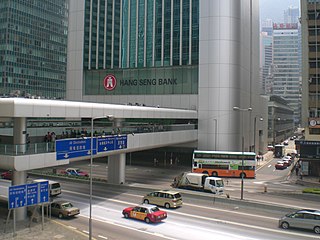 Hang Seng Bank Limited is a Hong Kong-based banking and financial services company with headquarters in Central, Hong Kong. It is one of Hong Kong's leading public companies in terms of market capitalisation and is part of the HSBC Group, which holds a majority equity interest in the bank. 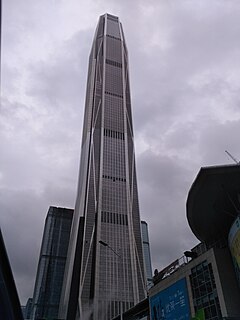 Ping An Insurance known also as Ping An of China, full name Ping An Insurance (Group) Company of China, Ltd. is a Chinese holding conglomerate whose subsidiaries mainly deal with insurance, banking, asset management, financial services, healthcare, auto services and smartcity. The company was founded in 1988 and is headquartered in Shenzhen. "Ping An" literally means "safe and well". 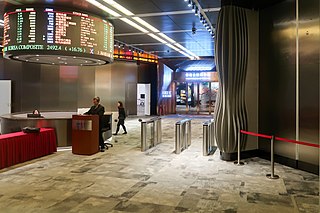 Hang Seng China-Affiliated Corporations Index or HSCACI is a stock index of the Stock Exchange of Hong Kong for red chip companies listed on the exchange, which are incorporated outside of mainland China, such as in Bermuda, the Cayman Islands, or Hong Kong, but are majority-owned by the central or regional government of the People's Republic of China.

China Resources Enterprise is the subsidiary and the listed company of China Resources Holdings. It is a conglomerate enterprise focusing on retailing, beverage, food processing and distribution, textiles and real estate in Hong Kong and Mainland China. Its assets include a 51% share in CR Snow, the largest brewing company in China and a joint venture with SAB Miller.

Huaneng Power International, Inc. (HPI), commonly known as Huaneng Power, is a Chinese electric power company. It was established in 1994 by the China Huaneng Group, one of the five largest power producers in China. It engages in the development, construction and operation of large power plants.

Huadian Power International Corporation, formerly Shandong International Power Development Company Limited, is the largest power producer in Shandong Province, China, and is the Hong Kong listed subsidiary of China Huadian, one of the five largest power producers in China. The parent company produces about 10% of China's power, and the subsidiary produces approximately another 5%.

China Resources Power Holdings Company Limited was incorporated and registered in Hong Kong in 2001. It is a subsidiary of China Resources Holdings, a conglomerate in Mainland China and Hong Kong. Its business is concerned about the investment, development, operation and management of coal-burning power plants in the regions including Beijing, Hebei, Henan, Liaoning, Shandong, Jiangsu, Anhui, Zhejiang, Hubei, Hunan, Guangdong and Yunnan.

China Jinmao Holdings Group Limited, the subsidiary of state-owned Sinochem Corporation, is engaged in real estate development in Shanghai, Beijing and Zhuhai. It is incorporated and headquartered in Hong Kong, but its business is mainly in Mainland China. The formerly name was "Franshion Properties (China) Limited".

China Everbright Bank Co., Ltd. is one of twelve Chinese joint-stock commercial bank. Established in August 1992, it is a national joint-stock commercial bank approved by the State Council and approved by the People's Bank of China, headquartered in Beijing. It was ranked in 139th in 2016 Forbes Global 2000 publicly held companies. Sister company Everbright Securities ranked 862th.

Zhuzhou CRRC Times Electric Co. Ltd., abbreviated as TEC, is a Chinese train manufacturer. It is headquartered in Zhuzhou, Hunan Province. The company is a prominent maker of traction systems for locomotives and for electric multiple units (“EMU”) and urban transit train applications, which generates about 70 percent of the company's total sales.

Hang Seng China Enterprises Index is a stock market index of The Stock Exchange of Hong Kong for H share only. H share is a class of ordinary share of the mainland China incorporated company that only traded outside the mainland China; all of these companies were majority owned by the central or regional Chinese government. In contrast, civilian-run enterprises of the mainland China listed their companies in Hong Kong using "foreign"-incorporated holding companies as P chip ; those using the same method but majority owned by the central or regional Chinese government, was known as red chip; red chip had their own separated index. 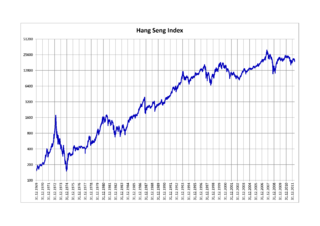 The Hang Seng Index (HSI) is a freefloat-adjusted market-capitalization-weighted stock-market index in Hong Kong. It is used to record and monitor daily changes of the largest companies of the Hong Kong stock market and is the main indicator of the overall market performance in Hong Kong. These 50 constituent companies represent about 58% of the capitalisation of the Hong Kong Stock Exchange.

Poly Property Group Co., Ltd., is a Hong Kong incorporated Chinese property developer, with its major businesses include property development, investment and management. It mainly develops mid to high-end residential and commercial properties in the cities along Yangtze River Delta and Pearl River Delta as well as the second-tier provincial capitals.

ENN Energy Holdings Limited is a company listed on the Hong Kong Stock Exchange. It is one of the four listed companies owned by ENN Group, one of the largest private energy groups in China. The other three are ENN Ecological Holdings, ENC Digital Technology Co.,Ltd and Tibet Tourism Co., Ltd..