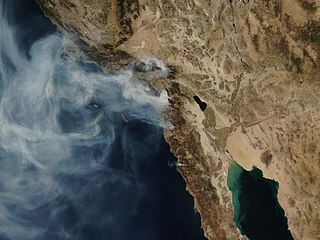 The 2007 California wildfire season saw at least 9,093 separate wildfires that charred 1,520,362 acres (6,152.69 km2) of land. Thirty of those wildfires were part of the Fall 2007 California firestorm, which burned approximately 972,147 acres of land from Santa Barbara County to the U.S.–Mexico border. At the peak of the wildfire activity in October 2007, the raging wildfires were visible from space. 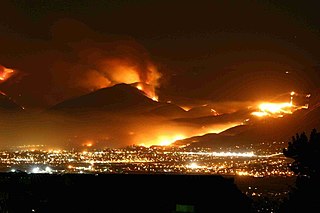 The Witch Creek Fire, also known as the Witch Fire and the Witch-Guejito–Poomacha Complex Fire, was the second-largest wildfire of the 2007 California wildfire season, and the largest one of the October 2007 California wildfires. Although the Witch Creek Fire was individually smaller than the Zaca Fire of 2007, burning 197,990 acres (801 km2) acres alone, after merging with the Poomacha and McCoy Fires, the Witch–Guejito–Poomacha Complex Fire had a total burn area of 247,800 acres (1,003 km2), surpassing the Zaca Fire to become the largest complex fire of 2007. Initially igniting in Witch Creek Canyon, near Santa Ysabel, the Witch Creek Fire rapidly spread westward, fanned by powerful Santa Ana winds, and consumed large portions of San Diego County. On October 25, the Witch Fire merged with the Poomacha Fire to the north, near Palomar Mountain, before also merging with the smaller McCoy Fire on the next day. The Witch–Poomacha Complex Fire was the second-to-last fire of the 2007 October wildfires to be extinguished, with the Poomacha Fire being contained on November 13. The last remaining fire, the Harris Fire, was fully extinguished on November 16. During its duration, 80–100 feet-high flames were reported by fire officials in the Witch Fire, and the Witch Fire exhibited the characteristics of a firestorm at its height. 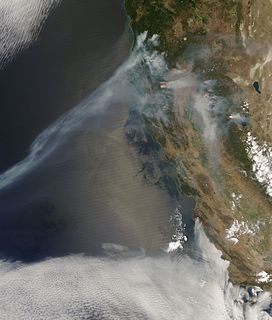 2014 saw several notable wildfires igniting in California, especially during the month of May, when multiple fires were ablaze concurrently in Southern California, and during September, when several massive wildfires were burning in Northern California. In the context of the 2012–13 North American drought, as well as powerful Santa Ana winds, weather conditions were ideal for wildfires. A total of 7,865 wildfires ignited throughout the year, which burned at least 625,540 acres (2,531.5 km2) of land. The wildfires caused a total of 146 injuries and 2 fatalities, in addition to causing at least $204.05 million in damage. 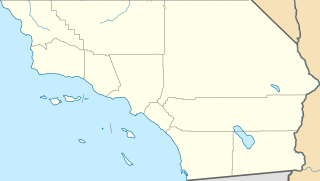 The Poinsettia Fire was the second most destructive of the May 2014 San Diego County wildfires. It caused property damage estimated at $22.5 million, as well as the only reported fatality in the San Diego County series of wildfires. As of July 10, 2014, the cause of the fire is listed as "undetermined", which allows for further investigation if more information comes to light. 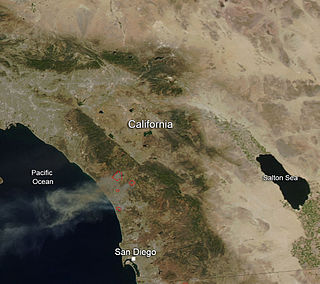 The May 2014 San Diego County wildfires were a swarm of 20 wildfires that erupted during May 2014, in San Diego County, California, during severe Santa Ana Wind conditions, historic drought conditions, and a heat wave. The main event during mid-May was preceded by a precursor fire that ignited on May 5. The Bernardo Fire has been declared accidental, and officials believe the Cocos Fire was intentionally set. The causes of the other fires are still under investigation by multiple agencies, and a joint task force was formed to coordinate the investigations and facilitate communications. Six injuries and one fire-related fatality were reported. 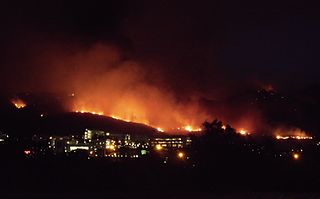 Cocos Fire, originally known as the Twin Oaks Fire, was a wildfire that ignited on May 14, 2014 in San Marcos, California, in the hills south of California State University, San Marcos. The Cocos Fire quickly spread into western Escondido. The fire destroyed more than 40 buildings, including a dozen single-family homes. The Harmony Grove Spiritualist Association, a 13-acre spiritualist retreat founded in 1896, was particularly hard hit; most of the buildings and residences on the property were destroyed, and the association's president said, "We're pretty much wiped out." Property damage from the fire is estimated at more than $5.7 million. Three minor injuries have been reported. The Cocos Fire was the last of the May 2014 wildfires in San Diego County to be extinguished, with full containment on May 22, 2014. 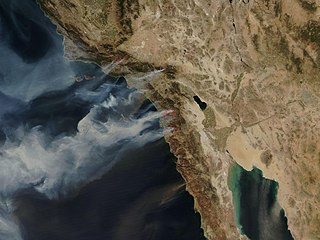 The October 2007 California wildfires, also known as the Fall 2007 California firestorm, were a series of about thirty wildfires that began igniting across Southern California on October 20. At least 1,500 homes were destroyed and approximately 972,147 acres of land was burned from Santa Barbara County to the U.S.–Mexico border, surpassing the October 2003 California wildfires in scope, which were estimated to have burned 800,000 acres (3,200 km2). The wildfires killed a total of 14 people, with nine of them dying directly from the fires; 160 others were injured, including at least 124 firefighters. At their height, the raging fires were visible from space. These fires included the vast majority of the largest and deadliest wildfires of the 2007 California wildfire season. The only wildfire in 2007 that surpassed any of the individual October 2007 fires in size was the Zaca Fire. 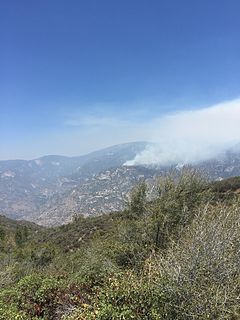 The Rough Fire was a devastating fire of the 2015 California wildfire season. The fire burned 151,623 acres (61,360 ha) of land, making it the largest fire of the year in California, involving up to 3,742 firefighters in the fire suppression efforts. 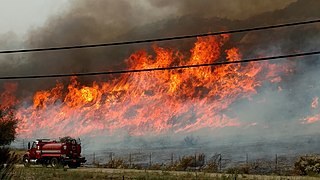 The Border Fire was a large wildfire that burned in Potrero, San Diego County, California, as part of the 2016 California wildfire season. The fire was so named due to its proximity to the United States-Mexican border. 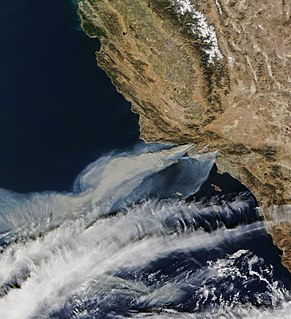 A series of 29 wildfires ignited across Southern California in December 2017. Six of the fires became significant wildfires, and led to widespread evacuations and property losses. The wildfires burned over 307,900 acres (1,246 km2), and caused traffic disruptions, school closures, hazardous air conditions, and power outages; over 230,000 people were forced to evacuate. The largest of the wildfires was the Thomas Fire, which grew to 281,893 acres (1,140.78 km2), and became the largest wildfire in modern California history, until it was surpassed by the Ranch Fire in the Mendocino Complex, in the following year. The Lilac Fire was a fire that burned in northern San Diego County, California, United States, and the second-costliest one of multiple wildfires that erupted in Southern California in December 2017. The fire was first reported on December 7, 2017, burned 4,100 acres (1,659 ha), and destroyed 157 structures, before it was fully contained on December 16. The fire cost at least $8.9 million, including $5 million in firefighting expenses and property damage, and an additional $3.9 million in cleanup and erosion control costs. The fire threatened the communities of Bonsall, Oceanside, Vista, Fallbrook, and Camp Pendleton. During the fire, an estimated 10,000 residents were forced to evacuate, while a total of over 100,000 residents were forced to or advised to evacuate. On December 7, the Lilac Fire also cut the power to 20,000 people. 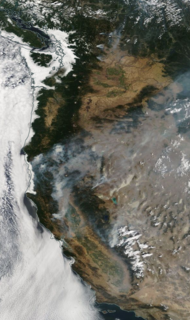 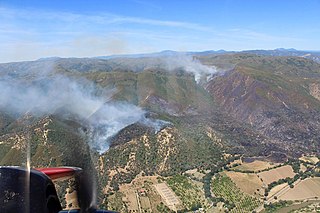 The Sand Fire was a wildfire that burned in the area of Rumsey northwest of Guinda in Yolo County, California in the United States. The fire started on Saturday, June 8, 2019 at County Road 41 and Highway 16 and burned 2,512 acres (1,017 ha) as well as seven structures. The fire was fully contained as of 7:27 am on June 15, 2019. The cause of the fire remains under investigation. The fire was the first major incident of the season, in what fire officials claimed to be an indicator of the fire season to come. 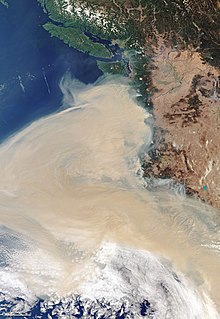 The 2020 California wildfire season, part of the 2020 Western United States wildfire season, was a record-setting year of wildfires in California. By the end of the year, 9,639 fires had burned 4,397,809 acres (1,779,730 ha), more than 4% of the state's roughly 100 million acres of land, making 2020 the largest wildfire season recorded in California's modern history, though roughly equivalent to the pre-1800 levels which averaged around 4.4 million acres yearly and up to 12 million in peak years. California's August Complex fire has been described as the first "gigafire", burning over 1 million acres across seven counties, an area larger than the state of Rhode Island. The fires destroyed over 10,000 structures and cost over $12.079 billion in damages, including over $10 billion in property damage and $2.079 billion in fire suppression costs. The intensity of the fire season has been attributed in part to over a century of poor forest management as well as increased warming due to climate change. 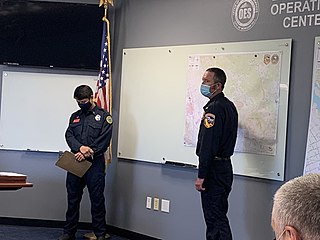 The Crews Fire was a wildfire that burned east of the city of Gilroy in Santa Clara County, California in the United States. The fire started on July 5, 2020. It burned 5,513 acres (2,231 ha) and was extinguished on July 13, 2020. Burning approximately three miles east of Highway 101, the fire caused the evacuation approximately 20 homes and 70 residents. One structure was destroyed, one was damaged, and one firefighter was injured. It threatened 30 structures and farm and ranch lands in southeast Gilroy in the San Juan Valley. Mandatory evacuations were ordered on July 5th, and they were lifted on July 8th. 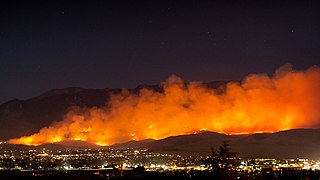 The Apple Fire was a wildfire that burned during the 2020 California wildfire season in Cherry Valley south of Oak Glen and north of Beaumont and Banning in Riverside County, California in the United States. The fire ignited on Friday, July 31, 2020 as three separate smaller blazes within the rural canyons along Oak Glen Road before merging and rapidly expanded to 1,900 acres (769 ha) and destroyed at least one home and two outbuildings in the Cherry Valley area. It now covers at least 33,424 acres (13,526 ha) and created "a plume of smoke so massive that it generated its own winds." The fire was sparked by a diesel-burning vehicle that emitted burning carbon. 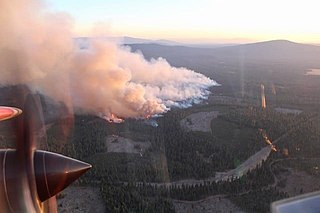 The 2020 Lassen County wildfires were a series of seven wildfires burning entirely, or partly in Lassen County. A total of 203,296 acres (82,271 ha) of land was burned in Lassen County, making one of the largest clusters of fires at that point in the 2020 California wildfire season.