Topaz is a cultivar of dessert apple that was developed in Czech Republic by the Institute of Experimental Botany for scab resistance. [1] According to Orange Pippin it is "one of the best modern disease-resistant varieties, with fairly sharp flavour". [2]

'Golden Delicious' is a yellow apple, one of the 15 most popular cultivars in the United States. It is not closely related to 'Red Delicious'.

Cox's Orange Pippin, in Britain often referred to simply as Cox, is an apple cultivar first grown in 1830, at Colnbrook in Buckinghamshire, England, by the retired brewer and horticulturist Richard Cox. Though the parentage of the cultivar is unknown, Ribston Pippin seems a likely candidate. Dr. Cameron Peace of WSU recently determined that one of the parents is Margil and since Ribston Pippin is a Triploid, it would not be a parent. The variety was introduced for sale by the 1850s by Charles Turner, and grown commercially from the 1860s, particularly in the Vale of Evesham in Worcestershire, and later in Kent. 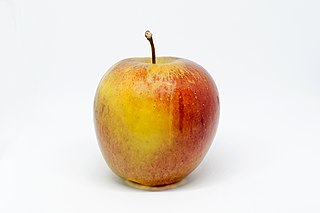 Jazz is a trademarked brand of the Scifresh cultivar of domesticated apple. Scifresh is a cross between Royal Gala and Braeburn. It was developed in New Zealand as part of a collaboration between apple marketer ENZA, orchardists, and the Plant & Food Research institute. The original cross was made in 1985 on trees at Goddard Lane, Havelock North, Hawkes Bay, New Zealand. It launched commercially in April 2004. It is hard and crisp but juicy. The colour is; flushes of red and maroon over shades of green, yellow and orange.

Blenheim Orange is a cultivar of apple. It was found at Woodstock, Oxfordshire near Blenheim in England in about 1740. It has been described as a cooking apple.

The 'Laxton's Superb' is an apple cultivar that was developed in England in 1897. It is a cross breed between 'Wyken Pippin' and 'Cox's Orange Pippin'. It is a British apple with a green color and a dull red flush. It is a firm-textured dessert apple. The fruit is well known for its sweet and aromatic taste which is likened to the parent species it is derived from, the 'Cox's Orange Pippin'.

Malus domestica Newton Wonder is a cultivar of apple which is usually eaten cooked due to its sourness. The variety has a similar but slightly sweeter taste than the Bramley apple and is usually used in pies or as a preserve.

Opal is the brand name for a cultivar of apple also known as 'UEB32642', produced by crossing 'Golden Delicious' with 'Topaz'. Developed by the Institute of Experimental Botany in Prague and FruitSelect in 1999, it is grown by FirstFruits Farms LLC in Washington and marketed by FirstFruits Marketing. It is also cultivated in Austria, the Netherlands, France and the United Kingdom. Opal is a variety registered with the Community Plant Variety Office of the European Union.

'Geheimrat Dr. Oldenburg' is a German apple cultivar. It was created in 1897 at the Höheren Lehranstalt für Obstbau of Geisenheim in the Rheingau by hybridisation of Minister von Hammerstein and Baumanns Renette. It may also be known as 'Geheimrat Doktor Oldenburg', 'Geheimrat Oldenburg', or simply 'Oldenburg'. It is a quite different apple from the older Russian cultivar 'Duchess of Oldenburg', also sometimes known simply as 'Oldenburg'.

The 'Sunset' is an apple cultivar derived from the Cox's Orange Pippin cultivar. Both are found in Great Britain. The fruit has red stripes and an orange flush over a gold background. Usually, part of the apple is red while part of it is yellow. It is similar to 'Cox's Orange Pippin' in that it displays some russetting. The 'Pixie' apple is a distant descendant. 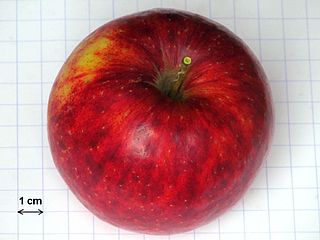 Rajka is a hybrid cultivar of domesticated apple from the Czech Republic, specifically for eating. Rajka was crossed and developed by the Institute of Experimental Botany from the Champion and Katka apples for scab resistance, hence possible to grow organic.

Orange Pippin is a website providing information on the different cultivars of apple, cherry and plums. It was established around 2005 by Richard Borrie, a database programmer who lives in England. Currently, it carries a listing of over 2000 apple orchards and 600 apple cultivars, and it is regarded as the most comprehensive resource for apple cultivars and orchards.

'Akane' also known as 'Tokyo Rose', 'Tohoku No.3' and 'Prime Red' is a Japanese cultivar of domesticated apple, that according to Orange Pippin is one of the best early season apples.

'Allington Pippin' is an English cultivar of domesticated apple, with a strong flavour that includes hints of pineapple. 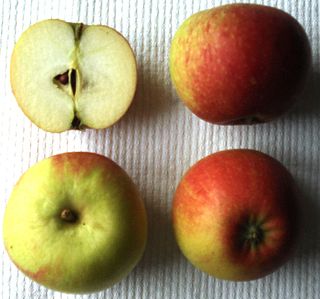 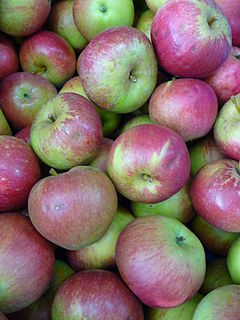 Fiesta is a modern cultivar of domesticated apple which is often marketed as Red Pippin. It was developed in the United Kingdom by breeders at the East Malling Research Station, combining the Cox's Orange Pippin with the Idared apple. According to the Orange Pippin website, it is one of the best Cox's style apples, but much easier to grow having good disease resistance. 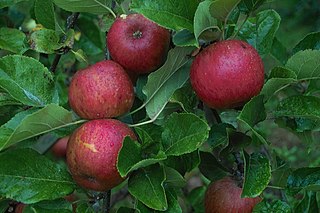 Ellison's Orange is an English cultivar of domesticated apple, an offspring of the famous Cox's Orange Pippin, which it resembles at most in looks and taste, but can develop a distinct aniseed flavor in storage. The variety is much more disease resistant than Cox's and therefore easier to cultivate.

Reinette du Canada or Canadian Reinette is, despite its name, an old French cultivar of domesticated apple. It is a reinette type of golden apple, with much russeting, which keeps shape in cooking and is mainly used for that purpose especially in apple strudel.

Jupiter is a modern cultivar of domesticated apple which was developed in England, by crossing a Cox's Orange Pippin with a Starking Delicious apple. According to the Orange Pippin website, it is one of the best Cox-style apples, with somewhat a more robust flavor, but more importantly, much more disease resistant. It is a heavy cropper and has a tendency to biennial bearing if not thinned. It is also frost resistant, and earned the Award of Garden Merit by the Royal Horticultural Society in 1993.

Flamenco, also known as Ballerina Obelisk, is a cultivar of domesticated apple that bears apples good for eating fresh, and is grown for its unusual ornamental properties. The tree grows in a straight up columnar style, with many small fruit-bearing branches. 'Flamenco' is one of a series of apple tree cultivars that share a registered trademark under the name Ballerina.

Melba is a Canadian cultivar of domesticated apple, which was developed by W. T. Macoun at the Central Experimental Farm, in Ottawa, Ontario by crossing a McIntosh with a Liveland Raspberry apple. It has a yellow skin washed with crimson colour. Flesh is extremely white, firm and crisp. Flavor is sweet with hints of tart. There is also a Red Melba mutation which is more red coloured, and is ripening later in season.