An underwater glider is a type of autonomous underwater vehicle (AUV) that employs variable-buoyancy propulsion instead of traditional propellers or thrusters. It employs variable buoyancy in a similar way to a profiling float, but unlike a float, which can move only up and down, an underwater glider is fitted with hydrofoils (underwater wings) that allow it to glide forward while descending through the water. At a certain depth, the glider switches to positive buoyancy to climb back up and forward, and the cycle is then repeated.

While not as fast as conventional AUVs, gliders offer significantly greater range and endurance compared to traditional AUVs, extending ocean sampling missions from hours to weeks or months, and to thousands of kilometers of range. [1] The typical up-and-down, sawtooth-like profile followed by a glider can provide data on temporal and spatial scales unattainable by powered AUVs and much more costly to sample using traditional shipboard techniques. A wide variety of glider designs are in use by navies and ocean research organizations, with gliders typically costing around US$100,000. [2]

The concept of an underwater glider was first explored in the early 1960s with a prototype swimmer delivery vehicle named Concept Whisper. [3] The sawtooth glide pattern, stealth properties and the idea of a buoyancy engine powered by the swimmer-passenger was described by Ewan Fallon in his Hydroglider patent submitted in 1960. [4] In 1992, the University of Tokyo conducted tests on ALBAC, a drop weight glider with no buoyancy control and only one glide cycle.[ citation needed ] The DARPA SBIR program received a proposal for a temperature gradient glider in 1988. DARPA was aware at that time of similar research projects underway in the USSR. [5] This idea, a glider with a buoyancy engine powered by a heat exchanger, was introduced to the oceanographic community by Henry Stommel in a 1989 article in Oceanography, when he proposed a glider concept called Slocum, developed with research engineer Doug Webb. They named the glider after Joshua Slocum, who made the first solo circumnavigation of the globe by sailboat. They proposed harnessing energy from the thermal gradient between deep ocean water (2-4 °C) and surface water (near atmospheric temperature) to achieve globe-circling range, constrained only by battery power on board for communications, sensors, and navigational computers. [3]

By 2003, not only had a working thermal-powered glider (Slocum Thermal) been demonstrated by Webb Research (founded by Doug Webb), but they and other institutions had introduced battery-powered gliders with impressive duration and efficiency, far exceeding that of traditional survey-class AUVs. [6] These vehicles have been widely deployed in the years since then. The University of Washington Seaglider , Scripps Institution of Oceanography Spray, and Teledyne Webb Research Slocum vehicles have performed feats such as completing a transatlantic journey [7] and conducting sustained, multi-vehicle collaborative monitoring of oceanographic variables.[ citation needed ] In 2011, the first wingless glider, SeaExplorer, was released by a collaboration of French institutions and companies. [8]

In 2020, NOAA was using "hurricane gliders" to monitor the temperature of the water around the Gulf Stream, for the agency to better understand how warm waters affect hurricanes and storms. [9]

Gliders typically make measurements such as temperature, conductivity (to calculate salinity), currents, chlorophyll fluorescence, optical backscatter, bottom depth, and sometimes acoustic backscatter or ambient sound. They navigate with the help of periodic surface GPS fixes, pressure sensors, tilt sensors, and magnetic compasses. Vehicle pitch is controllable by movable internal ballast (usually battery packs), and steering is accomplished either with a rudder (as in Slocum) or by moving internal ballast to control roll (as in SeaExplorer, Spray and Seaglider). Buoyancy is adjusted either by using a piston to flood/evacuate a compartment with seawater (Slocum) or by moving oil in/out of an external bladder (SeaExplorer, Seaglider, Spray, and Slocum Thermal). Because buoyancy adjustments are relatively small, a glider's ballast must typically be adjusted before the start of a mission to achieve an overall vehicle density close to that of the water it will be deployed in. Commands and data are relayed between gliders and shore by satellite. [3]

Gliders vary in the pressure they are able to withstand. The Slocum model is rated for 200 meter or 1000 meter depths. Spray can operate to 1500 meters, Seaglider to 1000 meters, SeaExplorer to 700, and Slocum Thermal to 1200. In August 2010, a Deep Glider variant of the Seaglider achieved a repeated 6000-meter operating depth.[ citation needed ] Similar depths have been reached by a Chinese glider in 2016. [10]

In 2004, the US Navy Office of Naval Research began developing the world's largest gliders, the Liberdade class flying wing gliders, which uses a blended wing body hullform to achieve hydrodynamic efficiency. They were initially designed to quietly track diesel electric submarines in littoral waters, remaining on station for up to 6 months. By 2012, a newer model, known as the ZRay, was designed to track and identify marine mammals for extended periods of time. [11] It uses water jets for fine attitude control as well as propulsion on the surface. [11] [12] [ needs update ] 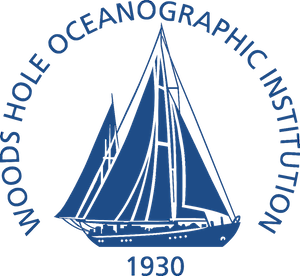 The Woods Hole Oceanographic Institution is a private, nonprofit research and higher education facility dedicated to the study of marine science and engineering. 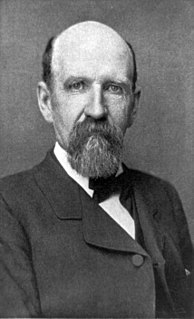 Joshua Slocum was the first person to sail single-handedly around the world. He was a Nova Scotian-born, naturalised American seaman and adventurer, and a noted writer. In 1900 he wrote a book about his journey, Sailing Alone Around the World, which became an international best-seller. He disappeared in November 1909 while aboard his boat, the Spray. 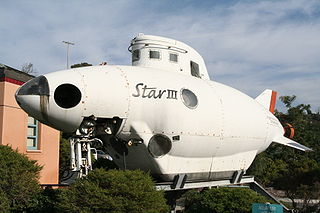 A submersible is a small watercraft designed to operate underwater. The term submersible is often used to differentiate from other underwater vessels known as submarines, in that a submarine is a fully autonomous craft, capable of renewing its own power and breathing air, whereas a submersible is usually supported by a surface vessel, platform, shore team or sometimes a larger submarine. In common usage by the general public, however, the word submarine may be used to describe a craft that is by the technical definition actually a submersible. There are many types of submersibles, including both crewed and uncrewed craft, otherwise known as remotely operated vehicles or ROVs. Submersibles have many uses worldwide, such as oceanography, underwater archaeology, ocean exploration, adventure, equipment maintenance and recovery, and underwater videography.

The Monterey Bay Aquarium Research Institute (MBARI) is a private, non-profit oceanographic research center in Moss Landing, California. MBARI was founded in 1987 by David Packard, and is primarily funded by the David and Lucile Packard Foundation. Christopher Scholin serves as the institute's president and chief executive officer, managing a work force of approximately 220 scientists, engineers, and operations and administrative staff. 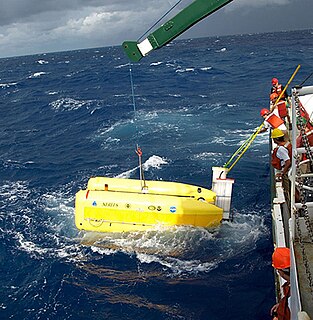 Nereus was a hybrid uncrewed autonomous underwater vehicle built by the Woods Hole Oceanographic Institution (WHOI). Constructed as a research vehicle to operate at depths of up to 11,000 metres (36,000 ft), it was designed to explore Challenger Deep, the deepest surveyed point in the global ocean. Nereus, named for Greek sea titan Nereus through a nationwide contest of high school and college students, began its deep sea voyage to Challenger Deep in May 2009 and reached the bottom on May 31, 2009.

Explorer autonomous underwater vehicle (AUV) is a Chinese AUV developed in the People's Republic of China (PRC),first entering service in November 1994. It should not be confused with another two Anglo-American AUVs that share the same name: the American Autonomous Benthic Explorer AUV (ABE) built by Woods Hole Oceanographic Institution, and the British Columbia-based International Submarine Engineeringbuilt Canadian Explorer AUV, which is based on its earlier ARCS AUV.Many Chinese AUVs later developed, such as Wukong, WZODA, CR series, Exploration series, Micro Dragon series, Sea Whale series, Submerged Dragon series AUVs, are all based on experienced gained from Explorer AUV.

The Sentry is an autonomous underwater vehicle (AUV) made by the Woods Hole Oceanographic Institution. Sentry is designed to descend to depths of 6,000 metres (20,000 ft) and to carry a range of devices for taking samples, pictures and readings from the deep sea.

The SOLO-TREC is a profiling float that uses a novel thermal recharging engine powered by the natural temperature differences found at different ocean depths to cycle up and down in the ocean. The research and prototype were developed by researchers at the Jet Propulsion Laboratory in Pasadena, CA, and the Scripps Institution of Oceanography in San Diego, CA. The project name stands for "Sounding Oceanographic Lagrangrian Observer Thermal RECharging" vehicle.

Liquid Robotics is an American marine robotics corporation that designs, manufactures and sells the Wave Glider, a wave and solar powered unmanned surface vehicle (USV). The Wave Glider harvests energy from ocean waves for propulsion. With this energy source, Wave Gliders can spend many months at a time at sea, collecting and transmitting ocean data.

Liberdade class blended wing bodies are autonomous underwater gliders developed by the US Navy Office of Naval Research which use a blended wing body hullform to achieve hydrodynamic efficiency. It is an experimental class whose models were originally intended to track quiet diesel electric submarines in littoral waters, move at 1–3 knots and remain on station for up to six months. The "Liberdade" was the name of a ship built by Joshua Slocum prior to the one he single-handedly piloted around the world.

A buoyancy engine is a device that alters the buoyancy of a vehicle or object in order to either move it vertically, as in the case of underwater profiling floats and stealth buoys, or provide forward motion such as with underwater gliders and some autonomous aircraft.

A variable buoyancy pressure vessel system is a type of rigid buoyancy control device for diving systems that retains a constant volume and varies its density by changing the weight (mass) of the contents, either by moving the ambient fluid into and out of a rigid pressure vessel, or by moving a stored liquid between internal and external variable volume containers. A pressure vessel is used to withstand the hydrostatic pressure of the underwater environment. A variable buoyancy pressure vessel can have an internal pressure greater or less than external ambient pressure, and the pressure difference can vary from positive to negative within the operational depth range, or remain either positive or negative throughout the pressure range, depending on design choices.

CSSC unmanned vehicles (UUV)s are uncrewed vehicles developed in the People's Republic of China (PRC) by China State Shipbuilding Corporation (CSSC), most of which are in service with various Chinese governmental agencies/departments, and government-owned enterprises.

Hadal ARV is a type of very little known unmanned underwater vehicle (UUV) built in the People's Republic of China (PRC). ARV stands for Autonomous Remotely-controlled Vehicle, an idea pioneered in China by Shenyang Institute of Automation (SIA) of Chinese Academy of Sciences (CAS), and SIA is also the developer of Hadal ARV and its predecessor Arctic ARV, as well as Hadal 1 ARV, the successor of Hadal ARV. Hadal and its predecessor Arctic series ARVs are the Chinese counterparts of Nereus hybrid unmanned underwater vehicle, because just like Nereus hybrid UUV, these ARVs can operate both as an AUV or a ROUV.

Ostar unmanned vehicles are uncrewed vehicles. They are developed in the People's Republic of China (PRC) by Ostar, most of which are in service with various Chinese governmental agencies/departments, and government-owned enterprises.

Wikimedia Commons has media related to Underwater gliders .
This page is based on this Wikipedia article
Text is available under the CC BY-SA 4.0 license; additional terms may apply.
Images, videos and audio are available under their respective licenses.