The 1913 Australian Referendum was held on 31 May 1913. It contained six referendum questions and was held in conjunction with the 1913 federal election.

Federal elections were held in Australia on 31 May 1913. All 75 seats in the House of Representatives, and 18 of the 36 seats in the Senate were up for election. The incumbent Labor Party, led by Prime Minister Andrew Fisher, was defeated by the opposition Commonwealth Liberal Party under Joseph Cook. The new government had a majority of just a single seat, and held a minority of seats in the Senate. It would last only 15 months, suffering defeat at the 1914 election.

Having failed with the 1911 referendum, the Attorney-General, Billy Hughes, tried again, breaking each of the changes into separate questions. The changes were said to be necessary because the Commonwealth's powers had been cut down by successive decision of the High Court in applying the inter-governmental immunities and reserved state powers doctrines until they were said to be futile. The cases referred to by the Attorney-General were: [1]

William Morris Hughes, was an Australian politician who served as the 7th Prime Minister of Australia, in office from 1915 to 1923. He is best known for leading the country during World War I, but his influence on national politics spanned several decades. Hughes was a member of federal parliament from Federation in 1901 until his death, the only person to have served for more than 50 years. He represented six political parties during his career, leading five, outlasting four, and being expelled from three.

Attorney-General (NSW) v Brewery Employees Union of NSW, commonly known as the Union Label case, was a landmark decision by the High Court of Australia on 8 August 1908. The case was significant in relation to the endorsement by the majority of the court of the reserved powers doctrine and as the first case to consider the scope of the power of the Commonwealth regarding trade marks. It also addressed who could challenge a law as unconstitutional. There was a strong division in the Court between the original members, Griffith CJ, Barton and O'Connor JJ and the two newly appointed justices, Isaacs and Higgins JJ.

Melbourne Steamship Co Ltd v Moorehead was the last of a series of cases in which members of a cartel, described as the "Coal Vend" were prosecuted under the Australian Industries Preservation Act. The majority of the High Court held that the investigation power was spent once a prosecution had commenced and that under the Act, a corporation could not be required to answer questions. While the decision was based on the wording of the specific legislation, its ongoing significance is its foundation for the requirement that the government act as a model litigant.

Writs were issued for a further referendum to be held on 11 December 1915 to cover substantially the same questions as were rejected in 1911 and 1913, [14] however the referendum was cancelled and the writs withdrawn. [15]

The politics of Australia take place within the framework of a federal parliamentary constitutional monarchy. Australians elect parliamentarians to the federal Parliament of Australia, a bicameral body which incorporates elements of the fused executive inherited from the Westminster system, and a strong federalist senate, adopted from the United States Congress. Australia largely operates as a two-party system in which voting is compulsory. The Economist Intelligence Unit has rated Australia as a "full democracy" in 2018.

The history of Australia is the history of the area and people of the Commonwealth of Australia with its preceding Indigenous and colonial societies. Aboriginal Australians arrived on the Australian mainland by sea from Maritime Southeast Asia between 40,000 and 70,000 years ago. The artistic, musical and spiritual traditions they established are among the longest surviving such traditions in human history .

The Constitution Alteration Bill 1910, was an unsuccessful Australian referendum held in the 1911 referendums which sought to alter the Australian Constitution to extend the Commonwealth power in respect of trade and commerce, the control of corporations, labour and employment and combinations and monopolies. All of the proposed changes were contained within the one question. 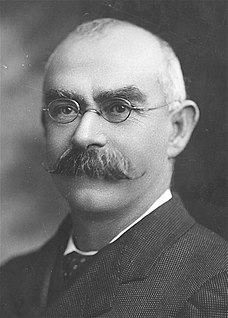 Sir Frank Gavan Duffy, KCMG, KC was an Australian judge who served as the fourth Chief Justice of Australia, in office from 1931 to 1935. His total service on the High Court of Australia was from 1913 to 1935. Prior to his judicial career, he was one of Victoria's most prominent barristers.

Amalgamated Society of Engineers v Adelaide Steamship Co Ltd, commonly known as the Engineers case, was a landmark decision by the High Court of Australia on 31 August 1920. The immediate issue concerned the Commonwealth's power under s51(xxxv) of the Constitution but the court did not confine itself to that question, using the opportunity to roam broadly over constitutional interpretation.

Section 109 of the Constitution of Australia deals with the legislative inconsistency between federal and state laws and declares that valid federal laws override inconsistent State laws, to the extent of the inconsistency. Section 109 is analogous to the Supremacy Clause in the United States Constitution and the Paramountcy doctrine in Canadian constitutional jurisprudence, and the jurisprudence in one jurisdictions is considered persuasive in the others.

The reserved powers doctrine was a principle used by the inaugural High Court of Australia in the interpretation of the Constitution of Australia, that emphasised the context of the Constitution, drawing on principles of federalism, what the Court saw as the compact between the newly formed Commonwealth and the former colonies, particularly the compromises that informed the text of the constitution. The doctrine involved a restrictive approach to the interpretation of the specific powers of the Federal Parliament to preserve the powers that were intended to be left to the States. The doctrine was challenged by the new appointments to the Court in 1906 and was ultimately abandoned by the High Court in 1920 in the Engineers' Case, replaced by an approach to interpretation that emphasised the text rather than the context of the Constitution.

Strickland v Rocla Concrete Pipes Ltd, also known as the Concrete Pipes Case, is a High Court of Australia case that discusses the scope of the corporations power in section 51(xx) of the Australian Constitution. This was an important case in Australian constitutional law because it overruled the decision in the earlier case of Huddart, Parker & Co Pty Ltd v Moorehead, which held that the corporations power only extended as far as the regulation of their conduct in relation to their transactions with or affecting the public. Since this case, the Commonwealth has had at least the ability to regulate the trading activities of trading corporations, thus opening the way for an expansion in Commonwealth power.

R v Barger is a High Court of Australia case where the majority held that the taxation power could not be used by the Australian Parliament to indirectly regulate the working conditions of workers. In this case, an excise tariff was imposed on manufacturers, with an exemption being available for those who paid "fair and reasonable" wages to their employees.

Jumbunna Coal Mine NL v Victorian Coal Miners' Association is a landmark Australian judgment of the High Court. The matter related to the Commonwealth Government's power to make laws for the conciliation and arbitration of interstate industrial disputes under subsection 51(xxxv) of the Australian Constitution and the incidental power under subsection 51(xxxix), but in reaching a decision set principles on matters of statutory interpretation affecting the Constitution.

Waterside Workers' Federation of Australia v J W Alexander Ltd is a landmark Australian judgment of the High Court made in 1918 regarding judicial power of the Commonwealth which established that Chapter III of the Constitution required judges to be appointed for life to a specific court, subject only to the removal provisions in the constitution. The majority of the High Court held that because the President of the Commonwealth Court of Conciliation and Arbitration was appointed for seven years and not life as required by s 72 of the Constitution, the Arbitration Court could not exercise judicial powers of the Commonwealth.

Huddart, Parker & Co Pty Ltd v Moorehead is a leading decision by the High Court of Australia that dealt with two issues under the Australian Constitution, the identification and extent of judicial power that is vested in the courts and the corporations power of the Parliament. The Court unanimously held that the inquiry provisions of the Australian Industries Preservation Act 1906 were not an exercise of judicial power. The judgement of Griffith CJ in particular continues to be cited in relation to its examination of the identification and extent of judicial power. The court however divided on the proper approach to the corporations power. The majority, Griffith CJ, Barton & O'Connor JJ, strongly influenced by the now discredited doctrine of reserved State powers, held that the corporations power was to be construed narrowly because the trade and commerce power did not include intrastate trade and commerce. While the reserved powers doctrine was unambiguously rejected by the High Court in 1920, Huddart, Parker was not formally overruled by the High Court until Strickland v Rocla Concrete Pipes Ltd (1971).

Federated Amalgamated Government Railway & Tramway Service Association v NSW Rail Traffic Employees Association, known as the Railway Servants Case, is an early High Court of Australia case that held that employees of State railways could not be part of an interstate industrial dispute under the conciliation and arbitration power, applying the doctrine of "implied inter-governmental immunities". The doctrine was emphatically rejected by the High Court in the 1920 Engineers' Case, and in 1930 the High Court upheld the validity of an award binding on state railway authorities.

Australian Boot Trade Employees Federation v Whybrow & Co, commonly known as Whybrow's case or the Boot Trades case was the third of a series of decisions of the High Court of Australia in 1910 concerning the boot manufacturing industry and the role of the Commonwealth Court of Conciliation and Arbitration in preventing and settling industrial disputes. In doing so the High Court considered the constitutional power of the Federal Parliament to provide for common rule awards and the jurisdiction of the High Court to grant prohibition against the Arbitration Court. The majority held in Whybrow that the Arbitration Court could not make an award that was inconsistent with a State law, but that different minimum wages were not inconsistent as it was possible to obey both laws. In Whybrow the High Court established the doctrine of ambit, with the emphasis on the precise claim made and refused, and the practice with respect to "paper disputes" being treated "prima facie as genuine and real", with the majority holding that the High Court had power to order prohibition to correct jurisdictional error as part of its original jurisdiction. Finally in Whybrow the High Court unanimously held that the Federal Parliament had no constitutional power to provide for common rule awards.

Federated Sawmill Employees Association v James Moore & Sons Pty Ltd, commonly known as the Woodworkers case or the Sawmillers case was a decision of the High Court of Australia in 1909 concerning the question whether the Commonwealth Court of Conciliation and Arbitration could make an award that was inconsistent with a State wages board determination. The High Court was divided 2:2 and thus the decision of the Chief Justice prevailed, in what is sometimes described as a statutory majority. Griffith CJ, O'Connor J agreeing, held that the Arbitration Court could not make an award that was inconsistent with the minimum wages fixed by a Wages Board under a State law.

R v Associated Northern Collieries is a decision of the High Court of Australia concerning the activities of the Coal-Vend cartel. The convictions entered by Isaacs J in this decision were later set aside by the Full Court in Adelaide Steamship Co Ltd v The King.