Despite a break in prime ministerships in 1904-05 and 1908–09, this is the first of three consecutive elections in which Deakin was the sitting prime minister.

The wreck of SS Petriana outside Port Phillip Bay in late November prompted the government's handling of the White Australia policy to become a campaign issue. Shipwrecked Asian sailors were denied entry to Australia and forced to stay on a crowded tugboat for several days, leading The Argus , Daily Telegraph and The Sydney Morning Herald to accuse the government of cruelty and harming Australia's international reputation. The Age and The Bulletin sided with the government. The issue was "constantly raised" at election meetings, particularly in Victoria and Tasmania. [1]

The election saw the Labour party make significant gains outside New South Wales and Victoria. As a result of Labour's gains, the numbers of the three parties in Parliament were very close to equal, leading to unstable governments. Alfred Deakin would describe it as a parliament of "three elevens" (three cricket teams). Although the Protectionists were able to retain their minority government with the qualified support of the Labour Party, the equal numbers would see a record three changes of government over the course of the Parliamentary term, with each of the three parties holding office at least once during the term of the Parliament.

The three parties that contested the 1901 election also contested the 1903 election, with only the Protectionists changing leaders to Alfred Deakin as a result of Edmund Barton's appointment as an inaugural judge of the newly constituted High Court of Australia. The Free Trade Party was again led by George Reid. The only significant difference in policy between these parties was on trade issues.[ dubious – discuss ] The Protectionists sought to protect Australian industry and agriculture by placing tariffs on imports. The Free Traders downgraded the view they had last election of having no tariffs to campaigning on minimal tariffs. The other major party contesting the election was the Labour Party.

Like the 1901 election, voting was voluntary and candidates were elected by the first-past-the-post system. The Commonwealth Franchise Act 1902 gave women the vote and the right to stand for federal Parliament, leading to a significant increase in the number of votes cast in the 1903 federal election. Four women stood at the 1903 election – Selina Anderson (Dalley) in the House of Representatives and Vida Goldstein (Victoria), Nellie Martel (New South Wales), and Mary Moore-Bentley (New South Wales) in the Senate. [7] All four stood as independents and all were unsuccessful.

Candidates were contesting all 75 House of Representatives and 19 of the 36 Senate seats, a number unchanged from the 1901 election. The House of Representative seats were determined by the population of each state, giving 26 seats to New South Wales, 23 to Victoria, nine to Queensland, seven to South Australia and five to both Western Australia and Tasmania. In 1901, the South Australian and Tasmanian colonial parliaments had not legislated for single member electorates, so their House of Representative members were elected from a single statewide electorate. This had since changed and there were now single member electorates in both states. The newly created seats were Adelaide, Angas, Barker, Boothby, Grey, Hindmarsh and Wakefield (South Australia) and Bass, Darwin, Denison, Franklin and Wilmot (Tasmania).

Each state elected six Senators regardless of population. The Senate was elected by bloc voting rather than the current single transferable vote system. Half the Senators retired as their terms expired, and there was one casual vacancy. 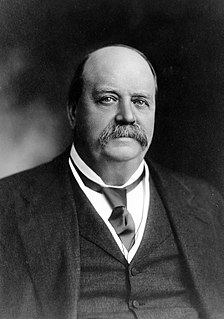 Sir George Houston Reid was an Australian politician who led the Reid Government as the fourth Prime Minister of Australia from 1904 to 1905, having previously been Premier of New South Wales from 1894 to 1899. He led the Free Trade Party from 1891 to 1908. 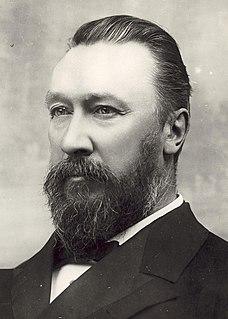 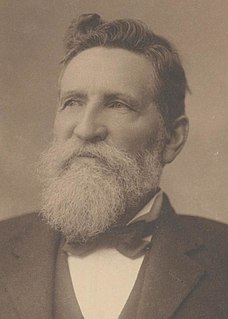 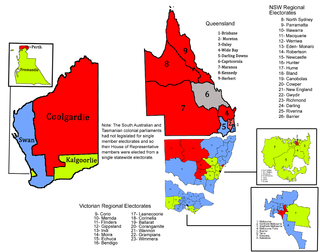 This is a list of the members of the Australian Senate in the First Australian Parliament, which was elected on 29 March 1901. There were 36 senators in this initial parliament. Terms were deemed to start on 1 January 1901. In accordance with section 13 of the Constitution, the Senate resolved that in each State the three senators who received the most votes would sit for a six-year term, finishing on 31 December 1906 while the other half would sit for a three-year term, finishing on 31 December 1903. The process for filing of casual vacancies was complex, with an initial appointment followed by an election. The status of political parties varied, being national, State based, and informal.

The 1906 Australian federal election was held in Australia on 12 December 1906. All 75 seats in the House of Representatives, and 18 of the 36 seats in the Senate were up for election. The incumbent Protectionist Party minority government led by Prime Minister Alfred Deakin retained government, despite winning the fewest House of Representatives votes and seats of the three parties. Parliamentary support was provided by the Labour Party led by Chris Watson, while the Anti-Socialist Party, led by George Reid, remained in opposition. 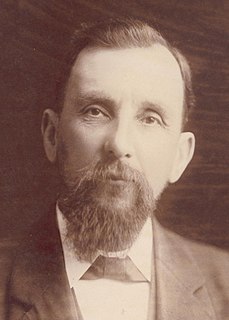 David Storrer was an Australian politician.

Edward Pulsford was an English-born Australian politician and free-trade campaigner.

This article provides information on candidates who stood for the 1901 Australian federal election. The election was held on 29/30 March 1901.

This article provides information on candidates who stood for the 1903 Australian federal election. The election was held on 16 December 1903. 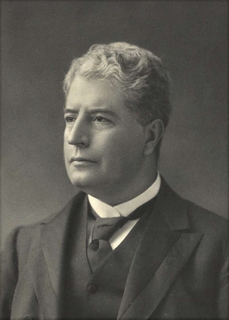 The Barton Government was the first federal Executive Government of the Commonwealth of Australia. It was led by Prime Minister Sir Edmund Barton, from 1 January 1901 until 24 September 1903, when Barton resigned to become one of the three founding judges of the High Court of Australia.

The following tables show state-by-state results in the Australian Senate at the 1901 federal election. Senators total 17 Free Trade, 11 Protectionist, and eight Labour. The terms were deemed to start on 1 January 1901. In each state, the first three elected received full six-year terms, and the three senators elected with the lowest number of votes retire after three years.