The Bengal cricket team represents the Indian state of West Bengal in domestic first-class cricket. It is considered Eastern India's strongest cricket team. The team plays its home matches at the historic Eden Gardens in Kolkata. Bengal has won two Ranji Trophy victories and has been runner-up a total of 12 times. [2]

Bengal won the Vijay Hazare Trophy, also known as the Ranji One Day Trophy, in 2012. Under the captaincy of Sourav Ganguly, it beat Mumbai in the finals at the Feroz Shah Kotla Ground, Delhi on 12 March 2012. [3]

Bengal's first success came in the third Ranji Trophy season (1936/37), in which it came runners-up to Nawanagar. Two years later it beat Southern Punjab in the final of the Ranji Trophy to become the 4th team to hold the title. For the next 51 years, although it had been runner-up 11 times (including the year before), it did not regain the title until it beat a strong Delhi team in the 1990 final.

The team was runner-up twice consecutively in the 2005–06 and the 2006–07 season. Their ranks are occasionally bolstered by the return of Sourav Ganguly to the domestic competition. 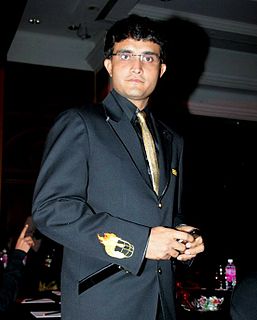 The Ranji Trophy is a domestic first-class cricket championship played in India between multiple teams representing regional and state cricket associations. The competition currently consists of 38 teams, with all 28 states in India and four of the eight union territories having at least one representation. The competition is named after the first Indian cricketer who played international cricket, Ranjitsinhji, who was also known as 'Ranji'.

Laxmi Ratan Shuklapronunciation (help·info), is a former Indian cricketer and politician. He is a right-handed middle-order batsman and a right-arm medium-pace bowler. He represented Bengal cricket team. He was also a player in the IPL team Kolkata Knight Riders, Delhi Daredevils, and the Sunrisers Hyderabad. He was a member of the legislative assembly of West Bengal representing the All India Trinamool Congress. He resigned from the ministry on 5 January 2021.

The Punjab cricket team is a first-class cricket team that represents the Indian state of Punjab. They have qualified for only one Ranji Trophy semi-final in the last five seasons, and made it to the final in 2004–05 tournament, where they lost to Railways on first innings. They also play in other domestic cricket tournaments in India. They have only been winners of the Ranji Trophy once, in the 1992–93 season.

The Delhi cricket team is a first-class cricket team based in Delhi, run by the Delhi District Cricket Association, that plays in India's first class competition, the Ranji Trophy and limited-overs Vijay Hazare Trophy and Syed Mushtaq Ali Trophy. They have won the Ranji Trophy seven times and have been runners-up eight. Their latest title in 2007-08 came after a long wait of 16 years. The previous win was in the 1991–92 season when they beat Tamil Nadu in the final. The team's home ground is Arun Jaitley Stadium.

Deep Dasgupta is a former Indian cricketer who played in 8 Tests and 5 ODIs between 2001 and 2006 as the national wicketkeeper and he is now a Hindi and English commentator. He was later replaced by Ajay Ratra.

The Vidarbha cricket team is an Indian domestic cricket team plays in the India's domestic first-class cricket competition Ranji Trophy and limited-overs Vijay Hazare Trophy and Syed Mushtaq Ali Trophy. It represents the Vidarbha region of eastern Maharashtra. In December 2017, they reached the final of the Ranji Trophy for the first time in their history, after they beat Karnataka by 5 runs in the semi-finals of the 2017–18 Ranji Trophy tournament. In the final, they beat Delhi by 9 wickets to win their first Ranji Trophy. In the 2018-19 Ranji Trophy, Vidarbha successfully defended the crown by defeating Saurashtra by 78 runs in the final played at Nagpur.

This article describes the history of cricket in India from the 2000–01 season to the present.

Eden Gardens is a cricket ground in Kolkata, India. Established in 1864, it is the oldest and second-largest cricket stadium in India after the newly built Narendra Modi Stadium and third-largest in the world after Narendra Modi Stadium and Melbourne Cricket Ground. The stadium currently has a capacity of 80,000. On 22 November 2019, the venue hosted the first ever day/night Test match in India during the second Test between India and Bangladesh.

Shubman Gill is an Indian international cricketer who plays for Punjab in domestic cricket and for the Kolkata Knight Riders in the Indian Premier League (IPL) as a right-handed opening batsman. He made his first-class debut for Punjab against Bengal in the 2017–18 Ranji Trophy, in late 2017, with a half-century in the game, and 129 runs in the next match against Services. He made his international debut for the Indian cricket team in January 2019.

The 2019–20 Ranji Trophy was the 86th season of the Ranji Trophy, the premier first-class cricket tournament in India. It took place between December 2019 and March 2020. Chandigarh competed in the Ranji Trophy for the first time. Vidarbha were the defending champions.