Last updated November 29, 2022
Club formed for the purpose of playing the board game of chess

A chess club is a club formed for the purpose of playing the board game of chess. Chess clubs often provide for both informal and tournament games and sometimes offer league play. Traditionally clubs host over the board, face to face chess more than play on internet chess servers or computer chess.

Clubs are mainly attached to a national federation, either directly or through membership of a regional chess association. The national federation in turn is a member of FIDE, the international governing body of chess. The global aegis helps to establish uniformity of rules and playing conditions internationally, though some countries such as the United States use their own official set of rules with minor differences from FIDE rules. The United States has many chess clubs affiliated with the United States Chess Federation (USCF). A club's affiliation with its national chess federation helps to standardize chess tournament rules.

Chess clubs typically provide at least some of the following: 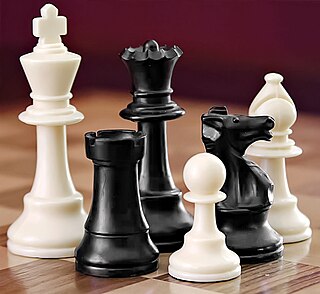 Chess is a board game between two players. It is sometimes called Western chess or international chess to distinguish it from related games, such as xiangqi and shogi. The current form of the game emerged in Spain and the rest of Southern Europe during the second half of the 15th century after evolving from chaturanga, a similar but much older game of Indian origin. Today, chess is one of the world's most popular games, played by millions of people worldwide.

The International Chess Federation or World Chess Federation, commonly referred to by its French acronym FIDE, is an international organization based in Switzerland that connects the various national chess federations and acts as the governing body of international chess competition. FIDE was founded in Paris, France, on July 20, 1924. Its motto is Gens una sumus, Latin for "We are one Family". In 1999, FIDE was recognized by the International Olympic Committee (IOC). As of May 2022, there are 200 member federations of FIDE.

Grandmaster (GM) is a title awarded to chess players by the world chess organization FIDE. Apart from World Champion, Grandmaster is the highest title a chess player can attain. Once achieved, the title is held for life, though exceptionally it has been revoked for cheating. 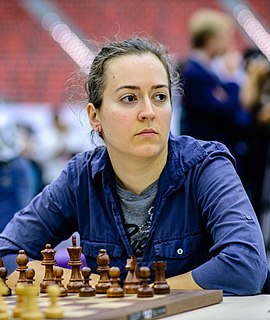 Irina Borisivna Krush is an American chess Grandmaster. She is the first woman, and as of August 2022 the only woman, to earn the GM title while playing for the United States. Krush is an eight-time U.S. Women's Champion.

The rules of chess govern the play of the game of chess. Chess is a two-player abstract strategy board game. Each player controls sixteen pieces of six types on a chessboard. Each type of piece moves in a distinct way. The object of the game is to checkmate the opponent's king. A game can end in various ways besides checkmate: a player can resign, and there are several ways in which a game can end in a draw. 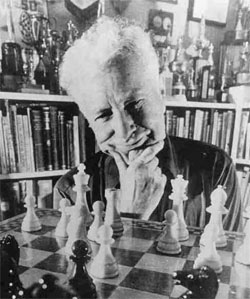 Correspondence chess is chess played by various forms of long-distance correspondence, traditionally through the postal system. Today it is usually played through a correspondence chess server, a public internet chess forum, or email. Less common methods that have been employed include fax, homing pigeon and phone. It is in contrast to over-the-board (OTB) chess, where the players sit at a chessboard at the same time, or play each other in real time via the internet.

The United States Chess Federation is the governing body for chess competition in the United States and represents the U.S. in FIDE, the World Chess Federation. US Chess administers the official national rating system, awards national titles, sanctions over twenty national championships annually, and publishes two magazines: Chess Life and Chess Life for Kids. The USCF was founded and incorporated in Illinois in 1939, from the merger of two older chess organizations. It is a 501(c)(3) non-profit organization headquartered in St. Louis, Missouri. Its membership as of 2020 as COVID hit was 97,000; as of July 2022 it is 85,000.

Cheating in chess is a deliberate violation of the rules of chess or other behaviour that is intended to give an unfair advantage to a player or team. Cheating can occur in many forms and can take place before, during, or after a game. Commonly cited instances of cheating include: collusion with spectators or other players, use of chess engines during play, rating manipulation, and violations of the touch-move rule. Many suspiciously motivated practices are not comprehensively covered by the rules of chess. On ethical or moral grounds only, such practices may be judged by some as acceptable, and by others as cheating. 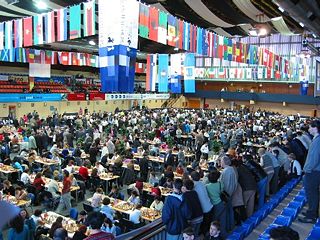 A chess rating system is a system used in chess to estimate the strength of a player, based on their performance versus other players. They are used by organizations such as FIDE, the US Chess Federation, International Correspondence Chess Federation, and the English Chess Federation. Most of the systems are used to recalculate ratings after a tournament or match but some are used to recalculate ratings after individual games. Popular online chess sites such as chess.com, Lichess, and Internet Chess Club also implement rating systems. In almost all systems, a higher number indicates a stronger player. In general, players' ratings go up if they perform better than expected and down if they perform worse than expected. The magnitude of the change depends on the rating of their opponents. The Elo rating system is currently the most widely used.

The 40th Chess Olympiad, organised by the Fédération Internationale des Échecs and comprising an open and women's tournament, as well as several events designed to promote the game of chess, took place in Istanbul, Turkey, from 27 August to 10 September 2012. The city also hosted the event in 2000. 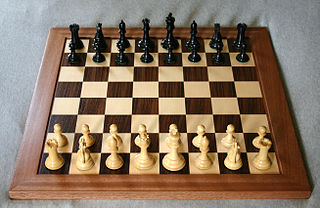 The 43rd Chess Olympiad, organised by the Fédération Internationale des Échecs (FIDE) and comprising open and women's tournaments, as well as several events designed to promote the game of chess, was held in Batumi, Georgia, from 23 September to 6 October 2018. This was the first Chess Olympiad to take place in Georgia with the Georgian Chess Federation also hosting the Chess World Cup 2017 in Tbilisi.