Cooties is a fictitious childhood disease, commonly represented as childlore. It is used in the United States, Canada, Australia, New Zealand, and the Philippines as a rejection term and an infection tag game (such as Humans vs. Zombies). It is similar to the British 'dreaded lurgi', and to terms used in the Nordic countries, in Italy, India and Iraq. [1] A child is said to "catch" cooties through close contact with an "infected" person or from an opposite-sex child of a similar age.

The word is thought to originate from the Austronesian language family, in which the Philippine, Malaysian-Indonesian, and Maori [2] languages have the word kuto or kutu, which in turn refers to a parasitic biting insect. [3] However, it is equally likely the name originated from "cuties", a cynical reference to the same. The earliest recorded uses of the term in English are by British soldiers during the First World War to refer to lice that proliferated in battlefield trenches. [4] [5]

A hand-held game, the Cootie Game, was made by the Irvin-Smith Company of Chicago in 1915; it involved tilting capsules (the cooties) into a trap over a background illustration depicting a battlefield. [6] Other cootie games followed, all involving some form of "bug" or "cootie", [6] until The Game of Cootie was launched in 1948 by Schaper Toys. [7] This game was very successful, becoming an icon; [8] in 2003, the Toy Industry Association included it on its "Century of Toys List" of the 100 most memorable and most creative toys of the 20th century.

In addition to the cooties games, the term cooties was popularised in America in the 1950s by military personnel coming back from service alongside the British in the South Pacific. [4] [9] Like the British 'dreaded lurgi', the cooties games developed during the early 1950s polio epidemic, and became associated with dirt and contagion. [1] [10]

The lice of the First World War trenches nicknamed "cooties" were also known as "arithmetic bugs" because "they added to our troubles, subtracted from our pleasures, divided our attention, and multiplied like hell." [11]

In Italy, children have the term la peste ("the plague"). [1] Cooties are known in Denmark as pigelus and drengelus and in Norway as jentelus and guttelus: each pair meaning literally "girl lice" and "boy lice". In Sweden they are known as tjejbaciller and killbaciller [12] (literally "girl/boy bacilli") and in Finland they are known as the tyttöbakteeri and poikabakteeri ("girl/boy bacteria"). In Serbia the game is known as šuga; the word means scabies.

A child is said to "catch" cooties through any form of bodily contact, proximity, or touching of an "infected" person or from a person of the opposite sex of the same age. Often the "infected" person is someone who is perceived as different, due to disability, shyness, being of the opposite sex, or having peculiar mannerisms. [13] The phrase is most commonly used by children in elementary school aged from four to ten; however, it may be used by older children in a sarcastic or playful way. [9] Sometimes the phrase specifies the type of cooties, as in "you've got girl cooties!" or "you've got boy cooties!" after a child has been touched by or in other ways interacted with a child of the opposite sex.

In the United States, children sometimes "immunize" one another from cooties by administering a "cootie(s) shot". [4] Typically, one child administers the "shot", using an index finger to trace circles and dots on another child's forearm while reciting the rhyme, "Circle, circle, Dot, dot, – Now you've got the cootie shot!" In some variations, a child then says, "Circle, circle, Square, square, – Now you have it everywhere!" In this case, the child receives an immunization throughout their body. These variations may continue to a final shot where the child says, "Circle, circle, Knife, knife, – Now you've got it all your life!". A number of other variations exist. 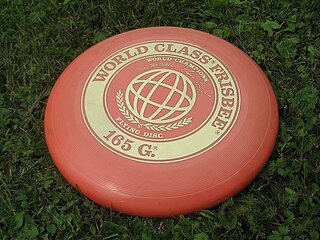 A flying disc is a gliding toy or sporting item that is generally made of injection-molded plastic and roughly 8 to 10 inches in diameter with a pronounced lip. It is used recreationally and competitively for throwing and catching, as in flying disc games. The shape of the disc is an airfoil in cross-section which allows it to fly by reducing the drag and increasing lift as it moves through the air, compared to a flat plate. Spinning the disc imparts a stabilizing gyroscopic force, allowing it to be both aimed with accuracy and thrown for distance. 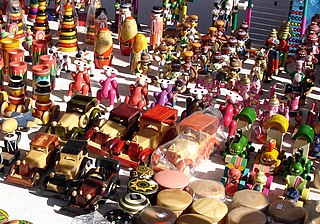 A toy is an item that is used primarily by children though may also be marketed to adults under certain circumstances. Playing with toys can be an enjoyable means of training young children for life experiences. Different materials like wood, clay, paper, and plastic are used to make toys. Many items are designed to serve as toys, but goods produced for other purposes can also be used. For instance, a small child may fold an ordinary piece of paper into an airplane shape and "fly it." Newer forms of toys include interactive digital entertainment and smart toys. Some toys are produced primarily as collectors' items and are intended for display only. 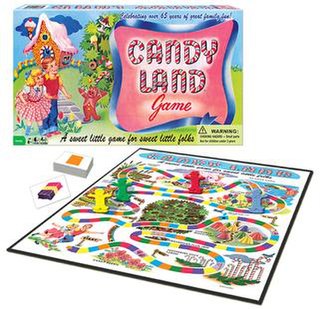 Candy Land is a simple racing board game published by Hasbro. The game requires no reading and minimal counting skills, making it suitable for young children. No strategy is involved as players are never required to make choices; only following directions is required. About one million copies per year are sold.

Play-Doh is a modeling compound for young children to make arts and crafts projects at home. The product was first manufactured in Cincinnati, Ohio, United States, as a wallpaper cleaner in the 1930s. Play-Doh was then reworked and marketed to Cincinnati schools in the mid-1950s. Play-Doh was demonstrated at an educational convention in 1956 and prominent department stores opened retail accounts.

Sea-Monkeys is a marketing term used to refer to brine shrimp (Artemia) that are sold as novelty aquarium pets. Developed in the United States in 1957 by Harold von Braunhut, they are sold as eggs intended to be added to water, and almost always come bundled in a kit of three pouches and instructions. Sometimes a small tank and/or supplementary pouches may also be included with the product. The product was heavily marketed in the 1960s and 70s, especially in comic books, and remains a presence in popular culture.

Alfred Carlton Gilbert was an American inventor, athlete, magician, toy-maker and businessman. Gilbert is best known as the inventor of the Erector Set and manufactured American Flyer Trains.

Don't Break the Ice is a children's tabletop game for two to four players ages 3 and up. First marketed by Schaper Toys in 1968, the game was sold to Hasbro subsidiary Milton Bradley in 1986. It is still in production, and special editions were released in conjunction with the films Frozen (2013) and Frozen II (2019).

Rock 'Em Sock 'Em Robots is a two-player action toy and game designed by Marvin Glass and Associates and was first manufactured by the Marx toy company in 1964. It features two dueling robot boxers, Red Rocker and Blue Bomber, mechanically manipulated by the players, and the game is won when one player knocks the head off of the opponent. The 2000s version of the game by Mattel features physically smaller robots.

A fortune teller is a form of origami used in children's games. Parts of the fortune teller are labelled with colors or numbers that serve as options for a player to choose from, and on the inside are eight flaps, each concealing a message. The person operating the fortune teller manipulates the device based on the choices made by the player, and finally one of the hidden messages is revealed. These messages may purport to answer questions or they may be activities that the player must perform. 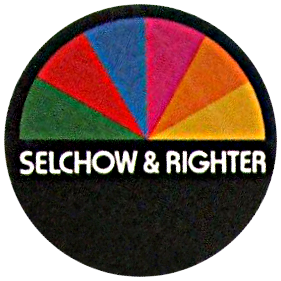 Selchow and Righter was a 19th- and 20th-century game manufacturer best known for the games Parcheesi and Scrabble. It was based in Bay Shore, New York.

Thomas Dam was a Danish woodworker and fisherman associated with Gjøl in Denmark. Dam designed and invented the original troll doll also known as the "Good Luck Troll". He created the toy during a period of financial distress, and carved it from wood. Soon, the family had started up a new business and Dam earned enough to buy himself a small factory where the dolls were produced in plastic. Dam created many different trolls as well as plastic baby dolls. Dam formed "Dam Things" to market the dolls. Dam trolls are now considered collectors' items. The Victoria and Albert Museum of London have one in their collection.

"Circle Circle Dot Dot" is a single by Jamie Kennedy and Stu Stone. It is the second single from their rap album Blowin' Up and is the first track on the album.

The Larami Corporation was a toy company established in by David W. Ring in Philadelphia, Pennsylvania, in 1959. Larami produced licensed toys based on several movies and television shows. The toys were manufactured in Hong Kong and Japan, were often of low quality, and were sold on racks in grocery store toy aisles for less than a dollar. By the 1980s, Larami had a growing water gun product line, and launched the Super Soaker brand in 1991. In 1995, Larami was acquired by Hasbro Inc, who changed the name of the company to Larami Inc. before retiring the name in 2002.

Schaper Toys, or W.H. Schaper Mfg. Co., Inc. as it was originally known, was a game and toy company founded in 1949 by William Herbert Schaper in Robbinsdale, Minnesota. "Herb" Schaper published a variety of games but was best known for having created the children's game, Cootie. In 1971, the company was sold to Kusan, Inc., and began operating as Schaper Toys, a subsidiary of Kusan, Inc. In 1986, Schaper Toys was acquired by Tyco Toys, which sold the rights to Cootie and three other of the company's best-known games to the Milton Bradley Company. These games are still being sold.

Mystery Date is a board game from the Milton Bradley Company released in 1965, conceived by Marvin Glass and created by Henry Stan. Marketed to girls 6 to 14 years of age, it has been reissued in 1970, 1999, and 2005. It is popularly referenced as a trope in TV and film. 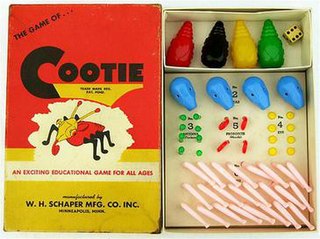 The Game of Cootie is a children's dice rolling and set collection tabletop game for two to four players. The object is to be the first to build a three-dimensional bug-like object called a "cootie" from a variety of plastic body parts. Created by William Schaper in 1948 and based on the traditional dice game Beetle, the game was launched in 1949 and was commercially successful, with copies totalling more than one million in the first few years. In 1973, Cootie was acquired by Tyco Toys, and, in 1986, by Hasbro subsidiary Milton Bradley. The game was given a new look and continued to enjoy commercial success. Several companies published cootie games in the first half of the twentieth century, but only Schaper's featured a free-standing, three-dimensional cootie. In 2003, Cootie was named to the Toy Industry Association's "Century of Toys List".

Milton Martin Levine was an American entrepreneur who was the co-founder of Uncle Milton Toys. 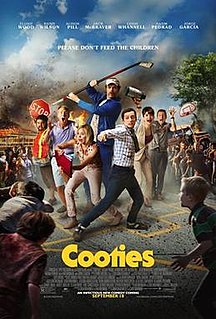 Cooties is a 2014 American horror comedy film directed by Jonathan Milott and Cary Murnion from a screenplay written by Ian Brennan and Leigh Whannell. The film stars Elijah Wood, Alison Pill, Rainn Wilson, Jack McBrayer, Whannell, Nasim Pedrad, Brennan, and Jorge Garcia as a group of elementary school employees who fight to survive an outbreak among students that turn them aggressive and cannibalistic.

Gjøl is a town on the north coast of the Limfjord in North Jutland, Denmark. It is located in Jammerbugt Municipality, 12 kilometres (7.5 mi) west of Aalborg, extending along the base of a glacial moraine. The shallow part of the fjord to the west of the ridge, Gjøl Bredning, is a wildlife preserve.