Croxley Green has changed considerably in the years since John Dickinson built paper mills in the area. The area has grown into a semi-urban community, thanks to Croxley tube station on the Metropolitan line providing connections to London's West End at Baker Street and stations through to the City at Aldgate.

The population at the 2011 Census was 12,562. [1] Croxley Green is a part of the UK Parliament constituency, South West Hertfordshire. Gagan Mohindra is the Member of Parliament since the December 2019 United Kingdom general election. [2]

The Green holds an annual village fair, the "Revels on The Green", which includes a traditional maypole dance. The revels were featured in Metro-land , the 1973 television documentary by John Betjeman, who referred to them as a tradition dating back to 1952. Since 2006, the Parish Council has organised a firework display on The Green for New Year's Eve.

In 1830, John Dickinson built Croxley Mill adjacent to the Grand Junction Canal, since 1929 part of the Grand Union Canal. John Dickinson Stationery produced Croxley Script. Dickinson Square and Dickinson Avenue are named after the paper mill owner and contain houses built by the company for their workers at the end of the 19th Century. The mill closed in 1980. [3] [4]

In 1986, Croxley Common Moor to the south of the village, OS grid reference TQ083949 , is a 39.5 hectare biological Site of Special Scientific Interest (SSSI) and Local Nature Reserve. In 2008 a group of residents were successful in gaining village green status for Buddleia Wood, a small area of woodland to the south of the village, thereby protecting the area for generations to come. The village signs were replaced in February 2008 with a scene of All Saints Church and The Green.[ citation needed ]

Train services are provided from Croxley station on the Watford branch of the London Underground Metropolitan line, providing connections to London's West End at Baker Street and stations through to the City at Aldgate. The journey is between 40 and 45 minutes to Baker Street, and 60 minutes to the terminus at Aldgate.

Croxley Green has a Residents Association and a Parish Council. There are local organisations dedicated to pastimes and leisure. The Croxley Green Society runs the "Revels", an event hosted on The Green in June/July every year. There are varying clubs including the camera, needlecraft, wine, vineyard, bicycle, jazz, and folk. Additionally there is an annual free of charge festival, called 'CroxFest', which takes place on The Green in September.

York House School is an independent preparatory day school for girls and boys aged from 3 to 13 years of age, located on Sarratt Road near Croxley Green in Redhead, an eighteenth-century mansion. The current features date variously from 1712, 1743 and 1866. [20]

The school was founded in Hampstead in 1910 by Rev. Cambridge Victor Hawkins. It relocated to Rickmansworth in the late 1940s, then moved again to its current location in 1966. [21] [22] The school motto is "Aut Viam Inveniam Aut Faciam", which is Latin for "Either I shall find a way or I shall make one". The school's alumni are referred to as Old Yorkists. [23] 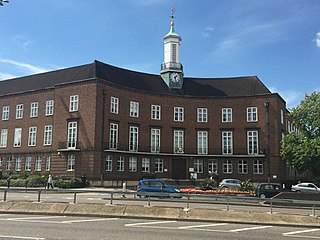 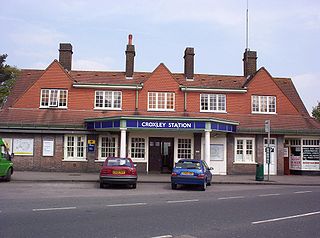 Croxley is a London Underground station located on Watford Road (A412) in Croxley Green, Rickmansworth, Hertfordshire, on the Watford branch of the Metropolitan line. It is the only intermediate station on the branch between Moor Park, on the main line from Baker Street to Amersham, and the terminus at Watford.

Watford Stadium Halt railway station was a railway station in Watford, Hertfordshire, United Kingdom on the branch line from Watford Junction to Croxley Green. It served Vicarage Road stadium, home of Watford F.C., and was open only on match days. 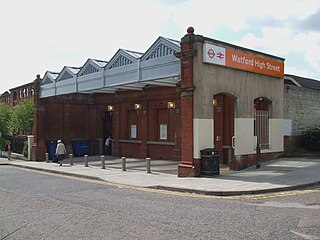 Watford High Street is a railway station in Watford, Hertfordshire, United Kingdom. It is served by the Watford DC line on the London Overground network. It is the only station on the line's sole deviation from the West Coast Main Line.

Rickmansworth School in Croxley Green, Hertfordshire, is a coeducational secondary school and a sixth form with academy status for 1,400 pupils. 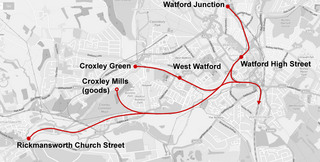 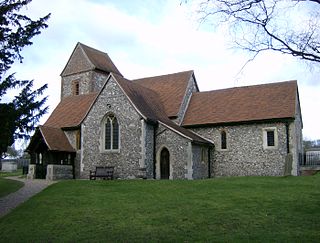 Sarratt is both a village and a civil parish in Three Rivers District, Hertfordshire, England. It is situated 4 miles (6.4 km) north of Rickmansworth on high ground near the county boundary with Buckinghamshire. The chalk stream, the River Chess, rising just north of Chesham in the Chiltern Hills, passes through Sarratt Bottom in the valley to the west of the village to join the River Colne in Rickmansworth. The conditions offered by the river are perfect for the cultivation of watercress. Sarratt has the only commercially operating watercress farm in Hertfordshire. The valley to the east of Sarratt is dry.

Rickmansworth railway station was a London and North Western Railway (LNWR) station in the town of Rickmansworth in west Hertfordshire, UK. Opened in 1862, it was the terminus of a 7.2-kilometre (4.5 mi) branch line which used to run from Watford. The station closed to passengers in 1952, although the line continued to be used as a goods line for some years after that. Church Street station has since been demolished.

The Croxley Rail Link, or the Metropolitan Line Extension, was a proposed railway engineering project in the Watford and Three Rivers districts of Hertfordshire, England, that would have connected the London Overground and the London Underground's Metropolitan line at Watford Junction. The Metropolitan line's terminus at Watford Underground station would have been closed and the line diverted and extended from Croxley to Watford Junction via a reopened section of closed line. The main proponent of the scheme was Hertfordshire County Council but it failed to win the support of Transport for London (TfL) which owns the Watford branch. The engineering works would have consisted of the realignment of the disused Watford and Rickmansworth Railway's line between Croxley Green and Watford High Street, with the construction of a viaduct over the Grand Union Canal, River Gade and A412 road and two new stations before branching into the London Overground line near Watford High Street and continuing to Watford Junction.

Croxley Green Windmill is a Grade II listed tower mill at Croxley Green, Hertfordshire, England which has been converted to residential accommodation.