The Euro step, two-step, or long lateral is a basketball move in which an offensive player picks up their dribble, takes a step in one direction, and then quickly takes a second step in another direction. It is intended to allow the offensive player to evade a defender and attack the basket.

According to The New York Times writer Jonathan Abrams, [1]

The move is a crafty way to distribute the two steps allocated to a player after he stops dribbling, and it goes right to the edge of being a traveling violation.

Anecdotal reports indicate that officials not familiar with the move may call it a traveling violation. [2] Today, the Euro step is often used when a player drives to the hoop, and it can be especially effective when a shorter guard takes on a taller forward or center. In a 2018 ESPN.com story on the move, writer Jordan Brenner said, "It has changed the way players navigate the defense to reach the rim and, with it, the game of basketball itself," also adding that the move "would end up altering the very balance of power between penetrator and defender." [3]

While the first confirmed media usage of the term "Euro step" was not seen until 2007, the move has a decades-long history in European basketball. In Brenner's 2018 story, he noted that longtime coach Vlade Đurović had seen early versions of the move around 1960. Đurović himself said in the story, "That move was normal in Europe, especially in Yugoslavia." [3] The move was first brought into the NBA in 1989, primarily by Šarūnas Marčiulionis, now generally accepted as the league's first practitioner of the move. The move was further popularized in North America in the 2000s by Manu Ginóbili, who arrived in the NBA from the Italian league, though Ginobili honed the move while playing on playgrounds in his native Argentina. It has since been adopted by many American-born players, among them James Harden and Dwyane Wade. [1] According to Brenner, the physical gifts of another European player, Giannis Antetokounmpo, have led his version of the Euro step to become "the final phase of the move's evolution," adding: [3]

A FiveThirtyEight study showed that he covers just over 15 feet off a single dribble when driving to the basket. Add that to his 7-foot-3 wingspan and he can start his Eurostep from the 3-point line. . . . James Naismith never could've envisioned two steps like Antetokounmpo's. Two steps that cover 15 feet. Two steps that render the area between the top of the key and the basket all but undefendable. The Greek Freak and others have weaponized footwork by stretching the rules to their limit. In doing so, they have fundamentally changed the way basketball is played and how we see it.

While the Euro step was in common use in the NBA before 2009, it did not become technically legal until 2009. Prior to 2009 the NBA rule book had always said a player could only take one step. In 2009 it changed to read "A player who receives the ball while he is progressing or upon completion of a dribble, may take two steps in coming to a stop, passing or shooting the ball." When the change was made, ESPN noted "It is believed to be the first time any league, at any level anywhere in the world, has explicitly allowed two steps." [4] 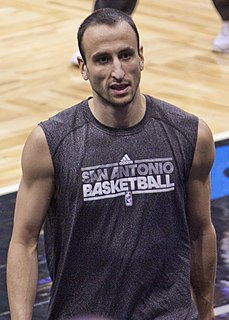 Emanuel "Manu" David Ginóbili is an Argentine former professional basketball player. Over a 23-season professional career, he became one of only two players to have won a EuroLeague title, an NBA championship, and an Olympic gold medal. A four-time NBA champion, Ginóbili was a member of the San Antonio Spurs for his entire NBA career. Along with Spurs teammates Tim Duncan and Tony Parker, he was known as one of the "Big Three". 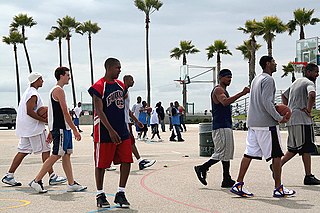 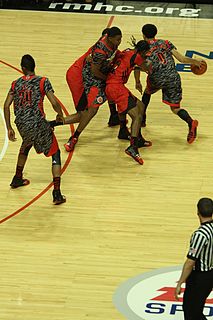 Giannis Sina Ugo Antetokounmpo is a Greek professional basketball player for the Milwaukee Bucks of the National Basketball Association (NBA). Born in Greece to Nigerian parents, Antetokounmpo began playing basketball for the youth teams of Filathlitikos in Athens. In 2011, he began playing for the club's senior team before entering the 2013 NBA draft, where he was selected 15th overall by the Bucks. Antetokounmpo's nationality, in addition to his combination of size, speed and ball-handling skills earned him the nickname "Greek Freak". 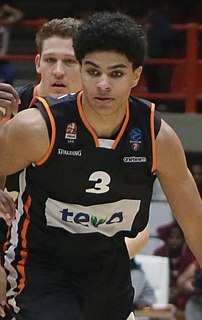