The four corners offense, technically four corner stall, is an offensive strategy for stalling in basketball. Four players stand in the corners of the offensive half-court while the fifth dribbles the ball in the middle. Most of the time the point guard stays in the middle, but the middle player would periodically switch, temporarily, with one of the corner players. It was a strategy that was used in college basketball before the shot clock was instituted.

The team running the offense typically would seek to score, but only on extremely safe shots. The players in the corners might try to make backdoor cuts, or the point guard could drive the lane.

Even if the team wanted to hold the ball until the end of the game, some such strategy was necessary since the rules did not (and still do not) let a player hold the ball for more than five seconds while closely guarded. So some mechanism to facilitate safe passes would be needed, which the four corners provided. There were other slowdown strategies, but the four corners was the most well known.

It was most frequently used to retain a lead by holding on to the ball until the clock ran out. The trailing team would be forced to spread their defense in hopes of getting a steal, which often allowed easy drives to the basket. Sometimes it was used throughout the game to reduce the number of possessions in hopes of getting an upset against a stronger team. [1]

The "5 seconds closely guarded" rule was originally introduced partly to prevent stalling, and other rule changes were made to the college rules through the 1970s in hopes of eliminating stalling without using a shot clock as the National Basketball Association had since the 1954–55 season. [2] (Thus, the four corners has always been a strategy of high school and college basketball.) There was a perception that the NBA shot clock did not allow time to work the ball to get a good shot, and that it would reduce the opportunity for varied styles of play.

The offense was created by head coach (Neal Baisi of WV Tech fame in the mid-1950s) John McClendon, and popularized (at the Div.1 level) by longtime University of North Carolina at Chapel Hill head coach Dean Smith in the early 1960s. He used it to great effect under point guard Phil Ford; it was during his career that some writers referred to the offense as the "Ford Corners." [3]

However, by the 1980s, fans were fed up. In the nationally televised 1982 ACC championship game between the University of North Carolina Tar Heels and the University of Virginia Cavaliers, UNC held the ball for roughly the last seven minutes of the second half to nurse a small lead, eventually winning 47–45. [4] This style of offense was so distinctive that a local restaurant-bar in Chapel Hill, NC, was called Four Corners in homage to Smith, a local hero. [5]

The next year, the ACC and other conferences introduced a shot clock experimentally, along with a three-point line to force the defense to spread out. In 1985, the National Collegiate Athletic Association adopted a shot clock nationally and added the 3-pointer a year later. [4]

On February 21, 2015 the Tar Heels, coached by Smith protege Roy Williams, successfully ran the offense on the opening possession against the Georgia Tech Yellow Jackets as a tribute to the recently deceased Smith. [6]

Dean Edwards Smith was an American men's college basketball head coach. Called a "coaching legend" by the Basketball Hall of Fame, he coached for 36 years at the University of North Carolina at Chapel Hill. Smith coached from 1961 to 1997 and retired with 879 victories, which was the NCAA Division I men's basketball record at that time. Smith had the ninth-highest winning percentage of any men's college basketball coach (77.6%). During his tenure as head coach, North Carolina won two national championships and appeared in 11 Final Fours. Smith played college basketball at the University of Kansas, where he won a national championship in 1952 playing for Hall of fame coach Phog Allen. 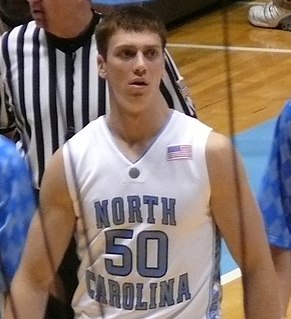 Andrew Tyler Hansbrough is an American professional basketball player for the Sichuan Blue Whales of the Chinese Basketball Association (CBA). 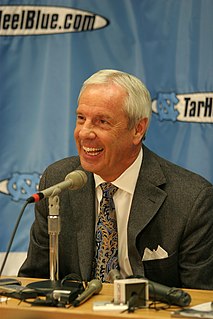 Roy Allen Williams is an American college basketball coach for the North Carolina Tar Heels. He started his college coaching career at North Carolina as an assistant coach for Dean Smith in 1978. In 1988, Williams became the head coach of the men's basketball team at Kansas, taking them to 14 consecutive NCAA tournaments, four final four appearances, two national championship game appearances, collecting a .805 win percentage and winning nine conference titles over his fifteen-year span.

The Carolina-Duke rivalry refers to the sports rivalry between the University of North Carolina Tar Heels and Duke University Blue Devils, particularly in the sport of basketball. It is considered one of the most intense rivalries in all of US sports: a poll conducted by ESPN in 2000 ranked the basketball rivalry as the third greatest North American sports rivalry, and Sports Illustrated on Campus named it the #1 "Hottest Rivalry" in college basketball and the #2 rivalry overall in its November 18, 2003 issue. The intensity of the rivalry is augmented for many reasons. One reason is by the proximity of the two universities—they are located only ten miles apart along U.S. Highway 15–501 or eight miles apart in straight-line distance. In addition, Duke is a private university whereas Carolina is a public school; the vastly different funding structures and cultures between the two further contribute to the intensity of the rivalry. However one of biggest reasons for this rivalry lies in their respective basketball programs. Almost every year at least one of the schools is a contender to win the national championship from consistently having some of the most elite players in the game.

The Virginia Cavaliers men's basketball team is the intercollegiate men's basketball program representing the University of Virginia. The school competes in the Atlantic Coast Conference in Division I of the National Collegiate Athletic Association. Virginia has won one NCAA Championship, two National Invitation Tournaments, and three ACC Tournament titles. The team is coached by Tony Bennett and plays home games at the on-campus John Paul Jones Arena (14,593) which opened in 2006. They have been called the Cavaliers since 1923, predating the Cleveland Cavaliers of the NBA by half a century.

Eddie Fogler is an American retired college basketball player and coach. He played for the University of North Carolina from 1967 to 1970 where he played as a point guard on two NCAA Final Four teams. Fogler was an All-City guard at Flushing High School in Flushing, New York.

Sylvia Rhyne Hatchell is a former American women's basketball coach, who last coached for the University of North Carolina at Chapel Hill and was the fifth with the most career wins in NCAA women's basketball history, behind former Tennessee coach Pat Summitt, Stanford coach Tara VanDerveer, and UConn coach Geno Auriemma. She competed with USA Basketball as the head coach of the 1994 Jones Cup Team that won the gold in Taipei. Hatchell was inducted into the Women's Basketball Hall of Fame in 2004.

Harrison Bryce Jordan Barnes is an American professional basketball player who plays for the Sacramento Kings of the National Basketball Association (NBA). He played college basketball for the North Carolina Tar Heels before being selected by the Golden State Warriors in the first round of the 2012 NBA draft with the seventh overall pick. Barnes won an NBA championship with the Warriors in 2015.

The 2011 North Carolina Tar Heels football team represented the University of North Carolina at Chapel Hill in the 2011 NCAA Division I FBS football season. The team was led by interim head coach Everett Withers and played their home games at Kenan Memorial Stadium, and members of the Atlantic Coast Conference in the Coastal Division. The Tar Heels finished the season 7–6, 3–5 in ACC play to finish tied for fourth in the Coastal Division, and were invited to the Independence Bowl where they were defeated by Missouri, 24–41.

The 2017 Georgia Tech Yellow Jackets football team represented the Georgia Institute of Technology during the 2017 NCAA Division I FBS football season. The Yellow Jackets were led by tenth-year head coach Paul Johnson and played their home games at Bobby Dodd Stadium. They competed as a member of the Coastal Division in the Atlantic Coast Conference. They finished the season 5–6, 4–4 in ACC play to finish in third place in the Coastal Division.

The 1982–83 North Carolina Tar Heels men's basketball team represented University of North Carolina in the 1982–83 NCAA Division I men's basketball season as a member of the Atlantic Coast Conference. They finished the season 28–8 overall, tied for the ACC regular season title with a 12–2 record and made it to the Elite Eight of the 1983 NCAA Tournament. They were coached by Dean Smith in his twenty-second season as head coach of the Tar Heels. They played their home games at the Carmichael Auditorium in Chapel Hill, North Carolina.