Slashers usually take more free-throw shots than other players due to the increased amount of contact made on them as they constantly and aggressively run towards the basket. Many different kinds of slashers gain extra free-throws by "drawing fouls", which is deliberately causing contact with a defending player. They may spend many hours working on increasing their free-throw percentage. [1]

Many players who begin as slashers typically develop their game (especially their jump shot), as age and injuries occur, which may prevent them from being as effective as a slasher (for example, Michael Jordan and Kobe Bryant both developed a fadeaway jump shot as they got older). [2]

The shooting guard (SG), also known as the two, two guard or off guard, is one of the five traditional positions in a regulated basketball game. A shooting guard's main objective is to score points for their team and steal the ball on defense. Some teams ask their shooting guards to bring up the ball as well; these players are known colloquially as combo guards. A player who can switch between playing shooting guard and small forward is known as a swingman. In the NBA, shooting guards usually range from 6' 3" to 6' 7”.

Twenty-one, also called 33, Cali, Oak, 35, American, cutthroat, hustle, tip-it, noyceball, roughhouse, scutter,rough, rebound or scramble is a popular variation of street basketball. The game is played with any number of players on a half court, but typically when not enough players are available to at least play three-on-three. Twenty-one is an individual game that does not utilize team play. In some settings, it is considered a brutal game, as fouling is legal and thus some games can become violent and full-contact. However, the game's basic rules can be enjoyed by anyone, as most games are non-violent.

The player efficiency rating (PER) is John Hollinger's all-in-one basketball rating, which attempts to boil down all of a player's contributions into one number. Using a detailed formula, Hollinger developed a system that rates every player's statistical performance. 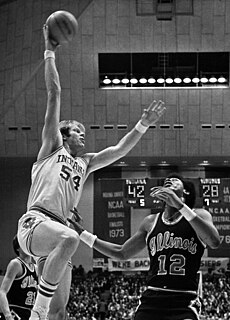 The Los Angeles Lakers franchise has a long and storied history, predating the formation of the National Basketball Association (NBA). 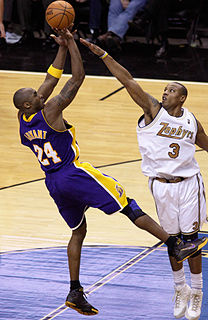 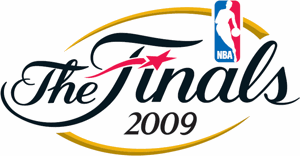 The 2009 NBA Finals was the National Basketball Association (NBA)'s championship series for the 2008–09 season. The best-of-seven playoff was contested between the Western Conference champion Los Angeles Lakers, and the Eastern Conference champion Orlando Magic. The Lakers defeated the Magic, four games to one, to win the franchise's 15th NBA championship. The 63rd edition of the championship series was played between June 4 and June 14 and was broadcast on U.S. television on ABC. 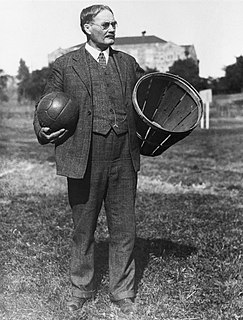