In basketball, run and gun is a fast, freewheeling style of play that features a high number of field goal attempts, resulting in high-scoring games. [1] [2] [3] The offense typically relies on fast breaks while placing less emphasis on set plays. [2] [4] A run-and-gun team typically allows many points on defense as well. [4] [5]

In the National Basketball Association (NBA), the run and gun was at its peak in the 1960s when teams scored an average of 115 points a game. Around 2003, the average had dropped to 95. [6] The Boston Celtics were a run-and-gun team in the 1950s and 1960s while winning 11 NBA championships, as were the five-time champion Los Angeles Lakers during their Showtime era in the 1980s. [3] [7]

Although the run and gun is believed by many to de-emphasize defense, the Celtics of the 60s' had Bill Russell, and the Lakers of the 80s' had Kareem Abdul-Jabbar as defensive stoppers. [3] Coach Doug Moe, who ran the run and gun with the Denver Nuggets in the 1980s, believed the high scores surrendered were more indicative of the fast pace of the game than a low level of defense. Still, his teams sometimes appeared to give up baskets in order to score one. Though his offensive strategy led to high scores, Moe's Denver teams were never adept at running fast breaks. [5]

Paul Westhead coached the Loyola Marymount men's basketball team in the late 1980s using a version of the run and gun. [8] While run and gun basketball is often thought of as a system of offense, Westhead's system uses a combined offensive and defensive philosophy. Offensively, the team moves the ball forward as quickly as possible and takes the first available shot, often a three-pointer. Westhead's teams try to shoot the ball in less than seven seconds. The aim is to shoot before the defense is able to get set. Defensively, the team applies constant full-court pressure. Generally, the team is willing to gamble on giving away easy baskets for the sake of maintaining a high tempo. [8]

Loyola Marymount successfully used the system in 1990 when they advanced to the Elite 8 of the NCAA Basketball Tournament, beating the defending champion Michigan 149–115 along the way. The style has been used at some other teams. Coach Westhead tried, rather unsuccessfully, to implement the system in the NBA with the Denver Nuggets in the early 1990s. They averaged a league-best 119.9 points per game in 1990-91, but also surrendered an NBA record 130.8 points per game. They also allowed 107 points to be scored in a single half to the Phoenix Suns, which also remains an NBA record.

Westhead's system has been imitated by other college teams, including Grinnell College. David Arseneault, the architect of the Grinnell System, added to Westhead's system by substituting players in three waves of five players, similar to an ice hockey shift. [9] [10] The highest scoring game in NCAA history was played by two teams (Troy & DeVry-Atlanta) who both employed Westhead's system the entire game, resulting in 399 combined points in 1992. [11] 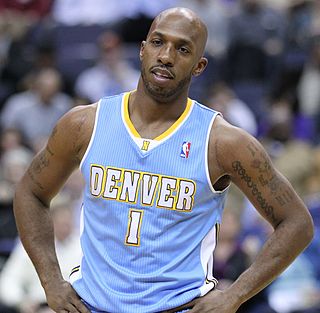 Chauncey Ray Billups is an American professional basketball coach and former player who serves as assistant coach for the Los Angeles Clippers of the National Basketball Association (NBA). He played 17 seasons in the NBA. After playing college basketball with the Colorado Buffaloes, he was selected third overall in the 1997 NBA draft by the Boston Celtics. A five-time NBA All-Star and a three-time All-NBA selection, Billups played for the Celtics, Toronto Raptors, Denver Nuggets, Minnesota Timberwolves, Detroit Pistons, New York Knicks, and Los Angeles Clippers during his NBA career. He won the NBA Finals MVP in 2004 after helping the Pistons beat the Los Angeles Lakers in the Finals, and was given the nickname "Mr. Big Shot" for making late-game shots with Detroit. The Pistons retired his No. 1 jersey in 2016.

Carmelo Kyam Anthony is an American professional basketball player for the Portland Trail Blazers of the National Basketball Association (NBA). He has been named an NBA All-Star ten times and an All-NBA Team member six times. He played college basketball for the Syracuse Orange, winning a national championship as a freshman in 2003 while being named the NCAA Tournament's Most Outstanding Player.

Douglas Edwin Moe is an American former professional basketball player and coach. As a head coach with the Denver Nuggets in the National Basketball Association (NBA), he was named the NBA Coach of the Year in 1988.

Robert Clyde Jones is an American former professional basketball player who played for the Denver Nuggets in the American Basketball Association (ABA) and National Basketball Association (NBA) and the Philadelphia 76ers in the NBA. Nicknamed "the Secretary of Defense", Jones won an NBA championship with the 76ers in 1983, was a 4-time NBA All-Star, an 11-time member of the NBA All-Defensive Team, and was the NBA Sixth Man of the Year in 1983. 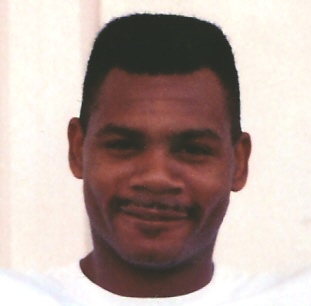 Eric Wilson "Hank" Gathers Jr. was an American college basketball player for the Loyola Marymount Lions in the West Coast Conference (WCC). As a junior in 1989, he became the second player in NCAA Division I history to lead the nation in scoring and rebounding in the same season. Gathers was a consensus second-team All-American as a senior in 1990. His No. 44 was retired by the Lions, who also placed a statue of him in his honor outside their home arena Gersten Pavilion.

Gregory Kevin "Bo" Kimble is an American former professional basketball player in the National Basketball Association (NBA). He played college basketball for the Loyola Marymount Lions. As a senior in the 1989–90 season, Kimble was named a consensus second-team All-American as well as the West Coast Conference Player of the Year. He led the 11th-seeded Lions to the regional finals of the NCAA Tournament after the death of teammate Hank Gathers. Kimble was selected by the Los Angeles Clippers in the first round of the 1990 NBA draft with the eighth overall pick. He played three seasons in the NBA with the Clippers and the New York Knicks

The 1990 NCAA Division I Men's Basketball Tournament involved 64 schools playing in single-elimination play to determine the national champion of NCAA Division I men's college basketball. It began on March 15, 1990, and ended with the championship game on April 2 in Denver, Colorado. A total of 63 games were played.

Corey Yasuto Gaines is an American professional basketball coach and former player who is an assistant coach for the Washington Wizards of the National Basketball Association (NBA). He played five seasons in the NBA, and was a four-time Israeli Premier League Assists Leader, in 1999 and in 2001 to 2003. He was also a former head coach of the Phoenix Mercury of the Women's National Basketball Association (WNBA).

Kevin Bradshaw is an American former professional basketball player and current collegiate basketball coach. He is best known as the NCAA record-holder for most points in a single game against a Division I opponent.

The Grinnell System, sometimes referred to as The System, is a fast-tempo style of basketball developed by coach David Arseneault at Grinnell College. It is a variation of the run-and-gun system popularized by coach Paul Westhead at Loyola Marymount University in the early 1980s. The Grinnell System relies on shooting three-point field goals, applying constant pressure with a full-court press, and substituting players frequently.

The 1992 Troy State vs. DeVry men's basketball game is the highest-scoring men's basketball game in National Collegiate Athletic Association (NCAA) history, regardless of division classification. On January 12, 1992, Troy State University, now known as Troy University, defeated DeVry University of Atlanta 258–141 in a game that is considered to have established several unbreakable records.