The pick and roll (also called a ball screen or screen and roll) in basketball is an offensive play in which a player sets a screen (pick) for a teammate handling the ball and then moves toward the basket (rolls) to receive a pass. In the NBA, the play came into vogue in the 1990s and has developed into the league's most common offensive action. [1] There are however many ways in which the defense can also counter the offensive screen.

A successful pick and roll play may result in the screener being in position to receive a pass with a clear path for an easy shot, with the chance of drawing a foul as other defenders move toward the play to try to prevent penetration. It may alternately lead to the ballhandler being momentarily without a defender, and thus free to pass to any open teammate, or take an uncontested shot, which greatly improves the chance of scoring, again with the chance of drawing a foul as the screened defender hurries to get back into the play.

The success of the strategy depends largely on the ballhandler, who must recognize the situation quickly and make a decision whether to take the shot, pass to the screener who is rolling (if the defender switches) or pass to another open teammate (if other defenders come to help). [2] The screener also must recognize the open spaces of the court to roll to and be alert to receive the pass and finish the play.

The pick and pop is an offensive play that is a derivative of the classic pick and roll. Instead of rolling toward the basket, however, the player setting the pick moves ("pops") to an open area of the court to receive a pass from the ballhandler for a jump shot.

The premise of the two plays is the same: a ballhandler uses a teammate's pick to attract the attention of two defensive players to free his teammate for a scoring opportunity. A successful pick and pop relies on a ballhandler who demands constant defensive attention and a teammate with an accurate jumpshot or a layup if by the rim.

In the NBA, John Stockton and Karl Malone of the Utah Jazz used this play to great effect in the 1990s, [2] leading their team to the NBA Finals in 1997 and 1998. Stockton, a point guard, was a good shooter and exceptional decision maker and Malone, a power forward, was a great finisher. When they were teammates on the Phoenix Suns, Steve Nash and Amar'e Stoudemire also utilized the high-screen pick and roll to great success. [1] [4] The Golden State Warriors' combination of point guard Stephen Curry and power forward Draymond Green are noted for their use of a stutter step high pick-and-roll set: Curry's long-range shooting ability often traps him in situations where the opposing team will attempt to double up their defenders against Steph. Curry will pass to Green as he rolls out of the screen, allowing Green to lead a 4-on-3 offense with the option to pass to wing shooters, lob an alley-oop or drive to the basket. [5]

The pick and roll is also used extensively in box lacrosse, the sport played in the National Lacrosse League. 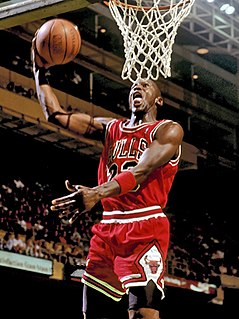 The shooting guard (SG), also known as the two, two guard or off guard, is one of the five traditional positions in a regulated basketball game. A shooting guard's main objective is to score points for their team and steal the ball on defense. Some teams ask their shooting guards to bring up the ball as well; these players are known colloquially as combo guards. A player who can switch between playing shooting guard and small forward is known as a swingman. In the NBA, shooting guards usually range from 6' 3" to 6' 7”. 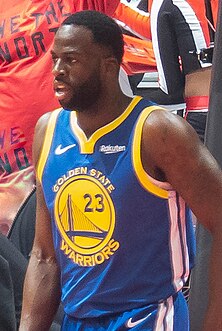 Draymond Jamal Green Sr. is an American professional basketball player for the Golden State Warriors of the National Basketball Association (NBA). Green, who plays primarily at the power forward position, is a three-time NBA champion and a three-time NBA All-Star. In 2017, he won the NBA Defensive Player of the Year. 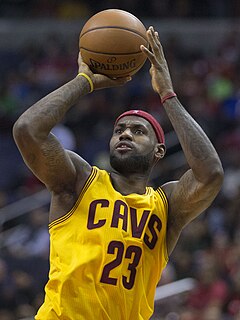