In addition to those markings, leagues and governing bodies often place other decals on the edge of the backboard on the glass, including the logo of the league or organization, and a national flag. On top of the backboard, a league or team's web address or sponsor logo is affixed to take advantage of the high television camera angle utilized for instant replay of slam dunks and other shots above the rim.

In professional and most higher college settings, the backboard is part of a portable stanchion that can be moved out of the way and stored to allow the venue to host multiple other sports and events, though in most high schools and examples such as Stanford University's Maples Pavilion, backboards are mounted as part of a suspended system using ceiling joists to support the goal and allow them to be put out of the way in the ceiling support system when not in use, along with the more common wall-mounted system. Practice or gym class-utilized sideline backboards are generally of the wall-mounted variety, and usually have opaque fiberglass or thick metal boards instead, along with most outdoor municipal park boards.

The first glass backboard was used by the Indiana Hoosiers men's basketball team at the Men's Gymnasium at Indiana University. [3] After the first few games at their new facility in 1917, spectators complained that they could not see the game because of opaque wooden backboards. As a result the Nurre Mirror Plate Company in Bloomington was employed to create new backboards that contained 1 1⁄2-inch-thick (3.8 cm) plate glass so that fans could see games without an obstructed view. It was the first facility in the country to use glass backboards. [3]

Professional glass backboards used to break from 625 pounds (283 kg) of force or more. Modern professional and higher-level college play backboards do not have the glass absorbing any weight to avoid breaking the glass and backboard as a whole. [4]

The Continental Basketball Association (CBA) was a men's professional basketball minor league in the United States from 1946 to 2009. 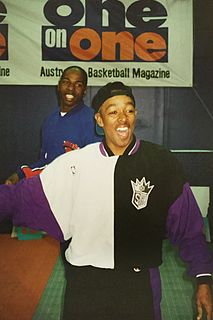 Michael Anthony Jerome "Spud" Webb is an American retired professional basketball player. Webb, who played in the National Basketball Association (NBA), is known for winning a Slam Dunk Contest despite being one of the shortest players in NBA history. NBA.com lists him at 5 feet 7 inches (170 cm) tall. Other references list him as 5 feet 6 inches. He is currently the president of basketball operations for the Texas Legends, the G League team for the Dallas Mavericks in Frisco, Texas. 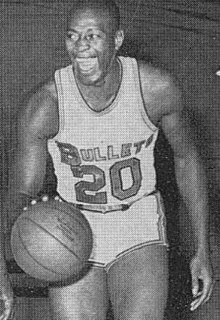 Gus Johnson Jr. was an American professional basketball player in the National Basketball Association (NBA). A 6 ft 6 in (1.98 m), 235-pound (107 kg) forward–center, he spent nine seasons with the Baltimore Bullets, and his final season was split between the Phoenix Suns and the Indiana Pacers of the ABA.

Ralph Anthony Lawler is an American former television and radio personality. Lawler is best known for his 41-year tenure as the voice of the National Basketball Association's Los Angeles Clippers. Going back to the franchise's six-year stint in San Diego (1978–84), Lawler has broadcast virtually every Clippers game since the franchise moved from Buffalo, New York in 1978, whether it be radio and/or television. There were only two seasons when Lawler did not serve as the team's primary play-by-play broadcaster: 1981–82 and 1984–85 ; Lawler returned as the full-time voice in 1985–86. In 2019, Lawler was inducted into the Naismith Memorial Basketball Hall of Fame.

Oliver J. Miller is an American former professional basketball player. He played college basketball at the University of Arkansas and was drafted by the Phoenix Suns in 1992. After his initial stint in the NBA from 1992 to 1998, where he became the heaviest player in league history, Miller played overseas and for semi-professional American teams. He returned to the NBA for the 2003–04 season, but transitioned back to minor-league and semi-professional play until 2010. 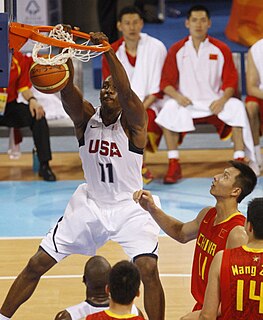 The Men's Gymnasium is an on-campus indoor athletic facility on the campus of Indiana University in Bloomington, Indiana. From 1917–1928 it also served as the home of the Indiana Hoosiers men's basketball team.

The Horner House is a historic house at 2 Merrivale Street in Beverly Shores, Indiana. It is an excellent example of the mid-twentieth century architectural movement known as the International Style, interpreted by architects like Marcel Breuer, Ludwig Mies van der Rohe, Walter Gropius and Philip Johnson for buildings constructed in America following World War II. It is the work of a master artist of the second generation to be influenced by this school, the Swiss architect and designer, Otto Kolb.