With the match-up zone defense, the on-ball defender will play tight as if he was playing man-to-man. At the same time, the zone away from the ball will resemble "help-side" man-to-man defense. This creates one of the advantages for the match-up zone, as it may confuse the opponent as to what defense you are actually playing. The match-up zone also resembles a "switching man-to-man" defense, where the big men stay down low in the post and the guards stay around the perimeter. When asked to describe Chaney's match-up zone, Saint Joseph's Hawks coach Phil Martelli replied: "In college basketball, there's the Pete Carril Princeton offense, the John Chaney Match up Zone defense, then everything else. Those are the only two truly unique syles designed and being used today."

The Saint Joseph's Hawks men's basketball team represents Saint Joseph's University, Philadelphia, Pennsylvania. The program is classified in the NCAA's Division I, and the team competes in the Atlantic 10 Conference. Saint Joe's competes as well as part of the Philadelphia Big 5. Saint Joseph's home court is the Hagan Arena. The team is coached by Billy Lange, who was hired on March 28, 2019 after Phil Martelli was fired as Head Coach on March 19, 2019 after 24 seasons of coaching the Hawks. 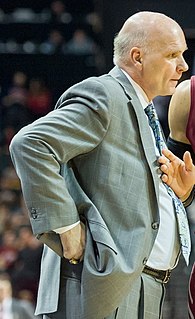 Peter Joseph Carril is an American former basketball coach. He is best known for his time as head coach of Princeton University for 30 years and his use of the 'Princeton offense'. He also coached at Lehigh University and in the NBA as an assistant with the Sacramento Kings.

A cornerback (CB), also referred to as a corner or defensive halfback in older parlance, is a member of the defensive backfield or secondary in American and Canadian football. Cornerbacks cover receivers most of the time, to defend against offensive plays, i.e. create turnovers in best case or deflect a forward pass or rather make a tackle. Other members of the defensive backfield include the safeties and occasionally linebackers. The cornerback position requires speed, agility, and strength. A cornerback's skillset typically requires proficiency in anticipating the quarterback, backpedaling, executing single and zone coverage, disrupting pass routes, block shedding, and tackling. Cornerbacks are among the fastest players on the field.

Henry Payne Iba was an American basketball coach and college athletics administrator. He served as the head basketball coach at Northwest Missouri State Teacher's College, now known as Northwest Missouri State University, from 1929 to 1933; the University of Colorado Boulder from 1933 to 1934; and the Oklahoma State University–Stillwater, known as Oklahoma A&M prior to 1957, from 1934 to 1970, compiling a career college basketball coaching record of 751–340. He led Oklahoma A&M to consecutive NCAA Basketball Tournament titles, in 1945 and 1946. Iba was also the athletic director at Oklahoma A&M / Oklahoma State from 1935 to 1970 and the school's head baseball coach from 1934 to 1941, tallying a mark of 90–41. As head coach of the United States men's national basketball team, he led the U.S. to the gold medals at the 1964 and 1968 Summer Olympics. Iba was inducted into the Naismith Memorial Basketball Hall of Fame in 1969.