The time line, in basketball, is a name for the center line that reflects the rule that the offensive team has a limited amount of time to advance the ball past this line, from the backcourt to the frontcourt, in a scoring drive.

The rule was introduced in 1933. It was basketball's first time restriction on possession of the ball, predating the shot clock by over two decades. FIBA and the NBA specified 10 seconds, but adopted an 8-second limit in 2000 and 2001, respectively.

Analogs in other sports

In field lacrosse, a team has 20 seconds to get the ball across the midfield line any way it can, and then 10 seconds to get the ball into its opponents' goal box. To satisfy the latter limit it is not necessary that a player in possession of the ball enter the box; although that is the most common way of doing so, that count is ended if the ball simply touches the ground inside the box. Officials typically use a timer for the 20-second count, as they may also at the same time be counting the four seconds a defensive player is allowed to stay in the goal crease with the ball, and count off the ten seconds manually. 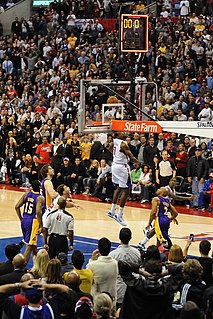 In basketball and other such timed sports, a buzzer beater is a shot that is taken before the game clock of a quarter, a half, or an overtime period expires but does not go in the basket until after the clock expires and the buzzer sounds. The concept normally applies to baskets that beat an end-of-quarter/half/overtime buzzer but is sometimes applied to shots that beat the shot clock buzzer.

The Trent Tucker Rule is a basketball rule that disallows any regular shot to be taken on the court if the ball is put into play with under 0.3 seconds left in game or shot clock. The rule was adopted in the 1990–91 season and named after New York Knicks player Trent Tucker, and officially adopted in FIBA play starting in 2010. When the WNBA was established in 1997, this rule was adopted too.