Zone defense is a type of defense, used in team sports, which is the alternative to man-to-man defense; instead of each player guarding a corresponding player on the other team, each defensive player is given an area (a zone) to cover.

A zone defense can be used in many sports where defensive players guard players on the other team. Zone defenses and zone principles are commonly used in association football, American football, Australian rules football, basketball, ice hockey, lacrosse, netball and ultimate among others.

Match-up zone is a hybrid man-to-man and zone defense in which players apply man-to-man defense to whichever opposing player enters their area. John Chaney, former head coach of Temple University, is the most famous proponent of this defense. [2] Hybrid defenses also include Box-and-one, in which four defenders are in a 2–2 zone and one defender guards a specific player on the offense. A variant of this is triangle-and-two, in which three defenders are in a 2–1 zone and two defenders guard two specific offensive players.

Zone defenses are common in international, college, and youth competition. In the National Basketball Association, zone defenses were prohibited until the 2001–2002 season, and most teams do not use them as a primary defensive strategy. The NBA has a defensive three-second violation rule which was also introduced with the 2001–2002 season, which makes it more difficult for teams to play zone, since such defenses usually position a player in the middle of the key to stop penetration. [3] The Dallas Mavericks under coach Rick Carlisle are an example of an NBA team that have regularly used zone defenses.

Frank Lindley, Newton (Kansas) High School basketball coach from 1914 to 1945, was among the first to use the zone defense and other innovations in the game and authored numerous books about basketball. He finished his career with a record of 594–118 and guided the Railroaders to ten state titles and seven second-place finishes. Jim Boeheim, coach of the Syracuse Orange men's basketball team, is famous for using a 2–3 zone that is among the best in the NCAA. His zone, which typically features athletic, disruptive, and aggressive defenders, has become a prototype for use on other teams including the United States men's national basketball team, where he has spent time as an assistant coach.

Some of the reasons for using a zone defense are:

Playing a zone entails some risks.

While strategies for countering zone defenses vary and often depend on the strengths and weaknesses of both the offensive and defensive teams, there are some general principles that are typically used by offensive teams when facing a zone.

The zone defence tactic, borrowed from basketball, was introduced into Australian football in the late 1980s by Robert Walls and revolutionized the game. It was used most effectively by Essendon Football Club coach Kevin Sheedy.

The tactic is used from the fullback kick in after a behind is scored. The side in opposition to the player kicking in places their forward players, including their full-forward and centre half forward, in evenly spaced zones in the back 50-metre arc. This makes it easier for them to block leading players and forces the kick-in to be more precise, in effect increasing the margin for error which can cause a turnover and another shot at goal. As a result, the best ways to break the zone are for the full-back to bomb it long (over 50 meters), often requiring a low percentage torpedo punt, or to play a short chipping game out of defence and then to switch play as opposition players break the zone. The latter has negated the effectiveness of the tactic since the 1990s.

Another kick-in technique is the huddle , often used before the zone, which involves all of the players from the non-kicking team huddling together and then breaking in different directions. The kicker typically aims in whichever direction the designated target (typically the ruckman) runs in.

In lacrosse, a zone defense is not as often as the normal man defense. It has been used effectively at the D-III level by schools such as Wesleyan University. They almost always use a 6-man “backer” zone, where they have three guys up top and three guys down low and they try to stay in their zone and not rotate as much as possible. [4] When teams are man down, many teams employ a “box and one” zone defense, where the four outside players stay in their designated zone while the fifth player follows the ball while staying on the crease man. [5]

Netball is a sport similar to basketball with similar strategies and tactics employed, although with seven players per team. Zone defense is one of the main defensive strategies employed by teams, along with one-on-one defense. Common variants include center-court block, box-and-two zone, diamond-and-two zone, box-out zone and split-circle zone. [6]

Ultimate allows for a number of zone defence tactics, usually employed in poor (such as windy, rainy or snowy) conditions, to discourage long passes and slow the progress of the opposition's movement.

Team tactics as well as individual skills are necessities for playing association football. Football is in theory a very simple game, illustrated by Kevin Keegan's namely assertion that his tactics for winning a match were to "score more goals than the opposition". Tactical prowess within the sport is nevertheless a craftsmanship of its own, and one of the reasons why managers are paid well on the elite level. Well-organised and ready teams are often seen beating teams with more skillful players on paper. Manuals and books generally cover not only individual skills but tactics as well.

The pick and roll in basketball is an offensive play in which a player sets a screen (pick) for a teammate handling the ball and then moves toward the basket (rolls) to receive a pass. In the NBA, the play came into vogue in the 1990s and has developed into the league's most common offensive action. There are, however, many ways in which the defense can also counter the offensive screen.

In the sport of basketball, five players play per team, each assigned to positions. Historically, these players have been assigned, to positions defined by the role they play on the court, from a strategic point of view. The three main positions are guard, forward, and center, with the standard team featuring two guards, two forwards, and a center. Over time, as more specialized roles developed, each of the guards and forwards came to be differentiated, and today each of the five positions are known by unique names, each of which has also been assigned a number: point guard (PG) or 1, the shooting guard (SG) or 2, the small forward (SF) or 3, the power forward (PF) or 4, and the center (C) or 5.

Man-to-man defense, or man defense, is a type of defensive technique used in team sports such as American football, association football, basketball, and netball, in which each player is assigned to defend and follow the movements of a single player on offense. Often, a player guards his counterpart, but a player may be assigned to guard a different position. However, the strategy is not rigid, and a player might switch assignment if needed, or leave his own assignment for a moment to double team an offensive player. The term is commonly used in both men's and women's sports. The alternative to man-to-man defense is zone defense, a system of defense in which each player guards an assigned area rather than a specified opponent. 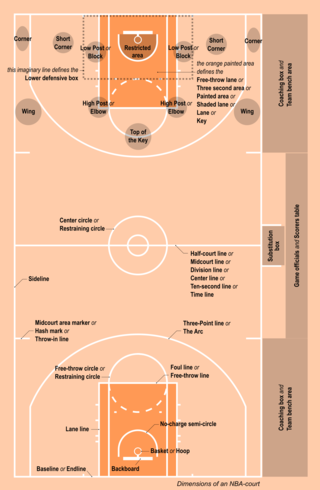