Fox Sports was a Turkish television channel owned by Fox Networks Group. It was launched in 10 April 2007 and broadcast live events such as NCAA, NFL, NHL, MLB, NASCAR and golf. The channel closed on March 1, 2020.

Fox Soccer is a former American television specialty channel specializing in soccer, owned by Fox Corporation, which operated from 1997 to 2013. It formerly broadcast rugby and Australian rules football, but in its final years it was devoted strictly to soccer.

NBC Sports is an American programming division of the broadcast network NBC, owned and operated by NBC Sports Group division of NBCUniversal and subsidiary of Comcast, that is responsible for sports broadcasts on the network, and its dedicated national sports networking cables. Formerly operating as "a service of NBC News", it broadcasts a diverse array of sports events, including the French Open, the IndyCar Series, NASCAR, the National Football League (NFL), the National Hockey League (NHL), Notre Dame Fighting Irish college football, the Olympic Games, professional golf, Premier League soccer, the Tour de France and Thoroughbred racing, among others. Other programming from outside producers – such as coverage of the Ironman Triathlon – is also presented on the network through NBC Sports. With Comcast's acquisition of NBCUniversal in 2011, its own cable sports networks were aligned with NBC Sports into a part of the division known as the NBC Sports Group.

Fox Sports, also referred to as Fox Sports Media Group, is the sports programming division of the Fox Corporation that is responsible for sports broadcasts carried by the Fox broadcast network, Fox Sports 1 (FS1), Fox Sports 2 (FS2), and the Fox Sports Radio network. 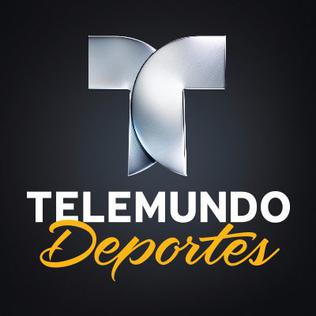 Telemundo Deportes is the programming division of the NBC Sports Group, owned by NBCUniversal, that is responsible for the production of sports events and magazine programs that air on NBCUniversal's Spanish language television networks Telemundo and Universo. Originating as the former's sports division Deportes Telemundo from 1999 to 2015, it broadcasts an array of sports events, including the association football matches from various international football leagues and the Olympic Games, among others.

Fox Deportes is an American pay television network dedicated to broadcasting sports-related programming in Spanish, aimed at the Hispanic population in the United States. Launched in 1996, Fox Deportes, a division of Fox Sports, is the first and longest-running Spanish-language sports network in the country.

Fox Sports is a Latin American pay television network that is owned by The Walt Disney Company Latin America, a unit of the Walt Disney Direct-to-Consumer and International. The network focuses on sports-related programming including live and pre-recorded event broadcasts, sports talk shows and original programming, available throughout Latin America. The network is based in Argentina, Colombia, Chile, Mexico, Paraguay, Peru and Uruguay.

Fox Sports 2 (FS2) is an American sports-oriented pay television channel that is owned by the Fox Sports Media Group, a unit of Fox Corporation. The channel is based at the Fox Sports division's headquarters in the Westwood section of Los Angeles, California.

Fox Sports is an Australian group of sports channels, which is owned by Fox Sports Pty Limited. Its main competitors are ESPN and beIN Sports, both available as part of a Foxtel or Kayo Sports subscription.

Fox Sports 1 (FS1) is an American pay television channel that is owned by the Fox Sports Media Group, a unit of Fox Corporation. FS1 replaced the motorsports network Speed on August 17, 2013, at the same time that its companion channel Fox Sports 2 replaced Fuel TV. Both FS1 and FS2 absorbed most of the sports programming from its predecessors, as well as content from Fox Soccer, which was replaced by the entertainment-based channel FXX on September 2, 2013.

Turner Sports (TS) is the subsidiary of AT&T's WarnerMedia responsible for sports broadcasts on channels including TBS, TNT, AT&T SportsNet, TruTV, and for operating the digital media outlets NCAA.com, NBA.com, PGATour.com and PGA.com, as well as Bleacher Report, and its streaming service, B/R Live. Turner Sports also operates NBA TV on behalf of the NBA, and owns a minority share in the MLB Network.

Krista Voda is an American sportscaster who covers auto racing. Voda was a pit reporter for Fox NASCAR and was the host of The Setup, the pre-race show for coverage of the Camping World Truck Series, as well as Trackside on Fox Sports 1. She also was a fill-in sideline reporter for the Fox NFL.

These are the sports broadcasting contracts in the Philippines. There are four primary local producers of sport programs in the country: Solar Sports, Tap Sports, ABS-CBN, GMA Network, and TV5/Cignal TV.

NBCSN is an American pay television channel that is owned by the NBC Sports Group division of NBCUniversal. It originally launched on July 1, 1995, as the Outdoor Life Network (OLN), which was dedicated to programming primarily involving fishing, hunting, outdoor adventure programs, and outdoor sports. By the turn of the 21st century, OLN became better known for its extensive coverage of the Tour de France but eventually began covering more "mainstream" sporting events, resulting in its relaunch as Versus in September 2006.

Fox Sports Racing is a motorsports-oriented cable network owned by the Fox Sports Media Group division of Fox Corporation. The network launched on August 17, 2013 as a replacement of the former cable network Speed for North American markets outside the United States, including Canada and the Caribbean.

FreeSports is a British free-to-air sports channel operated and owned by Premier Media S.à r.l. The channel is operated in the United Kingdom and launched on 31 August 2017. It is also available in the Republic of Ireland as a pay channel.