The gilt-head (sea) bream (Sparus aurata), called Orada in antiquity and still today in Italy (while in Spain is "Dorada"), is a fish of the bream family Sparidae found in the Mediterranean Sea and the eastern coastal regions of the North Atlantic Ocean. It commonly reaches about 35 centimetres (1.15 ft) in length, but may reach 70 cm (2.3 ft) and weigh up to about 7.36 kilograms (16.2 lb). [2]

The gilt-head bream is generally considered the best-tasting of the breams. It is the single species of the genus Sparus – the Latin name for this fish [3] – which has given the whole family of Sparidae its name. Its specific name, aurata, derives from the gold bar marking between its eyes.

The genome of the species was released in 2018, where the authors detected fast evolution of ovary-biased genes likely resulting from the peculiar reproduction mode of the species. [4]

It mainly feeds on shellfish, but also some plant material. [2]

Gilthead seabream is an esteemed food fish, but catches of wild fish have been relatively modest, between 6,100 and 9,600 tonnes in 2000–2009, primarily from the Mediterranean. [5] In addition, gilthead seabream have traditionally been cultured extensively in coastal lagoons and saltwater ponds. However, intensive rearing systems were developed during the 1980s, and gilthead seabream has become an important aquaculture species, primarily in the Mediterranean area and Portugal. Reported production was negligible until the late 1980s, but reached 140,000 tonnes in 2010, thus dwarfing the capture fisheries production. [6] Greece is the biggest seabream producer in Europe, followed by Turkey. [7]

The fish is widely used in Mediterranean cooking, under a variety of names. In Tunisia, it is known locally as "Dorate". 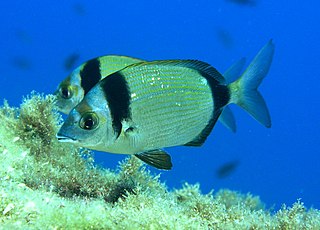 The European bass is a primarily ocean-going fish native to the waters off Europe's western and southern and Africa's northern coasts, though it can also be found in shallow coastal waters and river mouths during the summer months. It is one of only six species in its family, Moronidae, collectively called the temperate basses. 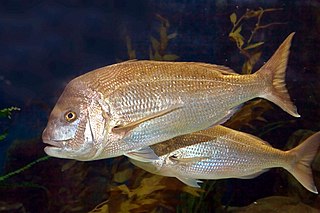 The Australasian snapper or silver seabream is a species of porgie found in coastal waters of Australia, Philippines, Indonesia, mainland China, Taiwan, Japan and New Zealand. Its distribution areas in the Northern and Southern Hemispheres are disjunct. Although it is almost universally known in Australia and New Zealand as snapper, it does not belong to the snapper family, Lutjanidae. It is highly prized as an eating fish.

The red porgy, or common seabream, is a species of marine ray-finned fish in the family Sparidae. It is found in shallow waters on either side of the Atlantic Ocean, being present on the western coast of Europe and the Mediterranean Sea as well as the eastern coasts of North and South America and the Caribbean Sea. It feeds on or near the seabed and most individuals start life as females and later change sex to males. 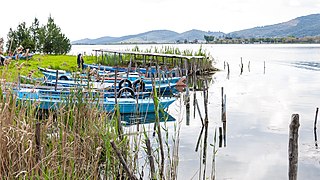 The Missolonghi-Aitoliko lagoons complex is located in the north part of the Gulf of Patras in the central west coast of Greece. It is one of the most important Mediterranean lagoons. It is a shallow area of 150 km2, extended between the Acheloos and Evinos rivers. It is protected by the Ramsar Convention and it is also included in the Natura 2000 network. 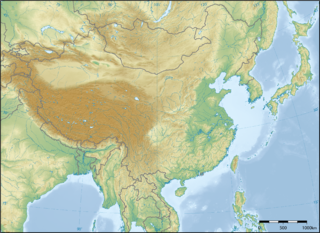 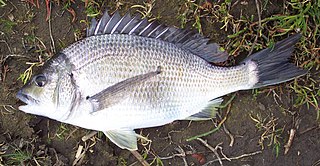 Porgy is the common name in the US for any fish which belongs to the family Sparidae. They are also called bream. Porgies live in shallow temperate marine waters and are bottom-dwelling carnivores. Most species possess grinding, molar-like teeth. They are often good eating fish, particularly the gilt-head bream and the dentex.

Fishing in Israel is a branch of the Israeli economy with historical significance. The three main natural fishing zones are the Mediterranean Sea, the Gulf of Aqaba, and the Kinneret. A fourth area that was once historically significant, Lake Hula, no longer exists, as it was drained in the 1950s. In addition, aquaculture the growth of fish in ponds or in cages, is rising in prominence.

South Korea occupies the southern portion of the Korean peninsula. The total land mass of the country is 98,480 km2 but usable land is only 20% of the total and thus the population is concentrated around the coast. The Korean Peninsula is surrounded by the East, West and South Seas, a coast-line that extends for about 2,413 km. Endowed with an abundance of fisheries resources, Koreans have developed a distinct seafood culture with annual per capita sea food consumption of 48.1 kg in 2005.

The blackspot seabream, also known as the red seabream, is a marine ray-finned fish species in family Sparidae. It is widespread in the Eastern Atlantic from Norway to Mauritania, including Macaronesia and the western Mediterranean.

Diplodus cervinus, the zebra sea bream, is a species of seabream belonging to the family Sparidae.

Tuna penning is a practice used in marine aquaculture, in which smaller tuna are caught off shore and moved back to large, in-water enclosures. The pens are typically located in the relatively shallow waters of sheltered areas, such as bays or coves. Tuna penning is primarily used for Atlantic Bluefin Tuna (ABT), a highly profitable stock for the global fish market. The tuna caught for penning are typically caught between May and July by purse-seine vessels, and then transported back to pens, where they are fattened until October–January before being frozen and shipped out. While in the pens, the tuna are fed primarily fresh fish, such as sardines, squid, and mackerel. In the past decade, tuna penning has become a large sector within the fish aquaculture industry, and takes place primarily in the Mediterranean. In 2010, ABT constituted 8% of global fish exports, the majority of which was shipped to Japan. Tuna penning is regulated by the International Commission for the Conservation of Atlantic Tunas (ICCAT), and each farm is required to register both the number of tuna it has and the total capacity of the farm.

Beymelek Lagoon is a lagoon on the Mediterranean coast, which is used as a fishery, in Antalya Province, southwestern Turkey. It is named after the village of Beymelek, which is located to the west of the water body. It is situated in Demre ilçe (district) of Antalya Province at 36°16′N30°03′E. 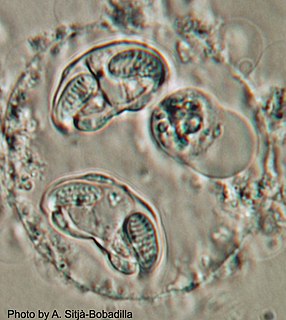 Enteromyxum leei is a species of myxozoan, histozoic parasite that infects the intestinal tract and sometimes associated organs, like gall bladder and liver, of several teleostean fish species. Myxozoans are microscopic metazoans, with an obligate parasitic life-style. The parasite stages of this species live in the paracelullar space between fish enterocytes. It is the causative agent of enteromyxosis, or emaciative disease, also known as "razor blade syndrome" in sparid fish. E. leei has a wide host and geographical range within marine fish, and even freshwater fish have been infected experimentally. E. leei initially emerged in the Mediterranean in the late 1980s and it is believed to have been unintentionally introduced into the Red Sea. Its pathogenicity and economic impact depend on the host species. In the gilt-head seabream, it is manifested as a chronic disease that provokes anorexia, delayed growth with weight loss, cachexia, reduced marketability and increased mortality. In other species, it has no clinical signs. In sharpsnout seabream, infection results in very high mortality rates, which have pushed fish farmers to abandon the culture of this fish species.

C. oestroides is a crustacean isopod, obligate ectoparasite of marine fish that dwells in the buccal cavity. It is the causative agent of various pathologies including tissue damage at the parasitisation site (tongue), growth defects, decrease in mean host weight and size and increases mortalities in farmed and wild fish populations. It has been recorded in six different fish families: Sparidae, Carangidae, Clupeidae, Maenidae, Scorpenidae, and Mugilidae.