The Pacific bluefin tuna (Thunnus orientalis) is a predatory species of tuna found widely in the northern Pacific Ocean, but it is migratory and also recorded as a visitor to the south Pacific. [1] [3]

Like the closely related Atlantic bluefin and southern bluefin, the Pacific bluefin is a commercially valuable species and several thousand tonnes are caught each year, making it overfished. [1] [6] [7] It is considered threatened by the IUCN and PEW. [1] [8] Monterey Bay Aquarium's Seafood Watch program have placed all bluefin tunas on the "Avoid" list, [ citation needed ] an they are also placed on the "Red List" by Greenpeace and the Blue Ocean Institute. [9] [10]

The Pacific bluefin tuna is primarily found in the North Pacific, ranging from the East Asian coast to the western coast of North America. [1] [5] It is mainly a pelagic species found in temperate oceans, but it also ranges into the tropics and more coastal regions. [1] It typically occurs from the surface to 200 m (660 ft), [5] but has been recorded as deep as 550 m (1,800 ft). [1]

It spawns in the northwestern Philippine Sea (e.g., off Honshu, Okinawa and Taiwan) and in the Sea of Japan. [1] [11] Some of these migrate to the East Pacific and return to the spawning grounds after a few years. [1] It has been recorded more locally as a visitor to the Southern Hemisphere, including off Australia, New Zealand, Gulf of Papua and French Polynesia. [1] [5]

The species is considered to consist of only one stock. [3]

Almost all fish are cold-blooded (ectothermic). [12] However, tuna and mackerel sharks are warm-blooded: they can regulate their body temperature. Warm-blooded fish possess organs near their muscles called retia mirabilia that consist of a series of minute parallel veins and arteries that supply and drain the muscles. As the warmer blood in the veins returns to the gills for fresh oxygen it comes into close contact with cold, newly oxygenated blood in the arteries. The system acts as a counter-current heat exchanger and the heat from the blood in the veins is given up to the colder arterial blood rather than being lost at the gills. The net effect is less heat loss through the gills. Fish from warmer water elevate their temperature a few degrees whereas those from cold water may raise it as much as 20 °C (36 °F) warmer than the surrounding sea.

The tuna's ability to maintain body temperature has several definite advantages over other sea life. It need not limit its range according to water temperature, nor is it dominated by climatic changes. The additional heat supplied to the muscles is also advantageous because of the resulting extra power and speed.

Spawning occurs from April to August, but the exact timing depends on the region: Early in the northwest Philippine Sea (the southern part of its breeding range) and late in the Sea of Japan (the northern part of its breeding range). [1] Large females can carry more eggs than small ones, and between 5 million and 25 million eggs have been reported. [1]

Japan is both the biggest consumer and the leader in tuna farming research. [15] [16] Kinki University of Japan first successfully farmed already-hatched bluefin tuna in 1979. In 2002, they succeeded in breeding them, and in 2007, the process was repeated for a third generation. [17] [18] [19] This farm-raised tuna is now known as Kindai tuna. Kindai is a contraction of Kinki University (Kinki daigaku). [20]

Unlike the other bluefins (Atlantic and southern), [21] [22] the Pacific bluefin tuna was not considered threatened initially, resulting in a Least Concern rating in 2011. In 2014, it was found to be threatened and the status was upgraded to Vulnerable. [1] [23] Overfishing is occurring in the Pacific bluefin, but overall the stock was not yet believed to be in an overfished condition in 2011. [24]

According to stock assessments completed in 2011, 2014 and 2016 by the International Scientific Committee for Tuna and Tuna-Like Species in the North Pacific Ocean (ISC), the present-day population is at just 2.6 percent of its historic levels. [25] The overall fishing mortality rate for this species remains up to three times higher than is sustainable. [26]

Its wide range and migratory behavior lead to some problems, since fisheries in the species are managed by several different Regional Fisheries Management Organisations that sometimes give conflicting advice. The IUCN have recommended that the responsibility is moved to a single organisation. [1] Other recommendations include a substantial reduction of fishing of this species, especially juveniles. [1] As much as 90% of the caught Pacific bluefins are juveniles. [27]

Monterey Bay Aquarium's Seafood Watch program have placed all bluefin tunas on the "Avoid" list, [28] and they are also placed on the "Red List" by both Greenpeace and the Blue Ocean Institute. [9] [10]

Pacific bluefin flesh may contain levels of mercury or PCBs that are harmful to humans that consume it. [10] A similar problem exists in other tuna species.

About 80% of the Pacific and Atlantic bluefin tunas are consumed in Japan, and tunas that are particularly suited for sashimi and sushi can reach very high prices. In Japan, some foods made available for the first time of the year are considered good luck, especially bluefin tuna. Winning these new year auctions is often used as a way to get publicity, which raises the prices considerably higher than their usual market value: on 5 January 2013, a 489-pound (222 kg) Pacific bluefin tuna caught off northeastern Japan was sold in the first auction of the year at the Tsukiji fish market in Tokyo for a record 155.4 million yen (US$1.76 million) – leading to record unit prices of US$3,603 per pound, or ¥703,167 per kilogram. [29] A 618-pound (280 kg) pacific bluefin tuna sold for 333.6 million yen (US$3.1 million) at a Tokyo fish market on 5 January 2019. The price equates to roughly $5,000 a pound, more than double the previous record. The fish was caught off Oma in northern Japan. [30] 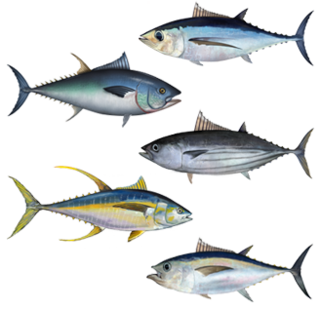 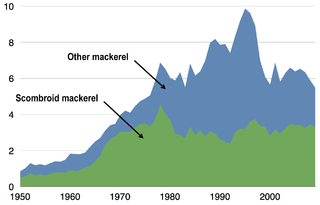 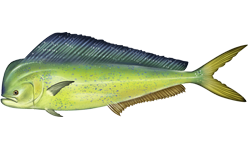 The mahi-mahi or common dolphinfish is a surface-dwelling ray-finned fish found in off-shore temperate, tropical, and subtropical waters worldwide. Also widely called dorado and dolphin, it is one of two members of the family Coryphaenidae, the other being the pompano dolphinfish. These fish are most commonly found in the waters around the Gulf of Mexico, Costa Rica, Hawaii and Indian Ocean. 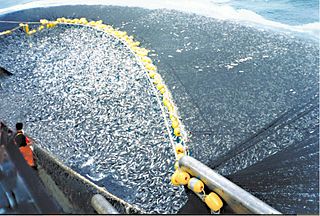 The International Commission for the Conservation of Atlantic Tunas (ICCAT) is an intergovernmental organization responsible for the management and conservation of tuna and tuna-like species in the Atlantic Ocean and adjacent seas. The organization was established in 1966, at a conference in Rio de Janeiro, Brazil, and operates in English, French and Spanish. The organisation has been strongly criticised by scientists for its repeated failure to conserve the sustainability of the tuna fishery by consistently supporting over-fishing – an internal review branded ICCAT's policies on the eastern Atlantic bluefin tuna fishery a "travesty of fisheries management", and an "international disgrace". Conservationists often refer to ICCAT as "The International Conspiracy to Catch All Tuna". 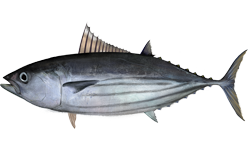 The skipjack tuna is a medium-sized perciform fish in the tuna family, Scombridae. It is otherwise known as the balaya, tongkol, arctic bonito, mushmouth, oceanic bonito, striped tuna, or victor fish. It grows up to 1 m (3 ft) in length. It is a cosmopolitan pelagic fish found in tropical and warm-temperate waters. It is a very important species for fisheries.

The Bigeye tuna is a species of true tuna of the genus Thunnus, belonging to the wider mackerel family Scombridae.

The Atlantic bonito is a large mackerel-like fish of the family Scombridae. It is common in shallow waters of the Atlantic Ocean, the Mediterranean Sea, and the Black Sea, where it is an important commercial and game fish. 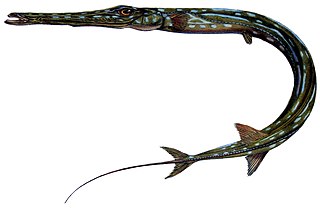 Fistularia tabacaria, the cornetfish, bluespotted cornetfish, tobacco trumpetfish or unarmed trumpetfish, is a species of cornetfish found along the Atlantic coasts of the Americas and in the central Atlantic off west Africa and the Macaronesian Islands. This species is of minor importance in commercial fisheries. 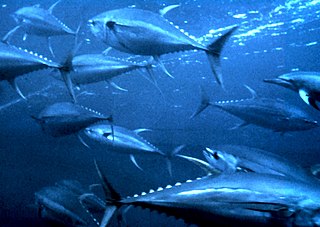 Thunnus is a genus of ocean-dwelling, ray-finned bony fish from the mackerel family, Scombridae. More specifically, Thunnus is one of five genera which make up the tribe Thunnini – a tribe that is collectively known as the tunas. Also called the true tunas or real tunas, Thunnus consists of eight species of tuna, divided into two subgenera. The word Thunnus is the Middle Latin form of the Ancient Greek: θύννος, romanized: (thýnnos), lit. 'tunny-fish' – which is in turn derived from θύνω (thynō), "to rush; to dart". The first written use of the word was by Homer.

Barbara Block is an American marine biologist and Charles & Elizabeth Prothro Professor of Biology in Marine Sciences at the Stanford University Hopkins Marine Station and a co-director of Stanford University's Tuna Research and Conservation Center, with the Monterey Bay Aquarium. She has published numerous bodies of work throughout her career in marine biology and chemistry, mainly focusing on the biology and chemistry of metabolism in different tuna and shark species. Additionally, she has helped develop two new types of electronic tags for large pelagic predators in order to track the migrations of large oceanic predator species. 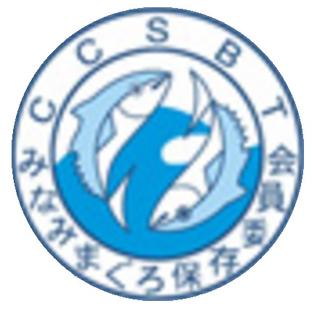 The Commission for the Conservation of Southern Bluefin Tuna (CCSBT) is a Regional fisheries management organisation and International Organization with the purpose of managing the stocks of the critically endangered Southern bluefin tuna.