It opened on September 21, 1896 and is the oldest surviving theater in Central Ohio and one of the oldest in the state of Ohio. The Southern Theatre is currently owned and operated as a home for live concerts, plays and opera by CAPA (the Columbus Association for the Performing Arts). CAPA also manages several other venues in Columbus including the Ohio, the Palace, and the Lincoln Theatres. [2]

Between 1889 and 1893 a series of fires destroyed five downtown Columbus theaters. As a result, a group of businessmen decided to develop a new hotel and theater with modern construction and safety features on the southern edge of downtown. The building was called "The Great Southern Fireproof Hotel and Opera House", and was designed by the local architectural firm of Dauben, Krumm, and Riebel. Construction began in 1894. Both the theater and the hotel were constructed of "fireproof" tile, brick, iron, steel, and concrete. [3]

The theater's auditorium design was progressive for its day and was reminiscent of Louis H. Sullivan's 1891 Schiller Theatre in Chicago. From the proscenium opening, a series of concentric arches dotted with incandescent electric lights radiate into the house, resulting in superior lighting and excellent acoustics. Built to be self-sufficient, the theater, one of the first commercial buildings in Columbus to use electricity, generated its own power. Additionally, the building had three wells in the basement, from which it produced its own water supply. [3] The theatre currently seats 933 [4] and is an intimate "jewel box" type theater with two balconies.

In 1982, the Great Southern was added to the National Register of Historic Places. [1]

The Great Southern Theatre originally hosted theatrical touring productions. Sarah Bernhardt played in the theater in its first two decades. In the 1910s and 1920s the theater, now called the Southern, featured first run silent films and live vaudeville. From the 1930s on, the Southern was a popular home for second-run double features. In the 1970s the theater briefly returned to first run fare as the Towne Cinema, showing black exploitation movies. Throughout the 1970s the Southern also hosted a weekly live Country Music Jamboree, sponsored by local radio station WMNI. [3]

The theater closed in 1979 and in 1986 was acquired by CAPA. After sitting empty for nearly two decades, the Southern was completely restored by CAPA in 1997-98 during an extensive 14-month rebuilding process. The newly restored Southern Theatre reopened on September 26, 1998. The Southern Theatre is now featured on many of Columbus's architectural tours. [5] [6] 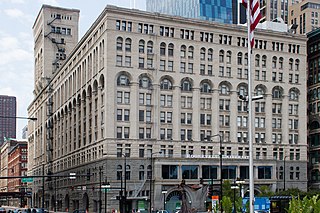 The Auditorium Building in Chicago is one of the best-known designs of Louis Sullivan and Dankmar Adler. Completed in 1889, the building is located at the northwest corner of South Michigan Avenue and Ida B. Wells Drive. The building was designed to be a multi-use complex, including offices, a theater, and a hotel. As a young apprentice, Frank Lloyd Wright worked on some of the interior design. 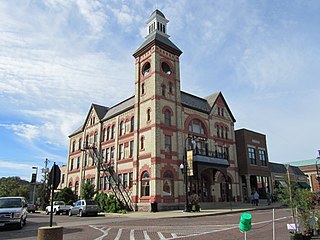 The Woodstock Opera House is a historical venue for performing arts and receptions located in Woodstock, Illinois. It was built in 1889 and designed as a multi-use facility with space for city administration offices as well as police and fire departments. The building was planned by architect Smith Hoag and built by contractor Simon Brink for a cost of $25,000. Today, the City of Woodstock still owns the building, but the building is used exclusively as a performance space. 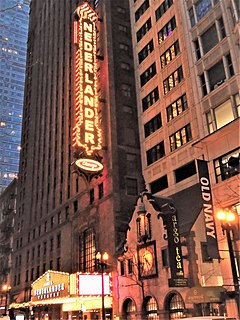 The James M. Nederlander Theatre is a theater located at 24 West Randolph Street in the Loop area of downtown Chicago, Illinois. Previously known as the Oriental Theatre, it opened in 1926 as a deluxe movie palace and vaudeville venue. Today the Nederlander presents live Broadway theater and is operated by Broadway In Chicago, currently seating 2,253.

The Egyptian Theatre is a theatre and concert venue in the western United States, located in Boise, Idaho. It has also been known as the Ada Theater. Inaugurated 95 years ago in 1927, it is the oldest theatre in the city. When it opened, the local press wrote that it "embodies the characteristic features of the land of the Nile, from the truncated pyramids which form the great pylons, to the lotus bud pillars with their ornate frescoes." The great lotus pillars flanking the screen are based on those of Karnak. The theatre has been renovated by Conrad Schmitt Studios.

The Springer Opera House is a historic theater at 103 Tenth Street in Downtown Columbus, Georgia. First opened February 21, 1871, the theater was named the State Theatre of Georgia by Governor Jimmy Carter for its 100th anniversary season, a designation made permanent by the 1992 state legislature. The Springer has hosted legendary performers such as Edwin Booth, Oscar Wilde, Ethel Barrymore, Agnes de Mille, and bandleader John Philip Sousa. The building was added to the National Register of Historic Places in 1970 and named a National Historic Landmark in 1978 for its architecture and state of preservation. 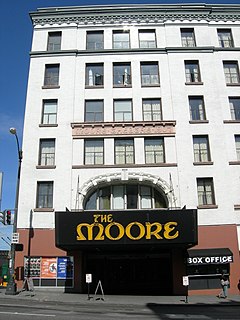 Moore Theatre is an 1,800-seat performing arts venue in Seattle, Washington, United States, located two blocks away from Pike Place Market at the corner of 2nd Avenue and Virginia Street. It opened in 1907 and is Seattle's oldest active theater, hosting a variety of theatrical productions, concerts and lectures. The Moore is currently operated by the Seattle Theatre Group, which also runs the 2,803-seat Paramount Theatre and the Neptune Theatre.

The Victoria Theatre is a historic 1,154-seat performing arts venue located in downtown Dayton, Ohio. The Victoria presents traveling broadway shows, concerts and other theatrical productions such as The Phantom of the Opera.

The Music Hall Center for Performing Arts is a 1,731-seat theatre located in the city's theatre district at 350 Madison Street in Downtown Detroit, Michigan. It was built in 1928 as the Wilson Theatre, designated a Michigan State Historic Site in 1976, and was listed on the National Register of Historic Places in 1977. 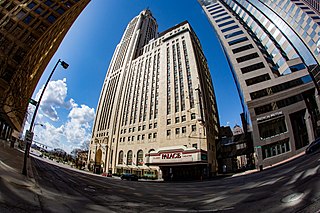 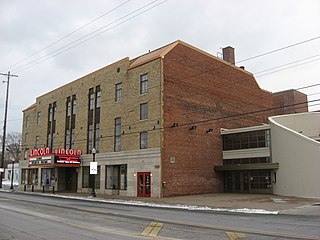 The Columbus Association for the Performing Arts (CAPA) is non-profit arts and theater management organization based in Columbus, Ohio. 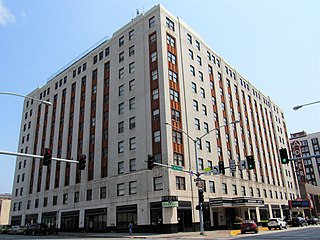 The Mississippi Lofts and Adler Theatre is an apartment building and theater complex located in downtown Davenport, Iowa, United States. It is individually listed on the National Register of Historic Places by its original name, the Hotel Mississippi and RKO Orpheum Theater. The Hotel Mississippi was listed on the Davenport Register of Historic Properties in 2005. In 2020 the complex was included as a contributing property in the Davenport Downtown Commercial Historic District.

Second Presbyterian Church is a historic church building in Downtown Columbus, Ohio. It was built in 1857 in a Romanesque style and was added to the National Register of Historic Places in 1983. It closed on November, 2011. The site was previously the location of the first public school in Columbus, built in 1826.

The Ventura Theatre is a historic live concert venue in downtown Ventura, California. This was "the only luxury theatre built in Ventura County in the 1920s in the "style of the great movie palaces." The lavish, elegant interior of gilt and opulence was originally designed by Robert E. Power Studios of San Francisco and has been restored. The theatre with a capacity of 1,150 and a flanking office building were designed by architect L. A. Smith in the Spanish Colonial Revival architecture that was favored by architects of motion picture theaters during the 1920s. 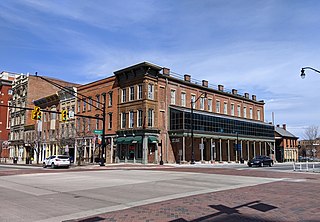