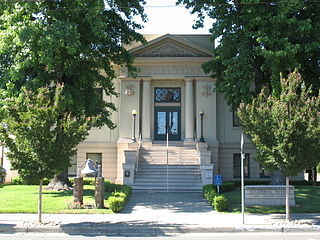 Healdsburg is a city located in Sonoma County, in California's Wine Country. As of the 2010 United States Census, the city had a population of 11,254. Healdsburg is a small tourist-oriented town in northern Sonoma County. Due to its three most important wine-producing regions, Healdsburg has been continuously awarded one of the top 10 small towns in America and is home to three of the top wineries in the United States. 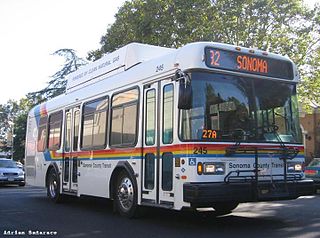 The Metropolitan Transit Authority of Harris County is a major public transportation agency based in Houston, Texas, United States. It operates bus, light rail, bus rapid transit, HOV and HOT lanes, and paratransit service in the city as well as most of Harris County. METRO also operates bus service to two cities in Fort Bend County. The METRO headquarters are in the Lee P. Brown Administration Building in Downtown Houston.

Allison Transmission is an American manufacturer of commercial duty automatic transmissions and hybrid propulsion systems. Allison products are specified by over 250 vehicle manufacturers and are used in many market sectors including bus, refuse, fire, construction, distribution, military and specialty applications. With headquarters in Indianapolis, Indiana, Allison Transmission has regional offices all over the world and manufacturing facilities in Indianapolis, Chennai, India, and Szentgotthárd, Hungary.

VIA Metropolitan Transit is the mass transit agency serving San Antonio, Texas, United States, and its surrounding municipalities. It began operation in 1978 as a successor to the San Antonio Transit System.

The Wayne Route 23 Transit Center is a mass transportation hub located in Wayne, New Jersey, USA. Operated by NJ Transit, the complex consists of two major components. One is a bus terminal that provides service to Port Authority Bus Terminal, Newark Penn Station, and intermediate points in the surrounding area. The other is a train platform that is connected to the Montclair-Boonton Line and offers service to Hoboken Terminal, connecting service to New York Penn Station, and local service to points between Montclair State University and Hackettstown. It is located off of the southbound lanes of New Jersey Route 23 on West Belt Road, near the interchange where Route 23, I-80, and US 46 meet, across from the Willowbrook Mall. The station opened in January 2008 and has 1,000 parking spaces.

The San Rafael Transportation Center in San Rafael, California, also called the C. Paul Bettini Transportation Center, is the main passenger transit terminal for Marin County. From here, passengers can make transfers throughout Marin County, to San Francisco, Contra Costa, and Sonoma Counties. It is also an important station for buses serving San Francisco International Airport, Oakland International Airport, and the rest of the country. The Transit Center is planned to be re-configured or moved in the coming years as Sonoma–Marin Area Rail Transit trains pass through the transit center.

CyRide is a partnership between Iowa State University, the ISU Student Government, and Ames, Iowa. CyRide provides public transportation to the community throughout the city of Ames. The word CyRide is a portmanteau of two words: Cy and the word ride. In January 2012, CyRide was recognized "as the nation’s small urban transit system with the highest number of rides per capita" at 106 rides per capita.

Petaluma Downtown is a Sonoma–Marin Area Rail Transit station in Petaluma. It opened to preview service on June 29, 2017; full commuter service commenced on August 25, 2017. A new platform and facilities were constructed adjacent to the historic Northwestern Pacific Railroad station building, which opened in 1914. It is the system's first station to open in the city, with the Petaluma–North station set to open in the second phase of construction.

Healdsburg is a former and future rail station in Healdsburg, California. It will be served by Sonoma–Marin Area Rail Transit after a further phase of construction.

Carbon County Community Transit (CCCT) is a public transit agency providing bus service in Carbon County in the US state of Pennsylvania. The agency operates The Lynx fixed-route bus service, which connects points within the county along with the Lehigh Valley Mall, and Shared Ride paratransit service. CCCT is administered by the Lehigh and Northampton Transportation Authority (LANTA) under contract with Carbon County and is operated by Easton Coach Company.