San Francisco 4th and King Street, 4th and King [2] (previously 4th & Townsend), or Caltrain Depot is the north end of the Caltrain commuter rail line to the San Francisco Peninsula and Santa Clara Valley, and is a major area transit hub. It is next to a Muni Metro light rail station, which provides connections to downtown San Francisco and Bay Area Rapid Transit.

The station is in the Mission Bay/China Basin area, bordered on the north by Townsend Street, east by 4th Street, and south by King Street. All 13 tracks approaching from the west presently terminate here, just short of 4th Street. The facility opened on June 21, 1975, replacing a station built in 1914 at 3rd and Townsend, one block away to the east.

4th & King is one block from Oracle Park, the home of the San Francisco Giants. Caltrain runs extra trains on game days to shuttle fans to and from the ballpark.

The Muni light-rail extension to the station was opened in 1998. [4]

The Downtown Rail Extension project to the rebuilt Transbay Terminal includes the construction of an underground 4th and King station. The underground portion will be adjacent to the current station on the Townsend Street side, [5] but Caltrain will continue using the surface platforms. [6] Until that time, California High-Speed Rail trains are planned to utilize the existing station with modifications for that service. [6] [7] [8]

Following the opening of the Downtown Rail Extension project, California High-Speed Rail service will be extended to the new Transbay Terminal, though most trains are intended to stop at the underground 4th and Townsend as an additional, secondary stop for San Francisco. [9]

N Judah service replaced the J Church on June 30, 2007, two months after the J Church replaced the N Judah on April 7, 2007, on the Caltrain connection to downtown following the opening of the T line. The nearest BART access is the Powell Street station, a 1-mile (1.6 km) walk up 4th street then left on Market St.

Service to Chinatown via Muni's Central Subway will connect to this station in 2022 after a realignment of the T Third Street line's route. [10]

The San Francisco Municipal Railway (SF Muni or Muni) is the public transit system for the City and County of San Francisco. Despite the name, the network has 54 bus lines and 17 trolleybus lines, in addition to seven light rail lines that operate above ground and in the city's lone subway tube, three historic cable car lines, and two historic streetcar lines. 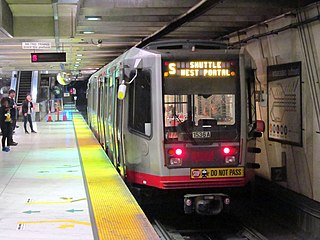 The S Shuttle is a light rail service on the Muni Metro system in San Francisco, California. The service began in 2001 as the S Castro Shuttle, an effort to reduce crowding at Castro station. It was briefly discontinued in 2007 when the T Third Street line was opened. Service was extended to St. Francis Circle station in 2013, but cut back to West Portal station in 2016. In 2020, it was changed to full-time service as part of a reconfiguration of Muni Metro service. 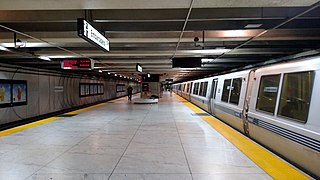 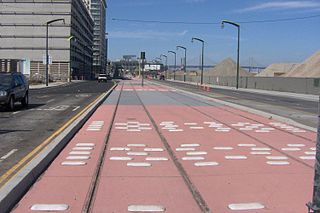 The Third Street Light Rail Project was the construction project that expanded the Muni Metro system in San Francisco, California, linking downtown San Francisco to the historically underserved southeastern neighborhoods of Bayview-Hunters Point and Visitacion Valley along the eastern side of the city. Construction was finished in late 2006, non-revenue weekend service began on January 13, 2007, and full service began on April 7, 2007. The new service, as the T Third Street Metro line, replaced the 15 Third bus line, which ran south from the Caltrain Depot at 4th and King streets, along Third Street and Bayshore Boulevard to the southeastern neighborhoods. 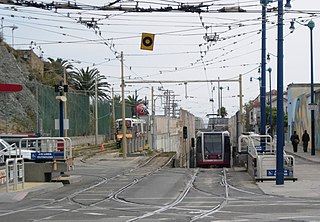 The Market Street subway is a double-decker subway tunnel that carries Muni Metro and BART train traffic in San Francisco, California. It runs under the length of Market Street between Embarcadero Station and Castro Street Station. The upper level is used by Muni Metro lines and the lower level is used by BART lines. BART does not run through the whole subway; it turns south and runs under Mission Street southwest of Civic Center Station. The northeastern end of the BART level is connected to the Transbay Tube. On the Muni Metro level, the southwestern end of the Market Street subway connects to the much-older Twin Peaks Tunnel, and the northeastern end connects to surface tracks along the Embarcadero. 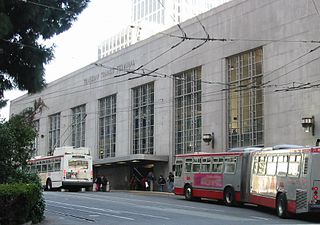 The San Francisco Transbay Terminal was a transportation complex in San Francisco, California, United States, roughly in the center of the rectangle bounded north–south by Mission Street and Howard Street, and east–west by Beale Street and 2nd Street in the South of Market area of the city. It opened on January 14, 1939 as a train station and was converted into a bus depot in 1959. The terminal mainly served San Francisco's downtown and Financial District, as transportation from surrounding communities of the Bay Area terminated there such as: Golden Gate Transit buses from Marin County, AC Transit buses from the East Bay, and SamTrans buses from San Mateo County. Long-distance buses from beyond the Bay Area such as Greyhound and Amtrak also served the terminal. Several bus lines of the San Francisco Municipal Railway connected with the terminal. 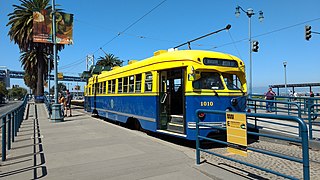 The Embarcadero and Folsom station is a Muni Metro light rail station located in the median of The Embarcadero between Folsom Street and Harrison Street in the Rincon Hill area of San Francisco, California. Muni Metro trains use a high-level island platform, while historic streetcars use a pair of side platforms at the southeast end of the station next to the Harrison Street grade crossing. 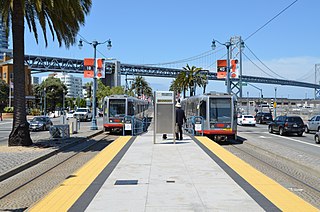 The Embarcadero and Brannan station is a Muni Metro light rail station located in the median of The Embarcadero south of Brannan Street in the South Beach area of San Francisco, California. Muni Metro trains use a high-level island platform, while historic streetcars use a pair of side platforms at the south end of the station. 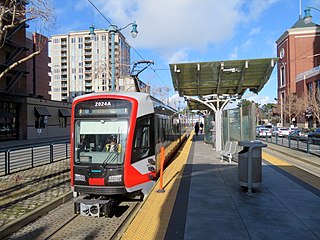 2nd and King station is a Muni Metro light rail station located in the median of King Street near Second Street in the China Basin neighborhood of San Francisco, California. It is adjacent to Oracle Park. Muni Metro trains use a high-level island platform, while historic streetcars use a pair of side platforms just to the south. 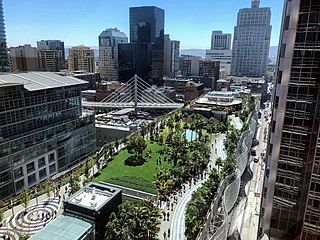 Salesforce Transit Center is a transit station in downtown San Francisco. It serves as the primary bus terminal — and potentially as a future rail terminal — for the San Francisco Bay Area. The centerpiece of the San Francisco Transbay development, the construction is governed by the Transbay Joint Powers Authority (TJPA). The 1,430-foot (440 m)-long building is located one block south of Market Street, a primary commercial and transportation artery in San Francisco.