He was consecrated a bishop and appointed as Bishop of Durham in 1973. [6] He was passed over by Margaret Thatcher for appointment as Bishop of London in 1981. [7]

Habgood was elevated to Archbishop of York on 18 November 1983. [8] The other name put forward for her consideration was that of former England cricketer, David Sheppard, by then Bishop of Liverpool. Sheppard's socialist views - he later sat in the Lords as a Labour Peer - did not commend him to Thatcher. [9] As an archbishop, Habgood was made a Privy Counsellor in 1983. [10]

As Archbishop of York, Habgood was seen as a leader in keeping more conservative Anglicans within the church during growing divisions over the issue of women's ordination to the priesthood. [11] He supported the ordination of women to the priesthood, arguing that God is neither male nor female. [12] He also supported accommodating those who did not, and so introduced provincial episcopal visitors to provide pastoral care and oversight to laity, clergy, and parishes who could not accept women priests. [12] Habgood retired as Archbishop of York in 1995.

When Robert Runcie announced his retirement as Archbishop of Canterbury in 1990, Habgood was regarded as one of the favourites to succeed him. The religious journalist Clifford Longley described him as "the outstanding churchman of his generation", although noting that Habgood had described himself as too old. [13] As preparations for the selection of the new Archbishop began, Habgood gave a television interview stating that he was interested in being considered as "if I believed that this is what the church really wanted and if I believed that this is what God really wanted I would be under a strong obligation to say yes." At the same time it was reported that Habgood was not popular among those close to the Prime Minister, Margaret Thatcher, who would make the actual recommendation to the Queen. [14] Habgood had also attracted criticism inside and outside the Church for his behaviour during the controversy arising from the 1987 publication of the anonymous Preface to that year's edition of Crockford's Clerical Directory.

At the beginning of May a report in the Sunday Correspondent stated that four candidates were under active consideration: Habgood, David Sheppard (Bishop of Liverpool), Colin James (Bishop of Winchester) and John Waine (Bishop of Chelmsford). [15] Habgood declined to take up the automatic place he could have had on the Crown Appointments Commission, which would select the two names to be given to the Prime Minister. [16] He was endorsed in a leader in The Times on 10 July 1990. [17] On 25 July it was announced that the next Archbishop of Canterbury would be George Carey, the Bishop of Bath and Wells. Habgood described him as "a good choice", adding that "there is a little human bit in anybody that likes the top job, but that is a very small part in my feelings. In my heart of hearts I didn't really want the job. If it had come five years ago I might have thought differently but you slow up and it is an enormously tiring job." [18]

From his appointment as Bishop of Durham in 1973 to his retirement as Archbishop of York in 1995, Habgood sat in the House of Lords as a Lord Spiritual. This was due to the senior rankings of the two bishoprics in the Church of England, which each granted an automatic seat in the Lords. He voted against Section 28 of the Local Government Act 1988 which banned local authorities from "promoting homosexuality" and state schools from teaching the "acceptability of homosexuality as a pretended family relationship": it was later repealed in 2000 in Scotland and in 2003 in the rest of the UK. [19]

Habgood was created a life peer as Baron Habgood, of Calverton in the County of Buckinghamshire on 8 September 1995, [20] allowing him to continue to sit in the House of Lords as a Lord Temporal. He sat as a crossbencher, rather than join a political party. [12] Later in his life he ceased attending the Lords and took leave of absence; on 3 October 2011 he became one of the first two peers to formally and permanently retire from membership under a newly instituted procedure [21] that was created before permanent retirement achieved full legal recognition under the House of Lords Reform Act 2014.

Habgood was a member and past president of The Science and Religion Forum. [22] He wrote in this area, e.g., his book Truths in Tension: New Perspectives on Religion and Science (1965). Another example of his work in this area is "Faith, Science and the Future: the Conference Sermon", which was given at the World Council of Churches' conference on Faith, Science and the Future held on the MIT campus (12–24 July 1979). [23] An early 21st-century example is his review of Ronald L. Numbers's book The Creationists, which Habgood titled "The creation of Creationism: Today's brand of Protestant extremism should worry theologians as well as scientists". [24]

A Cavendish Professor of Physics and Nobel Laureate, Nevill Mott, has cited this book. :

"I am impressed too by the point of view of the present Archbishop of York (John Habgood, Science and Religion, [London: Hodder and Stoughton, 1964]), that to understand the Bible we must try to enter into the belief patterns of the period" [25]

Richard John Carew Chartres, Baron Chartres, is a retired bishop of the Church of England. He was area Bishop of Stepney from 1992 to 1995 and Bishop of London from 1995 to 2017. He was sworn of the Privy Council in the same year he became Bishop of London. He was also Gresham Professor of Divinity from 1987 to 1992. In October 2017, Chartres was made a Life Peer, and he now sits in the House of Lords as a crossbencher; he had previously sat in the House as one of the Lords Spiritual

David Michael Hope, Baron Hope of Thornes, is a retired Anglican bishop. He was the Bishop of Wakefield between 1985 and 1991, and the Bishop of London between 1991 and 1995. From 1995 to 2005, he was the Archbishop of York in the Church of England. In March 2005, he was made a life peer and therefore a member of the House of Lords; he had already sat in the house as a Lord Spiritual when he was a bishop. He retired from the Lords in April 2015.

Robert Alexander Kennedy Runcie, Baron Runcie was a British Anglican bishop. He was the Archbishop of Canterbury from 1980 to 1991, having previously been Bishop of St Albans. He travelled the world widely to spread ecumenicism and worked to foster relations with both Protestant and Catholic churches across Europe. He was a leader of the Liberal Anglo-Catholicism movement. He came under attack for expressing compassion towards bereaved Argentinians after the Falklands War of 1982, and generated controversy by supporting women's ordination. Biographer Adrian Hastings argues that Runcie was not a distinguished writer or thinker, but was a good administrator who made shrewd appointments, demanded quality, and recognized good performances. 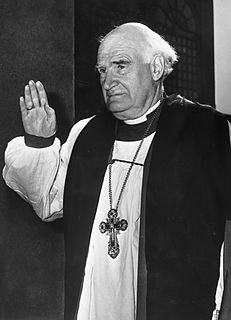 David Stuart Sheppard, Baron Sheppard of Liverpool was the high-profile Bishop of Liverpool in the Church of England who played cricket for Sussex and England in his youth. Sheppard remains the only ordained minister to have played Test cricket, though others such as Tom Killick were ordained after playing Tests.

Stephen George Platten, TSSF is a retired Anglican bishop. He was the last diocesan Bishop of Wakefield in the Church of England. He was consecrated in this role on 19 July 2003 and immediately prior to that was Dean of Norwich from 1995. He was installed at Wakefield Cathedral on 19 July 2003.

Peter Robert Forster is a British retired Anglican bishop. He was the Bishop of Chester in the Church of England and a Lord Spiritual.

John Richard Packer is a retired British Anglican bishop. He was the only Bishop of Ripon and Leeds, serving from the renaming of the diocese from Ripon in 2000 to its merge into the Diocese of Leeds in 2014.