Karen O'Hara is an American art director. [1] She won an Academy Award in the category Best Art Direction for the film Alice in Wonderland [2] and was nominated twice, for The Color of Money [3] and for Ma Rainey's Black Bottom . [4]

Chris Newman is a sound mixer and director. His film credits include The Godfather, Amadeus, The Exorcist, The Silence of the Lambs, and The English Patient.

Rick Simpson is an American set decorator. He won an Academy Award and was nominated for another in the category Best Art Direction.

Lester Henry Fresholtz was an American sound engineer. He won two Academy Awards for Best Sound and was nominated for ten more in the same category. He worked on more than 110 films between 1968 and 1996. He died in March 2021 at the age of 89.

Donald O. Mitchell is an American sound engineer. He won an Oscar for Best Sound and was nominated for thirteen more in the same category. He worked on nearly 120 films between 1973 and 2002. 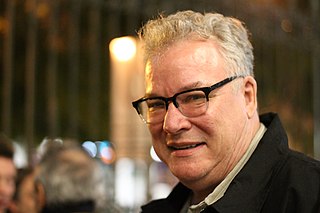 Tom Fleischman is an American sound engineer and Re-recording mixer. He is the son of film editor Dede Allen, and documentary producer, director, and writer Stephen Fleischman. He has worked on over 170 films since 1978. He won an Academy Award in 2011 in the category Academy Award for Best Sound Mixing for Hugo and has received four other Oscar nominations for Reds (1982), The Silence of the Lambs (1992), Gangs of New York (2003), and The Aviator (2004).

Rick Kline is an American sound engineer. He has been nominated for eleven Academy Awards in the category Best Sound. He has worked on more than 220 films since 1978.

Dennis S. Sands is an American sound engineer. He has been nominated for four Academy Awards in the category Best Sound. He has worked on more than 240 films since 1979.

The Dorian Awards are film and television accolades given by GALECA: The Society of LGBTQ Entertainment Critics, founded in 2009 as the Gay and Lesbian Entertainment Critics Association. GALECA is an association of professional journalists and critics who regularly report on movies and/or TV for print, online, and broadcast outlets in the United States, Canada, Australia, and the United Kingdom. As of May 2021, GALECA listed approximately 285 members. The awards recognize the best in film, television, and performance for the prior calendar year, with categories ranging from general to LGBTQ-centric.

Valli O'Reilly is a make-up artist.

Ma Rainey's Black Bottom is a 2020 American biographical musical drama film directed by George C. Wolfe and written by Ruben Santiago-Hudson, based on the play of the same name by August Wilson. The film, and its source play, focus on Ma Rainey, an influential blues singer, and dramatize a turbulent recording session in 1920s Chicago.

Kristina Gwyn Zea is an American production designer, costume designer, art director, director and producer in film and television. Born and educated in New York City, she discovered she had a talent for design while working as a stylist for a commercial photographer. Her career in production design blossomed in the 1980s and 1990s as she worked on numerous films for several directors—including Alan Parker, James L. Brooks, Jonathan Demme and Martin Scorsese, across a wide selection of genres, including period, contemporary, drama, and horror. She has also directed several HBO films.

The 93rd Academy Awards ceremony, presented by the Academy of Motion Picture Arts and Sciences (AMPAS), honored the best films of 2020 and early 2021. The ceremony took place at Union Station in Los Angeles on April 25, 2021 – two months later than planned – due to the impact of the COVID-19 pandemic on cinema. Nominations had been announced on March 15, 2021.