This is a list of bridges in the city of Toronto, Ontario, Canada.

Bridges over the Don River ravine, listed from south to north

Taylor Massey Creek is a tributary of the East Don River.

List of bridges over railway lines (to avoid need for at grade level crossings):

Other bridges over waterways

Numerous bridges on the Toronto Islands including:

The Frederick G. Gardiner Expressway, commonly known as the Gardiner Expressway or simply the Gardiner, is a municipal expressway in Toronto, Ontario, Canada. Running close to the shore of Lake Ontario, it extends from the foot of the Don Valley Parkway (DVP) in the east, just past the mouth of the Don River, to the junction of Highway 427 and the Queen Elizabeth Way (QEW) in the west, for a total length of 18.0 kilometres (11.2 mi). East of Dufferin Street to just east of the Don River, the roadway is elevated for a length of 6.8 kilometres (4.2 mi), unofficially making it the longest bridge in Ontario. It runs above Lake Shore Boulevard east of Spadina Avenue. 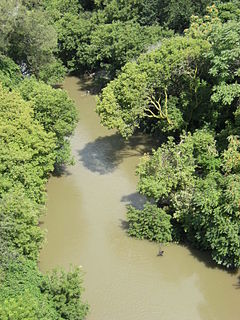 The Don River is a watercourse in southern Ontario, that empties into Lake Ontario, at Toronto Harbour. Its mouth was just east of the street grid of the town of York, Upper Canada, the municipality that evolved into Toronto, Ontario. Of the various watercourses that drained Toronto, the Don, the Humber River, and the Rouge River have headwaters in the Oak Ridges Moraine.

The Humber River is a river in Southern Ontario, Canada. It is in the Great Lakes Basin, is a tributary of Lake Ontario and is one of two major rivers on either side of the city of Toronto, the other being the Don River to the east. It was designated a Canadian Heritage River on September 24, 1999.

The Don Valley Parkway (DVP) is a municipal expressway in the Canadian city of Toronto, Ontario, which connects the Gardiner Expressway in downtown Toronto with Highway 401. North of Highway 401, it continues as Highway 404. The parkway runs through the parklands of the Don River Valley, after which it is named. It has a maximum speed limit of 90 km/h (56 mph) for its entire length of 15.0 km (9.3 mi). It is six lanes for most of its length but it is eight lanes north of York Mills and four lanes south of Eastern. As a municipal road, it is patrolled by the Toronto Police Service.

Humber River—Black Creek is a federal electoral district in Toronto, Ontario, Canada, that has been represented in the House of Commons of Canada from 1867 to 1904 and since 1917. Prior to the 2015 election, the riding was known as York West. The name was changed because the district is not located within the Region of York but within the City of Toronto.

William R. Allen Road, also known as Allen Road and The Allen, is a short expressway and arterial road in Toronto, Ontario. It starts as a controlled-access expressway at Eglinton Avenue West north to just south of Transit Road, then continues as an arterial road north to Kennard Avenue, where it continues north as the northern portion of Dufferin Street. Allen Road is named after late Metro Toronto Chairman William R. Allen and is maintained by the City of Toronto. Landmarks along the road include the Lawrence Heights housing project, Yorkdale Shopping Centre and Downsview Park. A section of the Toronto subway Line 1 Yonge–University is located within its median from Eglinton Avenue to north of Wilson Avenue, and briefly runs parallel to it underground in the vicinity of Sheppard Avenue. 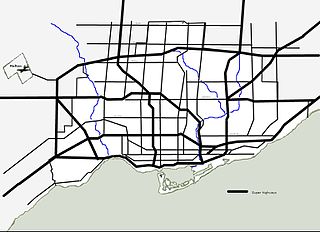 The cancelled expressways in Toronto were a planned series of expressways in Toronto, Ontario, Canada that were only partially built or cancelled due to public opposition. The system of expressways was intended to spur or handle growth in the suburbs of Toronto, but were opposed by citizens within the city of Toronto proper, citing the demolition of homes and park lands, air pollution, noise and the high cost of construction. The Spadina Expressway, planned since the 1940s, was cancelled in 1971 after being only partially constructed. After the Spadina cancellation, other expressway plans, intended to create a 'ring' around the central core, were abandoned.

Lawrence Avenue is a major east-west thoroughfare in Toronto, Ontario, Canada. It is divided into east and west portions by Yonge Street, the dividing line of east-west streets in Toronto.

Eglinton Avenue is a major east-west arterial thoroughfare in Toronto and Mississauga in the Canadian province of Ontario. The street begins at Highway 407 at the western limits of Mississauga, as a continuation of Lower Baseline in Milton. It traverses the midsection of both cities and ends at Kingston Road. Eglinton Avenue is the only street to cross all six former boroughs of Metropolitan Toronto. 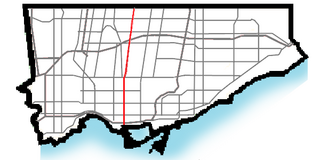 Bathurst Street is a main north-south thoroughfare in Toronto, Ontario, Canada. It begins at an intersection of the Queens Quay roadway, just north of the Lake Ontario shoreline. It continues north through Toronto to the Toronto boundary at Steeles Avenue. It is a four-lane thoroughfare throughout Toronto. The roadway continues north into York Region where it is known as York Regional Road 38. 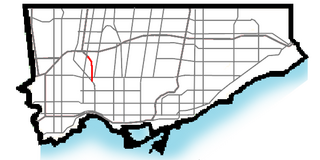 Black Creek Drive is a north-south super-4 expressway in Toronto, Ontario that extends from Highway 400 at Jane Street, near Ontario Highway 401 to Weston Road in the south. Originally intended to be a freeway extension of Ontario Highway 400, it was built instead as a super-4 expressway after public opposition to building freeways into central Toronto. The roadway is named after the Black Creek watercourse, and runs parallel to the creek for most of its route.

The Toronto Belt Line Railway was built in Toronto, Ontario, Canada in the 1890s. It consisted of two commuter railway lines to promote and service new suburban neighbourhoods outside of the then city limits. Both lines were laid as loops. The longer Don Loop ran north of the city limits, and the shorter Humber Loop ran west of the city limits. The railway was never profitable and it only ran for two years. Today, as part of a rails-to-trail project, the Beltline Trail lies on the right-of-way of the Don Loop.

The Road Emergency Services Communications Unit(RESCU) is a traffic management system used by the City of Toronto on city managed highways. The system is used to monitor traffic on:

Transportation in the Canadian city of Toronto forms the hub of the road, rail and air networks in the Greater Toronto Area and much of southern Ontario. There are many forms of transport in the city, including railways, highways, and public transit. Toronto also has an extensive network of bicycle lanes and multi-use trails and paths.

Dundas Street, is a major historic arterial road in Ontario, Canada. The road connects the city of Toronto with its western suburbs and several cities in southwestern Ontario. Three provincial highways—2, 5, and 99—followed long sections of its course, although these highway segments have since been downloaded to the municipalities they passed through. Originally intended as a military route to connect the shipping port of York to the envisioned future capital of London, Ontario, the street today connects Toronto landmarks such as Yonge-Dundas Square and the city's principal Chinatown to rural villages and the regional centres of Hamilton and London.