Quo Vadis is a restaurant and private club in Soho, London. It primarily serves modern British food. [1] It was founded in 1926 by an Italian named Peppino Leoni and has passed through numerous owners since then, including the chef Marco Pierre White, and is currently owned by Sam and Eddie Hart, also the owners of Barrafina. [2] The restaurant is named after the Latin phrase Quo vadis? , meaning "Where are you going?" [3]

The restaurant was founded in 1926 by Peppino Leoni. [6] When Leoni originally opened Quo Vadis in 1926, it only occupied No. 27. He purchased the property, with the aid of a bank loan for £800. Its moniker was alighted on after Leoni saw a billboard in Leicester Square advertising a film of the same name. Quo Vadis is Latin for "Where art you going?". The cinematic epic, adapted from Henryk Sienkiewicz's classic 1896 novel Quo Vadis, was the highest-grossing film in 1951. [7]

In 1996, the restaurant was bought by Marco Pierre White and Damien Hirst, and featured paintings by the artist as well as a bar designed by him. The pair later parted company after a public falling out, following which White replaced Hirst's paintings with some of his own. [8] [9]

In November 2007, head chef and owner Marco Pierre White sold the restaurant, along with two others, to restaurant group Conduit Street. Quo Vadis was then sold on again to Sam and Eddie Hart, who immediately closed it down. Both White and the Hart brothers endured criticism as Christmas bookings were cancelled. [10] [11] The Hart brothers re-opened the restaurant in 2008 with head Chef Jean Philippe Patruno (previously at Fino) following extensive restoration work and, in 2009, it won Tatler magazine's Restaurant of the Year award. [12]

In July 2008, celebrity chef Gordon Ramsay named Quo Vadis as his favourite restaurant, describing the Hart brothers as "restaurateurs in the fullest sense of the word". The Evening Standard characterised this praise as a "thinly veiled attack" on Marco Pierre White, with whom Ramsay has an antipathetic relationship. [13]

On the front-right of the restaurant is curious sight of a human nose. While rumours of connections to ancient Roman legends of traitors having their noses cut off and fed to animals have sprung up, it is one of several London Noses.

In September 2012 the QV Bakery was launched and a month later in October 2012 Quo Vadis began offering breakfast. Chef Jeremy Lee's menu of early morning favourites is "inspired by the iconic restaurant's British and seasonal fare." [14]

Quo Vadis under its current ownership has received generally positive reviews. Tatler has listed it as one of its top 20 restaurants, [15] in July 2008 The Times reviewer Giles Coren gave the restaurant a score of 9 out of 10, describing the food as "all done beautifully" [16] and in June 2008 The Telegraph 's reviewer, Jasper Gerard, gave it 8 out of 10 and said that visitors would "adore the cooking". [17]

Tracey MacLeod of The Independent was less positive, giving the restaurant 2 out of 5 for ambience and service, although 4 out of 5 for food. She described the waiters as "skittish" and said that the Hart brothers were "not natural hosts". [18]

In January 2012 Fay Maschler of the Evening Standard gave Quo Vadis four out of five stars, stating "The combination of lovely Jeremy Lee, the hard-working Hart brothers and "Spitz" is the dream team of which my nights are made." [19] In February 2013 Giles Coren reviewed Quo Vadis in The Times Magazine, describing the menu as 'simple, perfect', the smoked eel and horseradish sandwich as a 'must-have' and the squid and fennel salad 'clean and dainty' [20] Also in February 2012 Nick Lander wrote a review of Quo Vadis in the Financial Times, calling the cooking "exciting, vibrant and fresh." [21]

Giles Robin Patrick Coren is a British food writer, and television and radio presenter. He has been a restaurant critic for The Times newspaper since 1993, and was named Food and Drink Writer of the Year at the British Press Awards in 2005. He has co-starred with comedian Sue Perkins in The Supersizers... series and with chef Monica Galetti in the Amazing Hotels – Life Beyond The Lobby series. 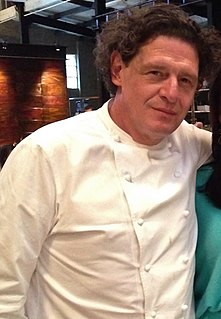 Marco Pierre White is a British chef, restaurateur, and television personality. He has been dubbed the first celebrity chef, and the enfant terrible of the UK restaurant scene.

Jason Atherton is an English chef and restaurateur. His restaurant Pollen Street Social gained a Michelin Star in 2011, its opening year. He was the Executive Chef at Gordon Ramsay's Michelin starred Maze in London until 30 April 2010. In 2014 he co-hosted the Sky Living TV series My Kitchen Rules.

Elisha Carter is a British chef who appeared in the BBC television series Great British Menu in 2008. He is Head Chef at The Landau restaurant located in The Langham, London.

Jeremy James Lee is a British celebrity chef and chef proprietor at Quo Vadis, London. He had previously been head chef at the Blueprint Café for eighteen years.

Rhodes Twenty Four was a Michelin-starred restaurant located in the City of London. Run by celebrity chef Gary Rhodes, the restaurant was located on the 24th floor of Tower 42, formerly known as the Natwest Tower and operated between 2003 and 2014. 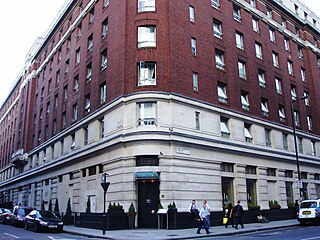 Rhodes W1 was a restaurant located in London, England. Opened in 2007, it gained a Michelin star within a year of opening in January 2008. It served European cuisine, and was one of two Rhodes restaurants in London to hold a Michelin star. It is now closed.

Roussillon was a restaurant on 16 St Barnabas Street in the Pimlico district of London. It held a Michelin star from 2000 until 2011. The restaurant's name comes from the village in the Lubéron rather than the Catalan region.

La Tante Claire was a restaurant in Chelsea, London, which opened in 1977 and closed in 2004. Owned and operated by Pierre Koffmann, it gained three Michelin stars in 1983, and held all three until the restaurant moved premises in 1998. It was sold to Gordon Ramsay for his flagship restaurant, Restaurant Gordon Ramsay.

Mirabelle was a restaurant in the Mayfair area of London. It opened in 1936, and became popular during the 1950s and 1960s, with some celebrities being regulars. Chef Marco Pierre White owned it from 1998 to 2007, and it earned a Michelin star in 2000 under head chef Charlie Rushton, and kept it until its closure for refurbishment in 2008. It remained closed until the site was demolished in 2016/17.

Harveys was a restaurant in Wandsworth, London, run by chef Marco Pierre White between 1987 and 1993. Its French cuisine was warmly received by food critics, and it was named Restaurant of the Year by The Times in 1987.

Jimmy Lahoud is a Lebanese businessman and restaurateur in London, England. He has owned restaurants such as Quo Vadis, L'Escargot, and Café St. Pierre. Lahoud is an art collector, displaying his Picasso, Miró, Chagall, Warhol and Matisse pieces in at least one of his restaurants. Lahoud is credited for launching the career of celebrity chef Marco Pierre White. With White, Lahoud established White Star Line Ltd, which owns the Belvedere Restaurant.

Jeff Galvin is a London restaurateur who, with his older brother Chris Galvin, has established a number of high-profile restaurants.

Bocca di Lupo is a small Italian restaurant on Archer Street in London's Soho district which was rated the best London restaurant in Time Out magazine's 2009 listing, and won the "Best Wine List" award in Tatler magazine's 2013 restaurant awards, as well as a Michelin Guide "Bib Gourmand" award. The Time Out award was attributed partly to the restaurant's bargain prices, which increased significantly as its popularity grew. Bocca di Lupo serves cuisine from a variety of Italian regions, with each dish's origin labelled on the menu.

Chutney Mary is a fine dining Indian restaurant in London, founded in 1990 by Ranjit Mathrani & Namita Panjabi through their restaurant company whose current name is MW Eat. It has received considerable critical acclaim over the years. It was originally in Kings Road Chelsea, but relocated to St James's, London in 2015.

Luca Alessandro Longobardi is an Italian entrepreneur, a venture capitalist and investment banker. He gained attention for being wrongfully arrested and spending a month in a maximum security prison in Brazil, during which period he became known as "the mafia's banker".